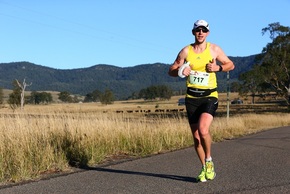 The Hunter Valley running festival is a bit of a mixed bag - beautiful NSW countryside to run through is a plus but at this time of year that is tempered by a tough course, cold temperatures and often unfriendly weather. In 2009 the 10KM event was my first ever fun run and I'd done it in 2010, 2011 and 2012, with last years in particular being held during pretty horrible conditions. The positives won out for me though, especially combined with that addictive buzz that comes from bettering a time year-on-year, which i've done each year on this particular course. So I entered the 10K months ago and went about the business of training.

Over the last couple of months that training has consisted of a Pete Pfitzinger marathon plan as I gear up for my debut marathon and it's this which led me to switch my entry to the half marathon. At the end of the 9th week in my plan the running festival was set to fall exactly half way through the training plan and on the same day as a scheduled 34km long run. With some trepidation I decided to switch from the 10K event to the half marathon under the assumption that the longer distance would better fit my training and also give me a better indicator of where my endurance was at.
Fast forward to the day of the event and my I still had very mixed feelings about the event; my eldest son (3) had only recently spent a week admitted to hospital with viral meningitis, I'd had a bout of gastro Thursday night/Friday that had left me feeling drained and I was in the middle of a move from Lake Mac to Armidale, having driven there and back the day before the race. On the other hand, the Pfitzinger plan seems to have really been working for me with strong runs completed solo in training and with the Flyers on Sunday mornings. My half marathon PB was 1:26:07, set on another tough course in April at Hill to Harbour and my goal for the Hunter Valley, especially in light of recent circumstances, was to equal or beat that time. When I got to the Hunter Valley Gardens at 6:30am it was only about 6 or 7 degrees but by the time the race briefing came around it was several degrees warmer, the skies were clear and blue and there was no sign of wind. Pretty ideal conditions really. Spotted Phil milling around setting up his Hope Alliance stall and when we gathered for the race briefing I saw Travis and Scott Westcott. That was when I knew that at least two places in front of me were taken!
I got away pretty clean at the start considering the narrow path at the beginning of the course, managing to get pretty spot on 4:00/km pace. I passed a fair number of people over the first 3 KMs and tried to mentally prepare myself for the 4th which has the steepest hill on the course and is, to put it bluntly, a real bitch. I've been doing much more elevation in my running over recent months though and the most recent Flyers long run I'd done had really shown me how much my hill running has improved so I settled in and worked my way up, passing a couple of people on the hill, including Tim Lang, though I didn't know it was him at the time. 4:21 for the 4th kilometre, a fair bit better than the 5:06 I did in the 10K last year. I then hammered it downhill, putting in a 5K pace split followed by 3 at 10K pace. Once we got out onto the half marathon/marathon specific section of the course I was in uncharted territory and while I knew it was rolling I wasn't quite sure what it would be like. There was a fairly long flat section and the hills were fairly long too. Not hugely steep, but they lasted, giving time to open up the throttle on the way down and make it sting a bit on the way up. As we got out onto this section I was overtaken by a chap wearing a turban who i've seen at events before. Not sure who he is, but he came flying past me and worked his way into the distance pretty quickly. Immediately after the turn around was perhaps the hardest part of the race for me. Coming back up DeBeyers Rd there was a bit of wind and my pace definitely slowed a bit, with my second slowest KM at 4:15 coming up one of the inclines. Tim Lang caught me here and after that we traded places a couple of times before he pipped me for the final time at about 9.5km and refused to let me get the better of him after that. One thing I don't like about this course is the layout of the final kilometre as it takes many sharp turns this way and that as it works it's way through car parks and back into the gardens. It just takes the edge off being able to really hammer it home.
Coming into the finish I saw 1:50:xx on the clock, which had started with the marathon. Not having looked at my watch for a while I wasn't sure of my time but I heard Dave Robbo say my name and start it with 1:22 and produced an impromptu fist pump. Not really a fist pumper, but hey, it was a big result. A 3+ minute half marathon PB, much better than I had been hoping for and a real indicator that my marathon training is producing results. This year H Events had live web streaming of the event and I hope that becomes a common occurrence. My boys were at home with their Grandad, who streamed the finish from the iPad to the Apple TV and they got to watch me finish. As far as they were concerned, Daddy was 'on TV' and they were really excited about it. That was a nice bonus when I got home.
Powered by