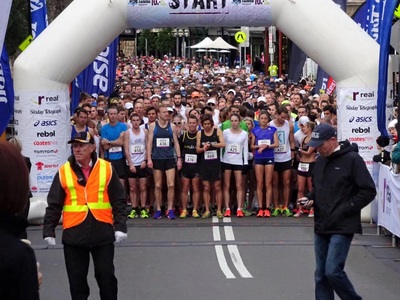 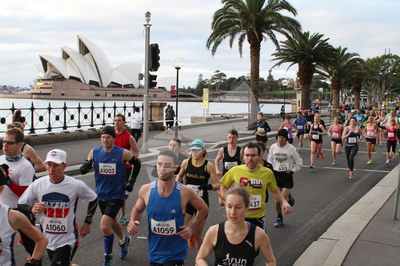 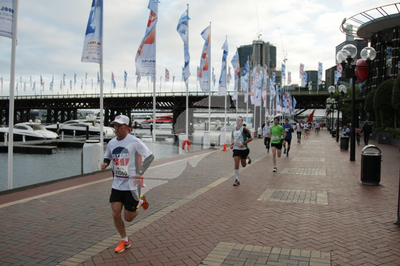 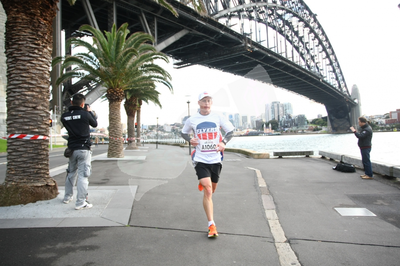 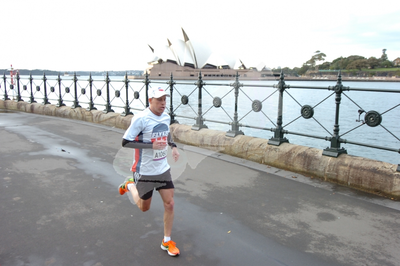 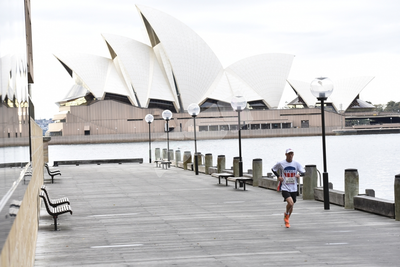 The Real Insurance Sydney Harbour 10 was held last Sunday 12th July 2015. Several Flyers and other Newcastle runners made the trip for what on paper looked like a flat and pictureous course.  From my recollection, we had Paul Murray, Regina Jensen, Anna Nunn, Kyle Pinkerton, Scott Sam, Felicity Gamble, Cyril and Mandy Murtagh taking on the challenge. Paul was aiming for 34 mins. Sub 37 minutes were secret goals of others I hear, so did they also perform?  Then there’s Kyle with a previous best of around 35 and a half.  He smashed this by 1 and a half minutes, finishing just behind Paul.
Paul had been pestering me since the Sydney 10 in May to do this race. I left it to the last minute, eventually registering on the Thursday before the race… just before the doom and gloom weather forecasts began pouring in.  It was going to be cold.
I have been running on and off for the last 25 years and two years ago a good 10K for me was 41 minutes.  My training before joining the Flyers was just to do a 9-10K run a couple of times a week and just go hard... not too scientific.  Breaking 40 minutes was my first goal and I found I really enjoy the Flyer sessions. Everyone was saying, give it 6 months and you’ll notice results and sure enough I was soon breaking 40 minutes.
I broke 38 minutes at the Sydney 10 in May this year.  Could I get under 37 minutes 2 months later?
The lead-up week was not the greatest with a respiratory infection early in the week knocking me for 6.  I was out of breath walking up a flight of stairs.  How was I going to do 10K’s?  Anyway, each day I felt 10% better and by race day I guess I was nearly there.
There were almost 4000 runners doing the 10K and I had registered for the A group…but still would be a fair way back.  Paul said just wear a jacket and come up to the preferred starting area and act like a pro and do warm up drills, etc.  Well, did this and got busted when an official asked to see my number and then asked me to return to the ‘hoard’.  Paul then butted in and said “but he’s here to do a PB!”, whereby the official replied  “Oh.... so he’s with you?  That’s OK then”.  Mr Murray, you definitely must look the part of a coach as I guess that’s what he thought… so thank you Paul for getting me a good start.
So, still in the preferred start list, I did the honourable thing and still went to the back of that group… maybe 10 rows back.  Reggie also wanted to do a sub 37 so it would have been great to run together... but my race plan involves starting off slower and building up pace, usually with negative splits.  She likes to start fast, so I said just go for it and I’ll see if I can catch up.
The gun goes and off we go.  I plan to try sit at 3.40 pace for as long as I can and hopefully have some left at the end.  The weather was not as bad as expected.  The rain had been early in the morning and out of the wind it was quite pleasant… but there were sections of the course running into a strong headwind that was just icy. The plan was going well, slightly ahead in pace at 5K.  I could see Reggie about 100m ahead and it took me about another 2K’s to catch up with her.  Going up over the Pyrmont Bridge was tough I admit, after being spoilt by so much flat for the first 6k’s.
So, I’ve managed to pull up beside Reggie around 7K.  Still feeling good and hoping to continue with the pace.  Then at 8K, on a slight decline, I get the sudden feeling of exhaustion and just can’t sit with 'speedy' anymore, so again I am watching Reggie’s butt go off into the distance.  Strange, but at 9K, I’m feeling better and can push home.  Must have been all the photographers at this end of the race and the backdrop of the Opera House giving me strength. 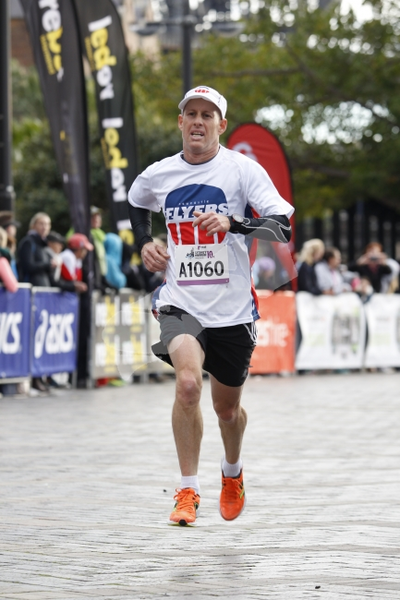 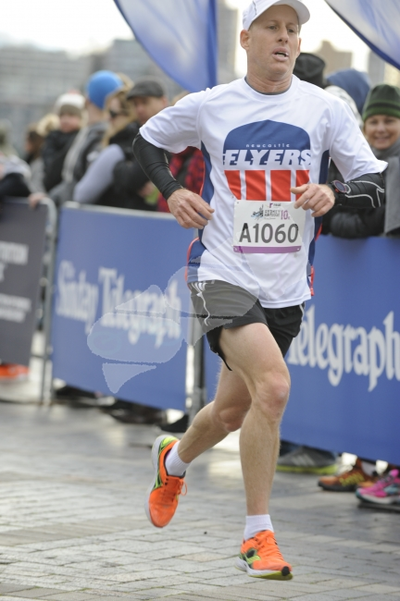 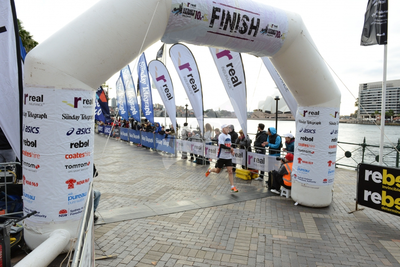 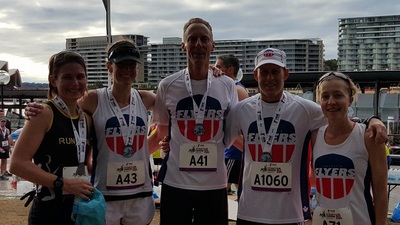 Crossing the line, I see the clock click over 37.02.  So close, but then look at my watch and see 36.58.  There is hope!  As it turns out, the gun time is 37.02 and my nett time is 36.58 - I'll take that.  New PB thank you very much and very happy.  Reggie has finished in 36.52, also a new PB and goal met.  6th female overall and 2nd in her age.  Some prize money coming her way.
Paul just missed going sub 34 again (also 2nd in age category), and Kyle was just two seconds behind  at 34.11 (3rd in age group), smashing his old PB by nearly a minute and a half.  Anna also scored a PB at 38.14. Every race this girl just keeps shedding time. Cyril smashed his time from the same race last year, going 39.25 and his wife Mandy also having a great time of 50.25. Felicity has also rocked over the line in 40.30 and lined up with the flyers for some post race photos. They are super good looking... check them out on FB.
For me, it was then off to Hungry Jacks for some breaky.  You’ll eat anything after a tough day at the office!
Finally to end this race review, I wish to acknowledge the great bunch of runners in the Newcastle Flyers. I am so grateful to everyone for all their advice at intervals and long runs.   RP sets a great program and I encourage anyone starting out to follow RP’s guide, be patient, stick with the program of 2 speed sessions a week and a long run.  It does work.
Powered by