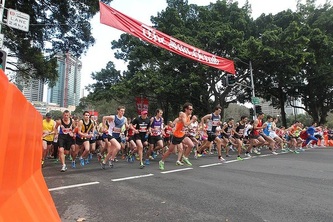 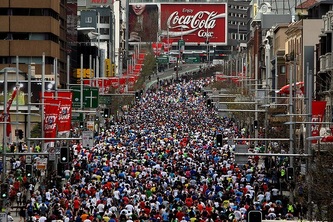 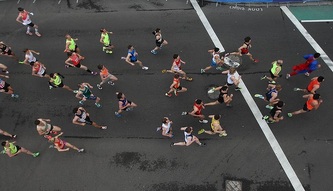 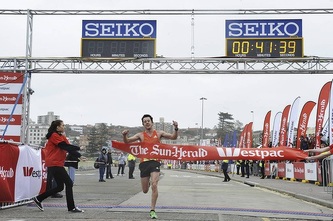 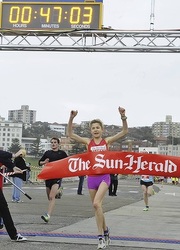 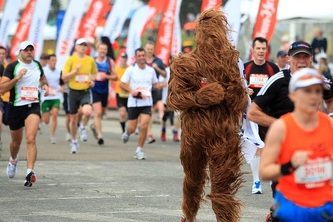 Race Date: August 12th    Results: 2012
When I first ran the City to Surf back in 1984 I turned up on the morning of the race and entered at a stall next to Town Hall. I had only decided to run it the day before as it looked like a great community event. As a result of my late entry I had one of the last numbers of the day which was 44272. There was only one start and the race began at 10am. I started near the back and shuffled over the start as the 44 thousand other runners in front of me started moving and began my run to Bondi. Just after exiting the Kings Cross tunnel I noticed a helicopter very low and close to the overhead train lines. This seemed strange but I kept running watching to see what was happening when right in front of me the helicopter lost control and crashed on the Sydney Grammar oval. No one was hurt but it made for a very memorable first fun run experience! I finished and was hooked. Time was 63min.
It’s now 2012 and it’s my 20th time racing this fun run. The estimated number of runners is now 85 thousand and there are 4 start groups and the race begins at 8am.
Woke up to grey skies and wind but no rain. Nice easy drive to Oxford street where I park and jog down to the start to put my bag in for the end with a few warm clothes this year. Start is always a social occasion catching up with many running mates and hearing all the excuses from many runners as they wait to be herded into the start. Conditions were not too cold and the rain was staying away but the big question was the wind which we all knew was blowing a gale at Bondi. Great to see a good turn out from Newcastle this year with Nath, Kirsten, Simon, Michael, Damien, Celia and Mike Beasty up the front with the preferred and seeded runners.
Australian Anthem sung and bang we are off. Usual fast ones take off to get to the front and get on the TV. Everyone else just concentrates on staying upright and getting to the tunnel in one piece. Down through Rushcutters bay and the pace lifts followed by a hill to Edgecliff and down into double bay were its 3km done and dusted. First 5km is a tough one to judge as it is a rollercoaster of a ride and the aim is not to go out too hard but not too slow. Judging your pace even with a Garmin is tricky. 5km target is 17.30 and get there is 17.26 so travelling ok.
Now for the second 5km which is tough. Time to pick up the pace and work hard up the hills as the target for this 5km is 18.30(never easy). Work the hill up to 7km and feel the wind at our backs towards the top of heartbreak hill. Run hard of the top of the big hill and get to the 8km in under 30 minutes so know everything is on track. Turn the corner to head south and bang the southerly hits you in the face. This is going to be a tough 6km. Coming into this race I am caring a back injury thanks to my 3 year old jumping on me a couple of weeks ago so the downhills hurt! Run as hard as I can comfortably to 9km and then more uphill to 10km. Check the time and not too bad but its not going to be a fast one today. 18.47 for the second 5km so 17 seconds slower than I had planned. (36.13 for the first 10km)
Last 4km. This is the critical part of the race that either you run well and get a good time or you suffer and get home. Never easy and it has almost 2 km of downhill which I was not looking forward too. I pushed on and ran as hard as I could to the downhill section then just ran a controlled downhill section trying not to reinjure the back. Got to the bottom and the last km. Picked up the pace but the wind made it hard as it was relentless. Turned at the end of Campbell parade and ran the finish shute to the beach. Clock ticked down as I approached and it was another 50 minute run. If you look below I have listed all my 20 runs and you will see there are a lot of 50 runs and so far only one 49 run. Next year I will be back to try again.
Great runs by Celia to take out 4th Female and Nath who ran a PB.
Powered by