After living off the success of ticking off my approx. 10 year marathon goal, for way too long, (over 18 months)… *see 2017 Race Report …the plan was to run another Marathon in 2019, fitting into a broader Team Robbo plan of Gab and I running qualifying times to get us into Boston Marathon 2021.
The window for 2021 Boston qualifying opens mid-September with the Blackmores Sydney Marathon lining up perfectly. So the plan was I would run Sydney, and Gab would run Melbourne Marathon a month later.

Although my 2018 didn’t include a Marathon, it was still a fairly consistent year of running highlighted by a 10km PB at the Gold Coast and continuing the running streak (minimum 5km per day) which began late December 2016.

Gab and I ran the Central Coast Half Marathon together in Nov 2018 and this kicked off the ‘training for training’ phase of the Marathon build-up for both of us, racking up consistent weeks of hitting the long runs and gradually increasing the mileage (apart from an outlier 150km week for me in December…nothing gradual about that hey John Doyle?!)

Inspired by Bridey Delaney’s advice that 20 weeks of consecutive long runs create the environment for endurance adaptation magic to occur, that was the initial goal for both Gab and I, plus Suzie Field who along with Gab had formed a great training partnership.

As the end of the 20 weeks came close I started looking for an event to jump into, and realised the weekend after Long Run #20 was the Newcastle Marathon (early April 2019). A good chance to see where the fitness was at, but treat it more like a long training run.
From here, I started to build up the training a bit more, targeted around some more intense interval sessions plus expanding the long runs. I had entered the Gold Coast 10km once again and was looking to have another good crack at it, while at the same time adopting more or a marathon-specific preparation mindset.

It was great to link up with fellow Flyer, Josh Griffiths who was training seriously for a tilt at another Gold Coast Marathon PB in July. I started jumping into some of his long run sessions to see if I could hold on, which on occasion I was able to do.

A key session in my usual 10km race build-up has been a 3x3K session a couple of weeks before race day. This time I did it at the Blue Track helped out by Simon White, Maddog and Griffo. I hit this one really well and took a lot of confidence from the session, expecting it to translate into a big race coming up on the Gold Coast.

Newcastle running legend, Alan McCloskey had recently told me he reckons every runner only has 4 total good runs each year. I think I probably used one of these 4 with this session. Unfortunately the actual race I was training for ended up being a long way off making the top 4!

But although my 10km race didn’t work out too well, it was awesome to see all the hard work and preparation Griffo put in, paying off big time as he nailed a PB at the Gold Coast which I was lucky enough to call on the Live Stream.

Next I planned a 9 week marathon specific build-up to take me through to race day in Sydney. I broke this down as follows: 3 week build up, 3 week biggest, 3 weeks pull back/absorb.

A 4 week World Tour assisting Paratriathlete Lauren Parker at various races and training camps, coincided with the second half of this 9 week build-up. Although we were pretty busy I was able to fit the training in around the travel which took in Japan, France, Scotland and Switzerland…very lucky I know!

Coming off a very hot and humid week in Tokyo where I pretty much just jogged for the week, I got to France where it was a lot cooler, looking to hit some of the key sessions and long runs. My biggest week of training (145km) also took in my longest long run which ended up being 42.2km. The session was planned to be 38km (including 3x5km at goal marathon pace) but feeling good, I added a bit to it to hit the marathon distance.
​
The total weekly kilometres for these final 9 weeks looked like this:

Two key things I aimed to focus on in the final 10 days of the campaign were massage and sleep. In hindsight I think I would add more massage sessions in over the final 9 weeks when the training ramped up. But in the final 2 weeks it was definitely welcome to freshen up the legs. Big thanks to Fran Turner for sorting me out.
​
In the final week before a marathon i set a goal of trying to get 60 hours of total sleep. Knowing it is unlikely to happen, it still serves as a good extra motivator to get to bed early and maximise sleep time in this important final stage of preparation. This time though I did manage to total 59 hours across the final 7 nights.
​
Eating well is also important so I try to get good field in plus proactively use olive leaf extract to boost the immune system and I also added in magnesium tablets plus sodium later in the week.

I wake up early, 4:30am…shower, eat banana, peanut butter toast, coffee, sip Tailwind. The weather conditions look pretty good, expecting it to warm up towards the end of the race but spot on to begin with: 11deg at 7am, getting up to 20deg by 10am, 15km/h wind and high humidity early then falling.

I get a lift from the support crew to the start in Kirribilli with plenty of time to find a choice final toilet option and start to loosen up.

​I catch up with a friend Andrew Leigh for a warm up under the Harbour Bridge. He is looking to run at a similar pace to what I’m hoping for so will hopefully be a good help if I can stick with him.

While being a bit gross, it is a huge advantage not to have to stop at a portaloo. And so with wee all down my leg I crossed the 10km timing mate received and still feeling good.

The shade of the trees inside the park is helpful and so far the conditions are still cool and calm with only a light breeze. We pass Jane once again who gives more reassuring cheers and its a great feeling to be exiting the park and ticking off another 5km segment.

Back past the SCG and I’m feeling fantastic! I take a moment to soak it all up and feel grateful for the opportunity to be out here running. Through half-way now and the ‘warm-up’ is heading into the final stages.

Half-way: 1:23:00
As we roll back down Oxford Street I notice Andrew has fallen back a bit, possibly mildly disgusted at my ‘weeing on the run’ antics, wanting nothing more to do with me! Its good to have a few other runners around to keep pushing things along.
​
Back through Hyde Park and it is a huge boost to have Team Robbo waiting once again with a big cheer!

Towards Martin Place now and a chance to grab a quick breather on the downhill section offered here.

20-25km: 19:38 (3:56/km)
As the course winds down behind Circular Quay and onto The Rocks, you’re provided with a little mental punch in the arm being so close to the final destination of the Opera House, but still with the hardest part of the journey ahead.

In saying that I find the usually grinding Hickson Road section, just after going under the Harbour Bridge, easier to run this year, with lots of construction works around making the road narrower and somehow feels less of a dead spot.

Clearly in a rush to reach the end of the warm-up (30km) and establish how I’m feeling before things get serious, I do my usual move of unintentionally speeding up a bit at this point. I get there and am pleased to still be travelling pretty well but definitely a little cautious about what is coming.

25-30km: 19:29 (3:54/km) / 30km split: 1:57:30
From 31km onwards, what I now refer to as the ‘nasty’ Pyrmont section kicks in. There’s really nothing too terrible about it but I find there are a few rhythm-breakers to encounter in this section including a number of fairly sharp turns, rises in the road, surface changes, plus it also seems to be the most exposed and hottest part of the course.

Still, even though it is definitely getting warmer now, I get to 35km, slowing a bit but still holding it together.

30-35km: 20:30 (4:06/km)
Just before getting back onto Hickson Road at around 39km, I’m startled as I’m joined suddenly by Andrew Leigh once again. He gives me a cheer as he powers on heading for another super impressive marathon time of 2:48:07.
​
Around the park at Barangaroo, the Sydney Striders lads driving the 2:50 pace bus come past. I would desperately love to jump on with hem, and my heart rate and breathing definitely feel well under control enough to hold the pace. Its just these super touchy hamstrings that are spooking me and lead me to continue cautiously, even though there’s now only 2km to go.
​
35-40km: 22:17 (4:28/km) 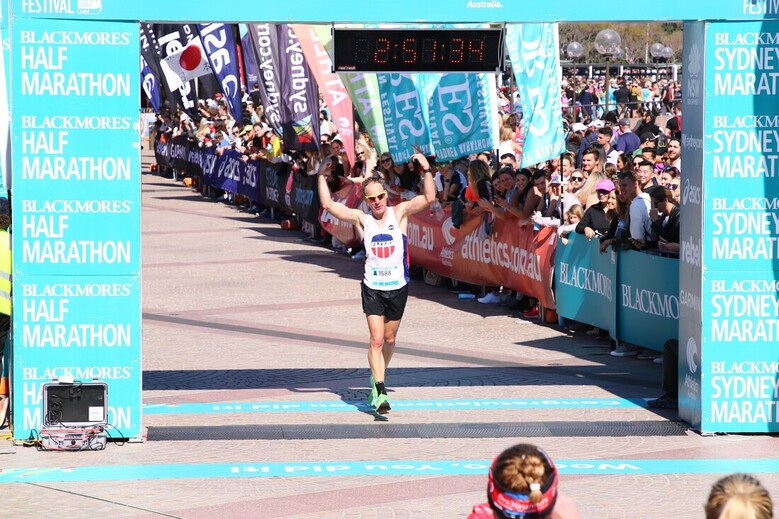 It was probably the best I’ve felt immediately after the race, jumping around a bit, having a chat with Reidy on the mic, obviously on a high. I probably felt like I’d done my warm down already with the way I slowed down in the final 2.2km.
Before long there are celebrations with fellow Flyers, Ingrid (2:52:42), Russ (2:57:00) and Kim Rackemann (3:10:51) who have all had amazing runs. I think Ingrid is a little shocked to hear that she has won the Australian Marathon Championships.
Back over the bridge one final time for the day, via train, then transition into recovery mode which is highlighted by a post run burger and beer.

Having experimented in training plus a number of races now, I have a plan I work towards which aims to hit the upper limits of what can go in without stressing the gut too much. It means I’m pretty busy having a picnic every 5km but it definitely pays off to keep on top of it.

The schedule looked like this:
TOTALS
No gut issues on the run. Pretty happy with the plan and how it all worked out.

Not sure if 1-2 more cramp fix sachets could have helped in the final few kms.

Its the first time I’ve used Crampfix through-out a marathon and I think it worked well. It operates to not only provide a solid hit of sodium (along with a small amount of carbs), but the harsh vinegar taste is designed to act on the nervous system to reset the signals being sent to the muscles and ward of cramps. Whether this is actually happening or not, each time I had one I felt like I got a smack in the face and it seemed to provide benefit.

At a couple of points in the run I actually spilt a bit of the sachet on my singlet and leg, which I felt sting the skin a bit. FYI, the Lemon sachet is by far my favourite flavour.

I find Tailwind to be very easy to take on board, and used the caffeinated Tropical flavour for all drinks. Having  a crew on course to provide bottles is obviously a big help.