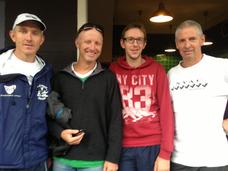 This was my second trip down to a Striders 10k event and I was very keen to try out the North Head course. In the mid 70s I used to run the Harbord Diggers 14k race that went from Freshwater Beach to the top of the head and back. Thankfully this time we run along the top and don’t have to tackle the steep Darley Rd.

It was a wet, cold and windy morning – and dark when I arrived.  Striders events are VERY well run (cf. Some other more local experiences we have all had!!) and there are volunteers out on nearby roads guiding you into unfamiliar territory.  The registration process is smooth and there is a nice vibe to these events (though not quite in the league of newy Parkrun).
Having connections down there (I grew up in the area and even went to Manly Boys High School) I stayed overnight and met up with the Newcastle lads (RP, Dave Mantle and Matt Hutton) at 6:30 am for a warm up. RP knew the course and pointed out a couple of things to watch out for.  There are spectacular views of the the heads and the harbour from this high vantage point though you don’t get much of a chance to take it in (that’s if you concentrate as much as I do during the event).
The three of us watched with interest to see if and how RP would get into the front row (he did but we’ve been sworn to secrecy!). We self seeded and I tucked in behind the 40 min pacer.  After a briefing we were off. With over 280 starters (not bad given the conditions over the weekend) it was a pretty congested start and we quickly had to move to the left of the road to position outselves for a 180 degree turn under the stone arch. This is where we hit some longish but gentle uphills and a pretty strong headwind. I managed to gradually work my way up to the pace guy and there was a reasonable size “bus” in his wake.  The two and a bit loop course gives you plenty of opportunities to see what is happening throughout the race – so you are a participant and a spectator and can cheer on other “Flyers”.  RP was nicely settle in at the pointy end of the field with DM not too far back and MH looking like he was on course for his 38 minute target.
Nearing the 5k mark I started to fall a bit behind the pace group after we were told we needed to pick up the pace a bit (even though I later found out – in post-race garmin anaysis – that I went through 5k in 19:47.  I think the pacer knew what I was about to find out – you turn around at the arch for a second time and the wind hits you hard and you know the next 2k is uphillish and hard work.)  I put in two x 4:25 /kms  and then had no chance of going sub-40 – though for a little while I sensed I was pulling back a few metres.  Over the last couple of kms I was able to minimise the loss and concentrated on keeping good form and posture as I got tired and blown around. Overall I was happy with 70th in 41:19 (and thoroughly enjoyed the event.  RP finished 7th in a smart 35:32 and somehow managed to finish in the 45-49 age group (even though he claims to be younger!).  DM finished 23rd with a creditable 36:46 with a happy MH 33rd 38:17. We all beat in Keith Batemand a multiple 55-59 year old world record holder – who is coming to Newcastle soon for the Naked Runners seminar on longevity in running.  I think maybe Keith was just taking it easy …. and while I didn’t get my goal time I’ll clam this as a scalp.
Visitors pay $20 to compete and you feel that you get good value for money – for a very well run event.  Post-race there is an abundance of snacks, fruit, junk food, cans of drink and even protein milk drinks. If I had one suggestion for SS – that would be to acknowledge that “visitors” actually do have an age – this nor category positions are shown in the results.  I suspect it’s a ploy to sign you up as a member.
Then it was coffe in Manly in the appropriately named “Barefoot” café – run by an old school mate of mine whom I’ve only recently reconnected with … and discovered with the help of facebook that we were born on the same day.
A good day was had by all … though the others hit a massive hold-up on the F3 on the way home.  Then the four of us …. and a whole stack of others … were at Merewether the next morning (well I was a few minutes late) for the Sunday long run.
The Sydney Striders 10k series is held on the first Saturday of the month and rotate around three venues (Homebush, Lane Cove and Northhead). Starting at 7am it means an early start – but you are home in good time. Well worth thinking about running one at least every now and then.
Powered by