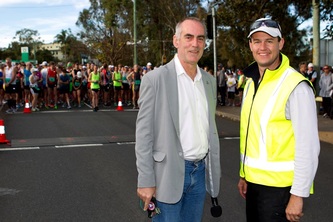 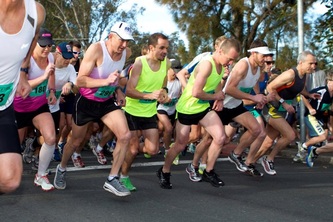 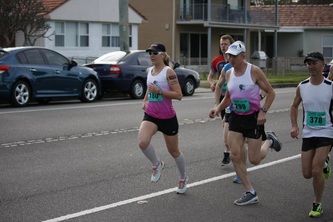 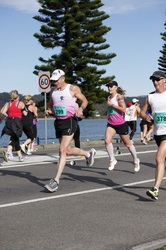 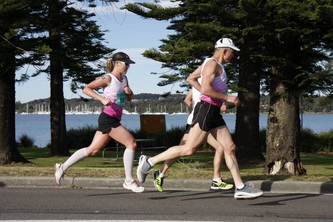 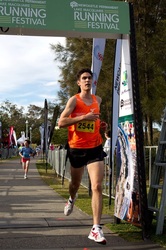 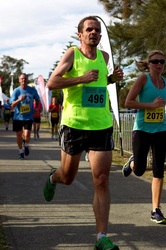 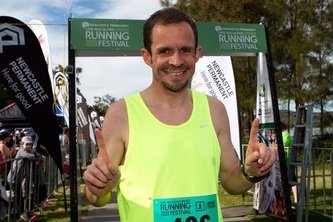 Race Date: August 26th    Results: 2012
I have been copping a hiding at the interval sessions for almost twelve months now and have been running the long run from Surf House since February. Against my better judgement, a couple of weeks ago I agreed to tag along with RP and Kirsten in an attempt to break 80 minutes. Given that my pb was 83:30 it was always ambitious.
We had perfect conditions on race day. It was cool and there was hardly any wind. RP, Paul M and Kirsten held up the start as they signed autographs and chatted with their fans. Eventually they got behind the start line so that Greg Piper could get us under way.
The first km was fantastic fun being up with the leaders with a big crowd cheering us on – I would have been happy to call it a day after that experience. We quickly settled into a pretty solid pace with RP leading the way and Kirsten and I following. I could feel that we were faster than my usual race pace and I was a bit worried that I’d bitten off more than I could handle but gradually I started to feel comfortable with the pace.
RP and Kirsten had people cheering at them constantly – Kirsten because she was leading the women’s race and RP because he’s like a rock star at these events, everyone knows him.
From about 6 or 7km I noticed that RP’s Garmin kept buzzing about 20 seconds before we hit the km markers. I didn’t want to go any faster so I decided not to ask him what it meant, but I assumed we were off the pace. We hit the half way mark to a great cheer from the Nighty Striders’ cheer squad including PF and Matt. It was about this point that Kirsten grew tired of my conversation and decided to look for someone else to run with.
The second lap was tough, I worked really hard to stay on RP’s shoulder and gradually we started picking off runners in front. RP did a brilliant job at directing the 10.5km stragglers.  He’d yell to clear a path and I’d follow. I started to feel the fatigue in my legs from about 16km but RP was talking to me constantly.  He was telling me to keep concentrating, run the little rises hard and recover on the down slope.  Over the last couple of kms he did his best to lift me and get me under 80 minutes. I haven’t seen the splits yet but I reckon I lifted a bit, I just couldn’t quite make up what I’d lost.
Anyway RP kindly let me finish in front of him in a time of 1:20:13. I’m absolutely stoked with that time. It’s a 3min improvement on my pb and a massive 6min improvement on last year’s time. RP is a legend; not just for pacing me but for leading this running group, thanks mate.
Powered by