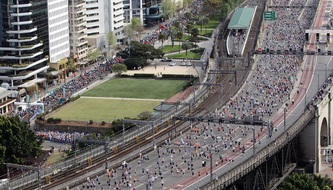 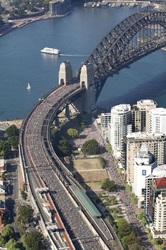 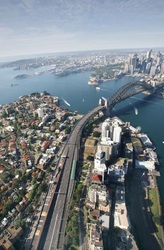 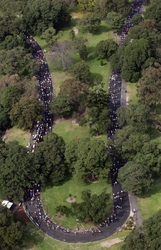 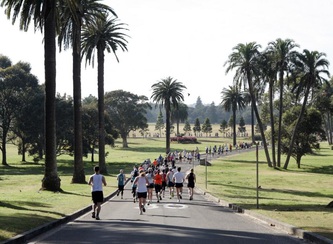 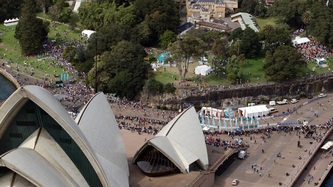 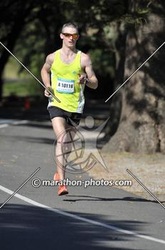 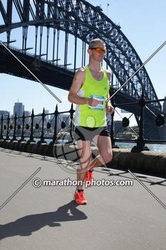 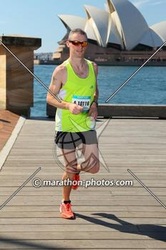 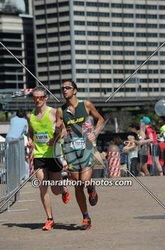 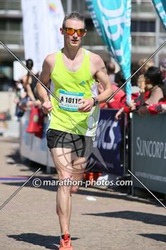 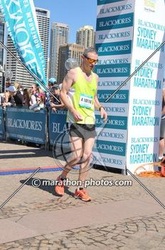 Race Date: September 16th    Results: 2012
My training goals for this winter were to simply run all the NSW State level events.
Leave the watch behind, forget about the pressures of time, speed, racing etc, just concentrate on moving well, on excellent posture, on making contact with the earth and applying force. Enjoy some long runs from Merewether with the 6am group, even some good grass training at Alder Park and plenty of off-road, natural surface training in Glenrock, especially Thursday mornings.
The final event in the NSW Athletics Winter series was the marathon, with the 2012 Championships incorporated into the Blackmores Sydney Running Festival.
I hadn't run under 2hrs 50 in competition, so didn't qualify for an Elite start. However, toeing the line on the sunny Sunday morning, one of the officials from ANSW saw me in the Fast Start group, and yelled out "Simon, what are you doing in there? You're an Elite starter!"
Everyone turned to look at me, so I had no choice but to jump out and go up to the Elite start.
So I'm standing there with 6 skinny Japanese runners, 4 VERY fast looking Kenyans, and a fistful of Anglo-Saxon ANSW runners, looking around and thinking to myself "Should I actually be here?" I know Lee Troop personally, 3 x time Olympian, so I'm having a chat with him about his form and training, when we get moved up to the start line, and I find myself standing between Lee Troop and Tony Abbott, Leader of the Opposition. All just a little surreal.
Usually, at 2 minutes to gun, I would reach and tighten all my shoelaces, but I was so interested with where I was, that I forgot to do it......
And the gun goes off and you're racing across the Harbour Bridge, and into the streets of Sydney. The goal for the day was to run no more than 4'00 min pace, hit about 84 mins at the Half, for a 2'48 finish. However, I was feeling good, the sun was shining, and the crowd was loud.
Having not used my watch for months, I wasn't checking it regularly. It was only at the halfway mark, through Centennial Park, when the timekeepers announced "You're in 22nd place", that I looked at the watch. 81 mins.… 3 minutes ahead at halfway - perhaps a touch ambitious....
About 3k later, about the 24k mark, my left foot started to get hot - that's right, I remembered, I hadn't tightened my laces. I looked over my shoulder - 23rd was to close, and in terms of ANSW Athlete's I was actually coming second. I elected to run through the discomfort, rather than take the 45 seconds to stop and re-do laces, and risk losing championship points.
At 25k, I knew I was in trouble. I was starting to change my strike and stride so that I wasn't making the developing blister any worse, and my pace was starting to suffer. At 34k, I was so uncomfortable, I knew there was no choice, that it was time to stop, that tightening the laces wasn't going to make it any better, but it may prevent it from getting any worse. The end result is a blister the size of a 50 cent piece on the sole of my foot.
I stopped, did the laces, but with the adrenaline and blood-pumping, I couldn't do it smoothly and it took what seemed like ages. And when I went to get moving again, it was all over. I couldn't lift my legs, stride long, breathe well, or even hold my posture properly. I hit the wall. Big time.
I slipped from 22nd place down to 96th at the finish line. Brad Dagwell of Newy came past me, as did many others. That's a tough thing to swallow, but I didn't give up. Seeing Troopy bounding through the 40k mark for a creditable 5th place outright was inspirational, and I did pick it up a bit, but only a little....
Knowing that Scott Westcott and David Bradney had both performed so well in their Half Marathon and 9k Events, I wanted so badly to be able to perform as good as I could to represent Newcastle, but I limped across the line in my slowest Marathon time of 3hr 05 minutes. And while I was sitting there, contemplating whether the day was a moderate success or partial fail, a friendly face reached across and patted me on the shoulder.
None other than Rob Higley himself, fresh off the plane from France, with an encouraging smile, and a kind word.
And yes, we did discuss "As a 3,000m Steeplechaser, what did I think I was going to achieve, running a marathon?".
The Final Stat's?
Not a total loss - I did finish 5th in term's of ANSW 2012 Championship, so picked up valuable points that has taken me up to no less than 12th place in the NSW Distance Runner of the Year.
Clearly, I could use a few more Sunday mornings at Merewether before the next one.....
Powered by