Race Date: October 16th    Results: 2016
Taper was all going according to plan until the Thursday 10 days prior, when I felt a little tightness during the speed session in my left hamstring. I took the day off on Friday, then showed up to parkrun at Mt Penang on Saturday. I felt the tightness again during the run, and immediately afterwards some sharp pain. Feeling quite worried about getting an injury only one week before the race, I found a sports physio who was open on Saturday afternoon. He confirmed that I had suffered a grade one tear, and went to work on me for about an hour. I skipped my planned long run on the Sunday, rested Monday, and tried the legs out on the Tuesday with an easy 6km, careful not to extend the hamstring. The tightness was there, but bearable. I saw the physio again on the Tuesday and Thursday, and he felt I would be fine to race on Sunday. That week I only managed a slow 6km on the Tuesday, a slow 10km on the Wednesday, then a slowish parkrun on the Saturday, the day prior to the race. The hammy felt fine, so I was confident for race day.
My nutrition plan for marathons now consists of me carrying (whilst running) a small bottle with a wide top that I fill with Tailwind (powder and water). One hour before racing I drink an Up and Go Energizer, then I sip on the Tailwind. Under my hat I place three small plastic bags of Tailwind. During the race, when my bottle is running low, as I’m heading into a drinks station I remove the top off the bottle, empty the contents, reach up behind my hat to grab a sachet, rip the top off with my teeth and empty the contents into the bottle. At the drinks station I empty three or four cups of water into the bottle (very quickly), then continue. I was more prepared for this scenario than at Canberra, and had rehearsed it in my mind many times, so was able to do this without losing any time to the groups I was running with. Just for the record, I also take two voltaren tablets for pain management, and an immodium tablet to try and prevent unexpected toilet stops. I’m used to losing toenails in marathons now – you just accept it. The only question is how many!
Arriving at the start line I caught up with Chris Hayes and Jess Stabler, Chris Truscott and briefly saw Matt Hutton and Alex Rogers. Reggie was there and was visibly distressed. I couldn’t do anything for her other than offer some encouragement. I did a slow warmup jog on the grass for 1km. I couldn’t see Simon Redhead anywhere, no tall bald near naked blokes in sight. I identified the 2:50 pace group guy, and figured I would run comfortably to feel, find a group to hide from the wind in, and keep tabs on where the 2:50 group was during the race. The intent to run with Reggie and Simon was not going to happen, so I just ran my own race.
The temperature was getting warmer, and the wind was drying sweat fast, so I became more and more conscious of hydration, slowing just enough at each drink station to grab extra water to drink, and douse myself front and back in an effort to keep cool. I noticed Matt on a couple of occasions at turn points looked like he was slowing considerably and really suffering, and I gradually lost sight of the 2:50 group. All my focus now was to finish well, hold pace as best as I could in the wind and get under 3:00.finish.
To my surprise I manged to hold on OK, and enjoyed the lap around the MCG, finishing in 2:55:21 (official) – my second fastest marathon. The good old ‘wobbly leg’ took over as soon as I crossed the finish line and I tottered out of control to my right. I was taken into the medics tent, but only needed a seat for a while. I left the tent and laid on the grass, managing a couple of painful cramps in my legs. I enjoyed the atmosphere for awhile, and caught up with friends. I found out that I had finished less than two minutes behind Simon, and only one minute behind Matt – who had taken the gamble and gone out hard, but wasn’t able to bring it home. Reggie crossed the finish line just over 3:00 and collapsed – it didn’t look good and she needed some urgent medical assistance. Gutsy lady. It had been a tough day – with runners I admire such as Chris Truscott and Alex Rogers only managing to come in a few minutes before me, it was obvious everyone had found the going tough.
Melbourne Marathon is a great race, well organised and a great experience all round – highly recommended. Next time I might try and stay there a bit longer! 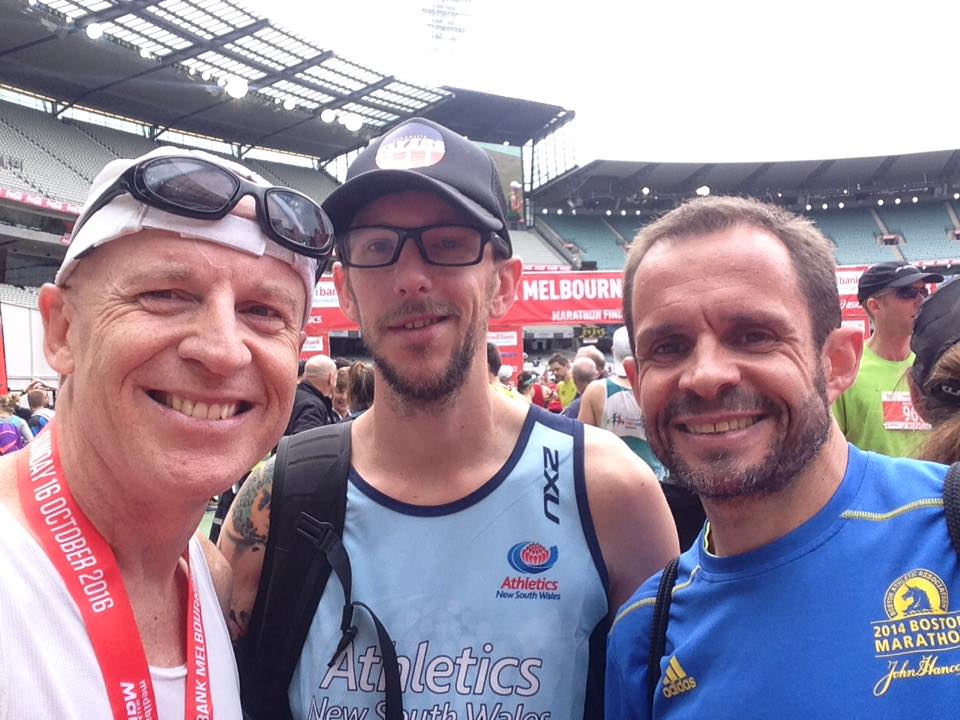 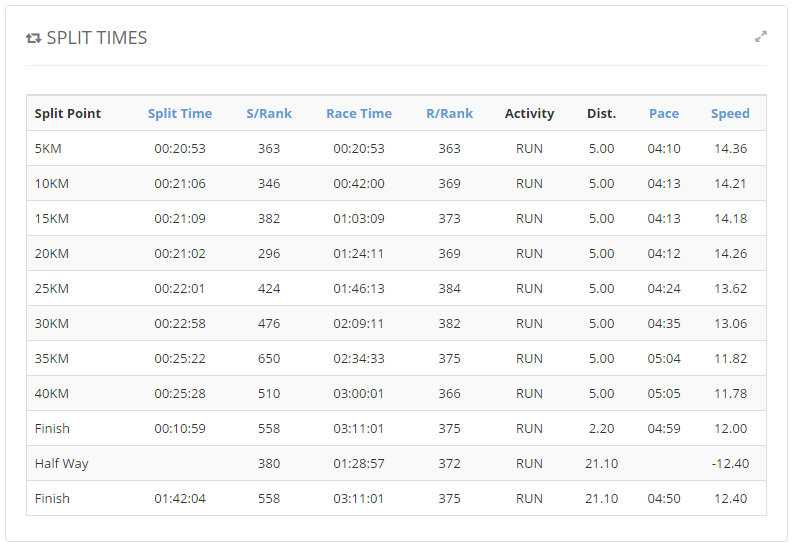