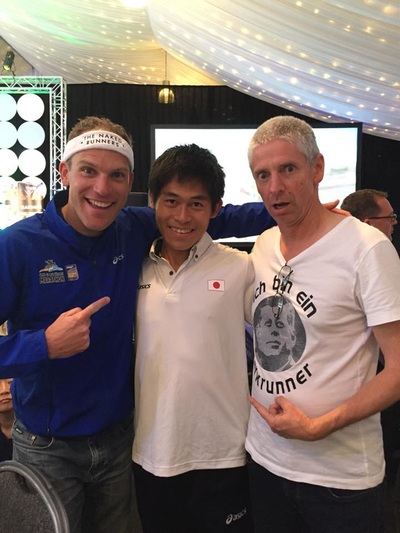 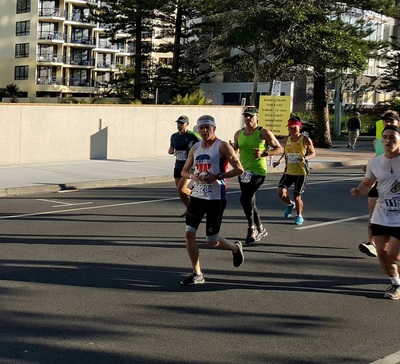 The goal was to go through half-way in 1:40 (4:45 min/kms), negative split and finish comfortably in sub 3:20.  While I entering off a low volume / low intensity preparation everything had been going extremely well. The left Achilles-calf issues of a few weeks earlier seemed to have been resolved and I was coming off a very comfortable and easy 1:33 in the SMH in May – where I didn’t think I would even make it to the start line a few days earlier. A couple of long runs on the Fernleigh Track were promising.
This race was never intended as an end in itself but an important stepping stone to towards my ultimate goal of setting a “boutique” world record of the longest gap between sub-3hour marathons – my one and only was way back in March 1980 when I was 18 (were you even born then?)  Since my transition to minimalism, Melbourne ’13 was a very comfortable 3:27 and Canberra ’14 a tough 3:25 on a very hard course.  At 53 the window of opportunity is diminishing – my analysis of marathon results shows that there is a massive drop off of sub3s after age 55.  So a flat course was quite attractive - my only reservation was the Queensland heat and the relatively late start of the race (7:20am) – but to that end I’d been doing three sessions of hot yoga a week to acclimatization and was also interested to see how my year of yoga would benefit my performance.

The first half went totally to plan. I looked at my Garmin far more often than I normally do and I had to be super disciplined to slow down to 4:45s when kept dipping under 4:40s and felt so good. But I was determined to not make the same mistake I done in Canberra (too fast too soon). The race organization and vibe was sensational and the on-course support from fellow Novocastrians in the race or supporting was fantastic. I loved the bands along the course and felt inspired when the lead pack passed only a couple of metres across from me – the energy and power in that group of eight or so was amazing. A quick look at my watch showed that I needed to slow down – a lot!  In my mind I’d broken the course down to a Fernleigh out (15km), a Fernleigh Back – without the hills, 7k north and a parkrun home.
I quickly got into rhythm and pace and with discipline was able to keep on schedule with splits for the first half all between 4:38-4:51 with my 5km splits even more consistent and it felt so good.  After sending Bridey Delaney a congratulatory text for her 3rd place in the 10k the previous day a plan was hatched for her and fiancé Ben Toomey to run with me for a while. They jumped in at around 19k and stayed with me till about 30k. This was greatly appreciated – I was still clearly in charge of the pace – but it was nice to have additional support and encouragement and to bring a certain level of normality (as we’ve down some runs together in Newcastle) to an event where it is easy to get carried away.  Having done a fair bit of pacing for others in recent times – it was nice to be on the receiving end. Bridey really enjoyed the very relaxed pace of her first marathon experience and was heard to say she could see herself getting into it. So when she wins Gold for Australian in three years times at the Commonwealth Games on the Gold Coast – I will feel I played a small part!  Was also so great to see lots of Region of Runner’s runners going by either way with lots of call outs – both ways – for support. And I can proudly say the Flyers kit certainly holds up well in an  IAAF Gold Label event – though most photos show me also wearing a Naked Runners headband doing a Woot.
Another part of the discipline was to stop at nearly every drink station and to have a short walk and a drink.  I was amazed how quickly I got back onto pace and caught up with the people who’d run right through. I may not have that luxury as my pace quickens in future events.
We went through the half way mark 15 seconds to the good of the goal time – so everything was unfolding well – though I noticed my hip-flexors a tad more fatigued than I would have liked. Without going crazy I was able to take the brakes off and open up a bit – dropping my average pace for each of the next 5kms to 4:36s and 4:29s.  I threw my empty gel flask away knowing that gels were provided at 30k.  Mel Roberts asked me at 25k how I was feeling and I yelled back “fantastic” and meant it. At 26k I started feeling “off” for no apparent reason and even a little bit emotional. With 13 marathons under my belt (11 of them in the last 12 years) I’ve learnt that in any long event there are ups and downs – and to a certain degree it’s a matter of riding the tough ones out.  1km later, thankfully, all was good again and I hadn’t lost any time.  At this and other difficut times I focused on form and posture – just like Rob Higley has shown me.
Everything was going so well and I was looking forward to maintaining pace if not accelerating over the remaining 12-13km.

Just before the bridge that takes you from Main Beach across to Southport and the start/finish area I started to become aware that all was not well with my legs – hammies in particular – there were some ominous early warning signs.  Cramps have been my nemesis in so many of my marathons – but I’d felt and hoped I’d overcome that issue.  Getting over the bridge and at about the same time as my running buddies left me – I knew it was going to be a matter of changing my strategy and managing myself home.  With these things on my mind I inexplicably forgot totally about grabbing a couple of gels at 30k. My hammies then suddenly said “no” and I had to stop for a walk and a stretch.  Its is certainly an interesting experience to be bent over doing a rag doll-yoga stretch watching the rest of the field run towards you – upside-down!! With cramps of this nature and at this stage of the race to me its not mind-over-matter – if your legs say “no” you have to nurse them home – so it was several more frustrating walks and rag-dolls. Again I was surprised that after a stretch I was able return to a reasonable pace almost immediately – though lost 30 seconds or more for each stop.  Nevertheless my pace deteriorated with 30-35k being 4:57s and 35-40k 5:14s.
The ups and downs were again illustrated when having just gone past the finish shute (unfortunately on the other side of the road – still 10k to go!!) that Jason Gill ran past at a reasonable clip as I was walking and said “Come on Doddy”. I got back into stride and it was only a couple of hundred metres further along that he’d suddenly fallen in a hole and I went past him – it was an even tougher and longer trip home for him from then on.  It’s true – something (detrimental) happens to your body at 32k!!
And something else at 32k – I remembered that I’d forgotten to pick up gels at 30k!!  Without the shade protection of the tall buildings and sea-breeze and the crowd support in the top-end - it’s a hard slog when you are falling apart.  There was still some chance of a sub 3:20 but these hopes were fading.  The final turnaround point came – only a parkrun to go – but it was running with the occasional walk-stretch stop. Jody Whitehead went by strongly with only a couple of k to go and went on to record a sub 3:20 in his debut marathon.  That’s what I was meant to be doing!
I sort of held things together with 5:11s for the last two k. The planned comfortable sub 3:20 sadly gave way to a tough 3:22:32 and the negative split to a 3 minute positive splat – only two and a half minutes down on goal time but far from the manner in which I wanted to do it. So rather than a big step forward to my bigger goal there was an incremental improvement on an easy course. 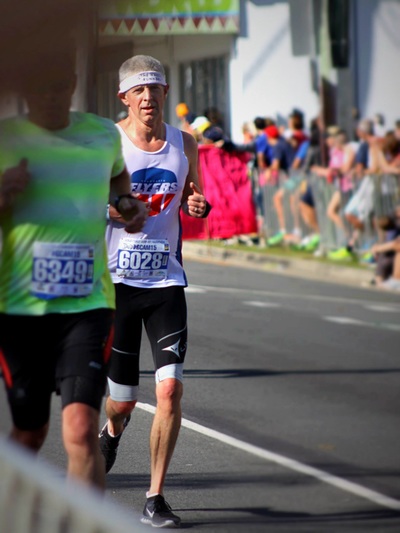 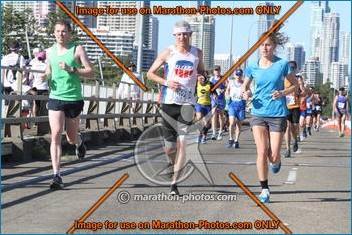 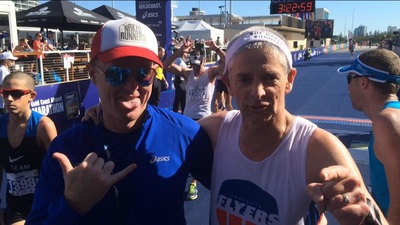 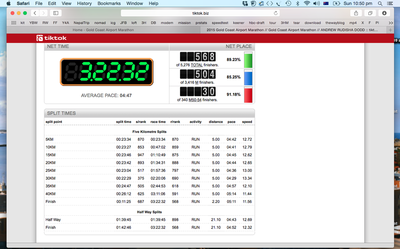 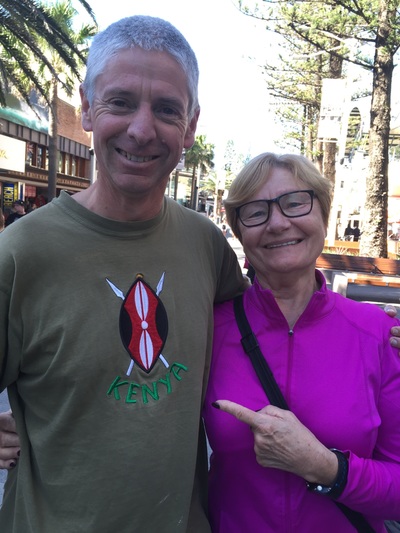 Somewhat disappointed – but it was a great 4 days for me as I immersed myself in the atmosphere of a great event – wandering arou'After' shot with Antoinettend the expo, jogging the Main Beach parkrun course with a couple of hundred others (that’s where it all started in Australia) going to the Legend’s Lunch and lots of meals, coffees and drinks with fellow RoR folk.  How good to have a post event dinner at an interstate event with well over 50 Novocastrians as we traded war stories.   A cold water recovery in the hotel pool with Simon “Boxhead” Redhead and Scott White (debut half) on Sunday arvo and a swim and 300m jog (just because I could!) the next day was helpful. Despite the cramps there was no hammy soreness the next day – just slight muscle soreness in the quads for about 3 days. Calves and achiles fine.
So many runners – and spectators have commented on how hot it was. After the half last year I thought it was hot watching the marathon and word this year is that it was hotter again.  However, at no stage did I feel hot (photos show I looked hot!) or feel that had a detrimental effect on me. But now I’m not so sure. It would be a handy scape goat!
While I’m not totally sure how to resolve the cramping issues – one good thing is that I do know where several minutes can come from.  The goal is still there – but sub3 – sure looks a bit unrealistic.
I just re-read my Canberra 2014 report and the plan was exactly the same as for GC – so I was happy with my discipline early on and how I responded when things started to fall apart. Still learning!
Perhaps my favourite moments were meeting Antoinette and her partner David at The Legend’s Lunch on Table 7 with Mossy and Robbo on Saturday.  I ran my first marathon at 16 – and she was quite new to running (started at St Peter’s parkrun in Sydney) and debuting at 65!! In the ‘afteryard’ I hardly saw anyone I knew (too slow for the other Flyers!) but I did bump into David and he said she’d be out there for a quite a while yet.  After a late Wooters breakfast on Monday I got out of the taxi at Surfers and walked down Cavill Avenue – and who should I see – Antoinette!! She had run (yes she ran most of the way) a very even paced 5:48 and was delighted. She’s a legend in my books!
P.S. enjoyed staying with the Redheads & the Whites at Main Beach and Craig Simpson and Suku Thambar at Surfers the night before.
Powered by