Race Date: May 12th    Results: 2018
I’m writing this report 2 days after the SwimRun event, and I’m still physically shattered and sore. How did this race cause so much discomfort?
BACKGROUND:
​
This story commences in late 2017 when Paul Fenton (PF) had heard about SwimRun and was pitching to Richard Palmer (RP) to be his race partner after a FLyeRS run.
Regina Wright overheard PF’s conversation and thought it would be a great event, and RP suggested that she partner with me. So when she came over to my seat I literally had no idea what I was signing up for – but she insisted it would be “fun”. (In hindsight, what escaped me at that time was the fact that Reggie’s idea of “fun” differs somewhat from the general population – she enjoys completing a very tough course, or finishing on the podium, or preferably a combination of both.)
THE PREPARATION:
​
To begin with, we needed to identify what on earth to wear. A stopwatch and swimming pool soon highlighted just how much drag standard running shoes added, so various options were tried until I settled on an old pair of Nike Luna Racers which are made of plastic, low profile tongue, and very light. In Europe, many competitors use pull buoys, but swimming core-shorts seemed to offer the same buoyancy with no drag and were ok for running. And most importantly, the extra mid-body buoyancy made swimming with shoes far more efficient. To finish off the race gear, I ordered a proper SwimRun wetsuit (with built-in prerequisite whistle) because race conditions in May might be very cool. (Interestingly PF and RP bought their SwimRun wetsuits locally in late 2017 without a problem, but by April 2018 I found all SwimRun wetsuits were sold out in Australia, N.Z., and the Netherlands. As a sign of a booming sport – the only country with available stock was England!)
Next step was the training. I generally swim more often when I’m injured – so my chronic patellar tendinopathy has meant many hours in the pool over the last few years. But a protracted post-holiday virus in Feb/Mar meant no substantial running until April – leaving only 6 weeks until the race – so it was going to be tight. Meanwhile, my partner Reggie was in training for Coolangatta Gold (surf lifesaving’s premier event) – so she was in great shape.
As a confidence booster RP, PF, Reggie, and I tried a couple of trial events at Horseshoe Beach and Merewether baths – but this had quite the opposite effect, as we all quickly realised that one of the hardest aspects of the event was all the transitions in and out of the water. The large number of transitions meant it was really hard to get any sort of rhythm and keep your heartrate under control – as a comparison triathlon has only 2 transitions swim-bike and bike-run; whereas our SwimRun race in Sydney has a staggering 26 transitions!
Training through April was ok, but (on reflection) an average of only 50kms/week of running was nowhere near enough. To try and gauge our general fitness and stamina levels going into the event, we decided to run Sydney:10 to sharpen up a week before our race. Conditions were perfect and we all ran better than expected, especially Reggie who was only seconds off her lifetime PB – but ran totally relaxed. Whereas, I was about a minute slower than where I’d hoped to be. 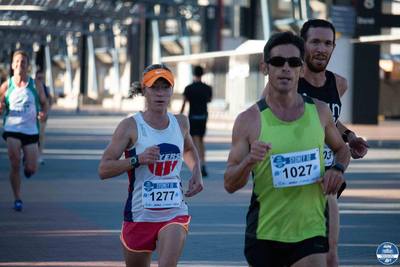 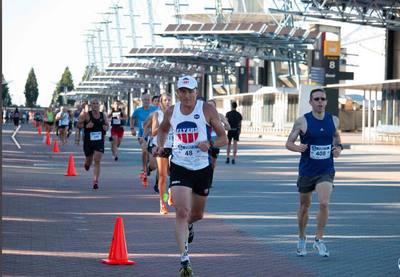 Based on all the build-up training results above, I’d estimate my fitness ‘scorecard’ before the SwimRun race was:Not ideal, but should be sufficient to finish respectably – and (as mentioned) we were simply there to have fun, weren’t we?
After the gun, it is 650m across Rose Bay beach, then a 550m swim to the Hermitage Reserve. The swim is horrendous as the water is very choppy and we were already swimming through back-markers from the men’s wave. Out of the water, I’m quite dizzy from the swim and very unsteady on uneven rocks. Reggie and I scramble up to the walking path and surprisingly we’re only 10 meters behind Moya & Mitchell. They also seemed surprised to see us there, but push on at a strong pace in an attempt to drop us. We run to Hermit Bay for a 220m swim, then run to Shark Beach for a 230m swim – around the outside of the shark net(!), then run to Parsley Bay beach for a 150m swim – during this time both teams are surging to try and gain a gap, but each time it’s covered by them or us - much to their astonishment. The transitions into the water are a particularly good place to recover a few meters.
Running along The Crescent in Vaucluse, both teams take a wrong turn at Wharf Rd and then we bump into RP and PF at the end of the cul-de-sac as they also made the same slip-up. A quick return back up the hill for everyone, means we only lose 90 sec – but it’s an extra climb I didn’t really need. (Note: A number of the climbs from the beach to the running route are brutal – I like climbing, but not when your heartrate is already in the 90%+ anaerobic zone at the bottom of the hill!) 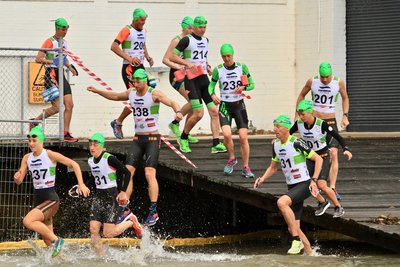 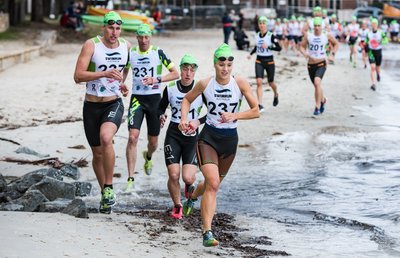 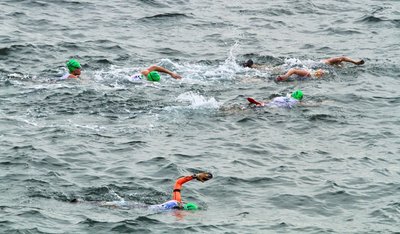 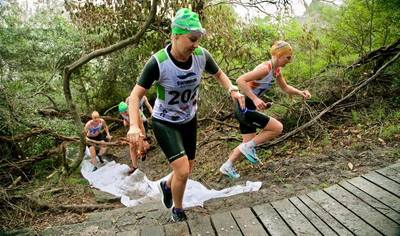 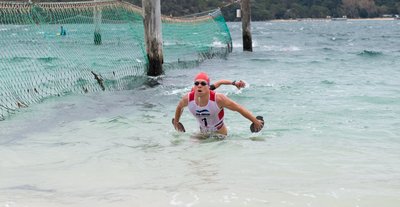 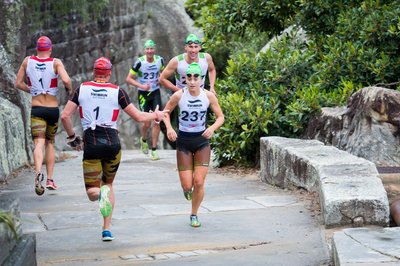 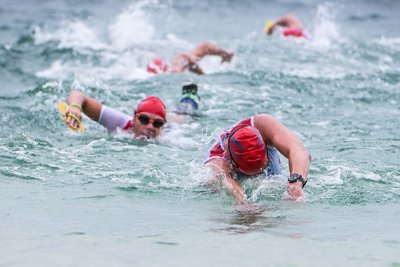 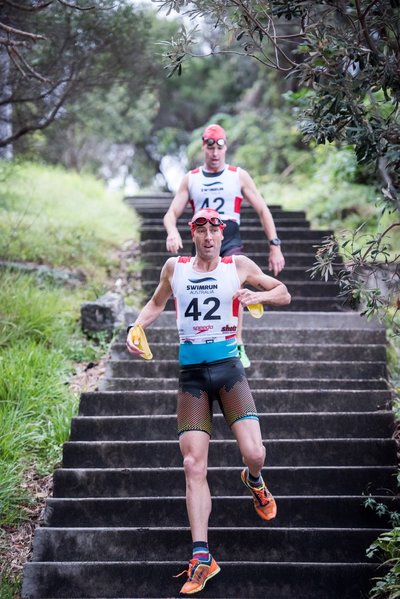 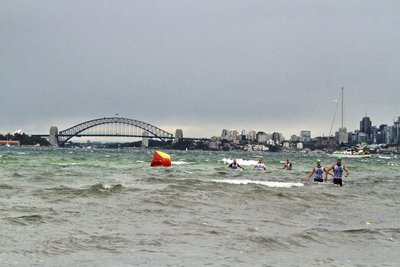 While the running and swimming pace is not extreme – it’s becoming clear to me that Reggie, Moya and Mitchell are all *very* fit, as there’s absolutely no respite on the hills, beach, water, or transitions. We push on to Gibson’s Beach (190m swim), and then Camp Cove (200m swim), before reaching the turnaround point at Hornby Lighthouse.
The next 2 swims back towards home are curious as Reggie swims on the feet of Mitchell (and they make some odd navigational choices), and Moya on my feet. By Parsley Bay I’m trying to swim and run as efficiently as possible in an attempt conserve energy, but by the time we reach the steep climb out of Shark Beach I’m in real trouble getting my breathing under control. The rubber band starts to stretch as my substandard endurance fitness become telling after 1h40mins, while concerned Reggie is just ahead yelling motivation sayings to me like “You can do it!” and “Dig deep!”. (I was digging, but the well was empty)
RESULTS:

The Flyers results were: (The tough conditions meant only 1 team broke 2 hours this year, which is unusual.)
​
All and all – an amazing experience and one I’ll remember forever. Entries for 2019 opens on October 1st – limited to 150 teams. 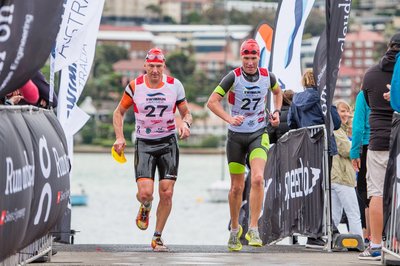 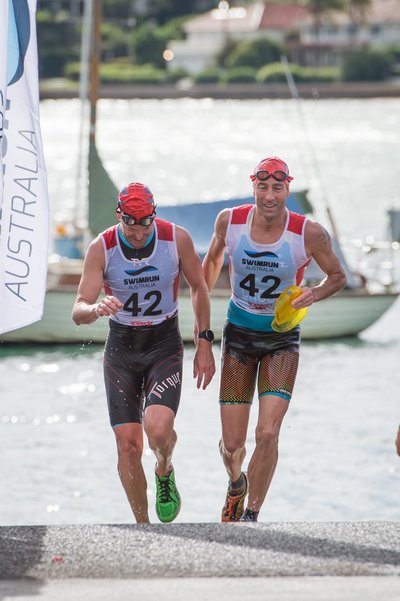 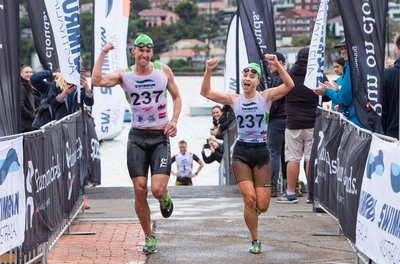 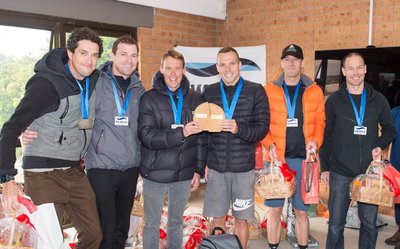 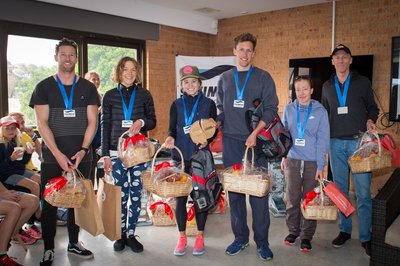 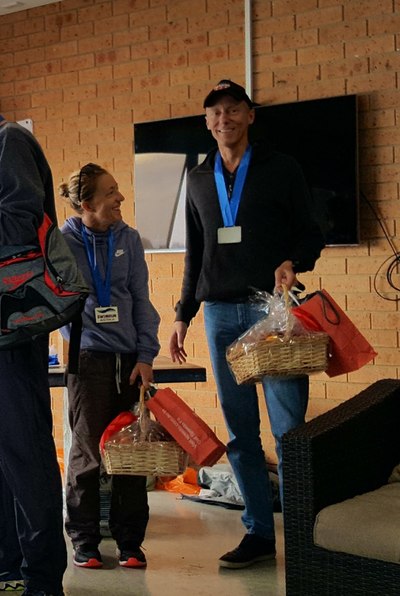