I wasn’t planning to run this one. After the May cancellation I deferred my 100km entry to 2023 and thought I was quite settled with this decision.

About 2 weeks before the race, on a run with Kelly and RP and we were talking about Kelly’s upcoming Queenstown marathon and RP had stories of lots of amazing adventures in NZ, and that’s when I first started to feel a bit restless, and that familiar craving for an adventure!

There were some other chats with other Flyers headed for the mountains for the weekend, and finally the FOMO won, and I quickly found myself paying full Ironman price for a late rego transfer 😊

The very next day after this transaction, we were all notified of the course alterations, and it was now going to be substantially less elevation and 50% on road. In message groups it was re-branded to URA (Ultra Road Australia). Secretly I was very happy about this! Very limited training in the trails this year and coming off some big road races, this would suit well, and in addition a favourable weather forecast, after weeks of rain, the weekend looked promising!
I arrived just after 10pm at the YHA in Katoomba which I think this was my 5th time staying there. It’s a beautiful heritage- listed building right in the middle of town, it is basic, but super convenient and clean and I spent a lot of time travelling in my 20’s so I think I kind of like the memories of that! It’s also only other runners that stay there on UTA and 6 ft weeks so it’s fun to chat with people in the kitchen in the morning while prepping fuel etc.
​
Slept ok, with the usual paranoia to check that the alarm was set a couple of times. After waking, and while getting ready I did have a panic. I couldn’t find my whistle-part of the mandatory gear! I messaged people in a fluster. Luckily a guy overheard me freaking out and showed me that there is one attached to the pack! It is so tiny it looks like a bit of plastic to hold the zipper. It makes a pathetic little ‘cheep’ when you blow it. I am so thankful to find it’s there, but I do hope my safety doesn’t depend on this!

There were a few short hard stair sections, but nothing nearly as bad as Furber steps from 2019. Very close to the end, I did a classic netball style pivot, (I’ve never played netball!) at the last minute seeing the pink marker to my left and rolled over my right ankle. Felt that acute pain and a wave of shock. Initially I thought, can’t believe I will have to pull out here so close to the end!

The volunteer was encouraging, he said Keep going, it’s only 1.5km! So, as I’m able to still weight bear, I figured it’s not broken and kept up the pace as much as I could.
​
I was really surprised to see the finish line up ahead, as we were only at 17.5km, then I started to think we were going to have to go back up that initial hill from the start! But thankfully, not, it was into the finish straight, and a great feeling to get to that finish tape. 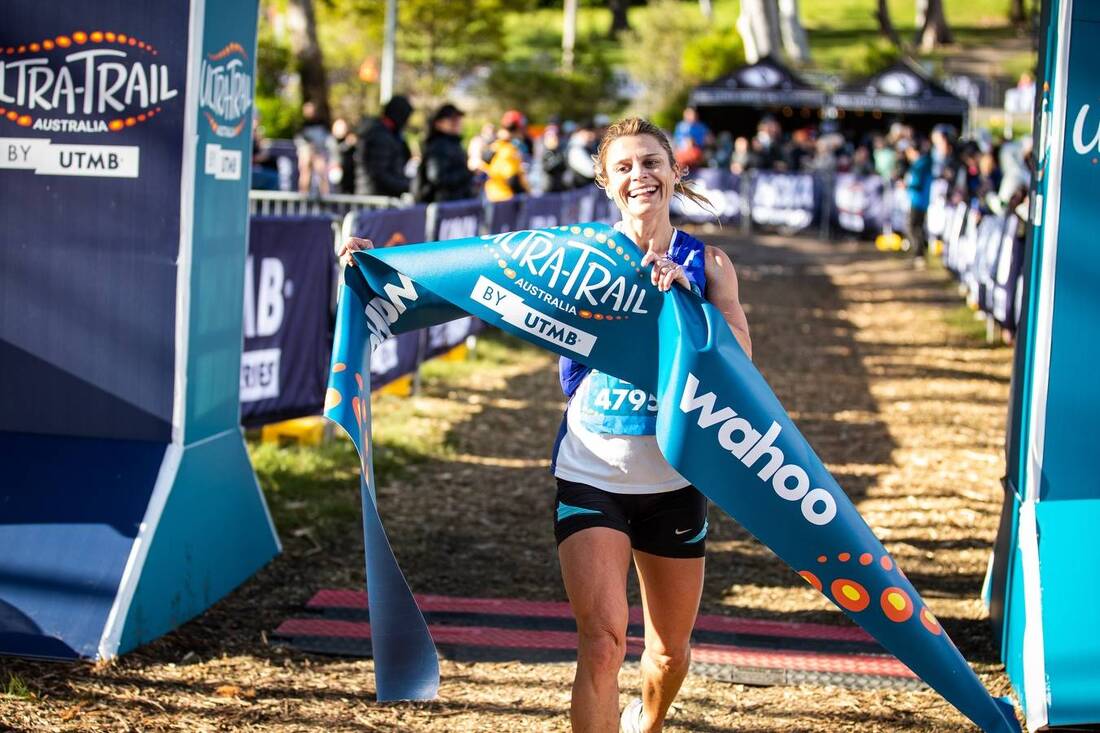 So, fun hanging out in Katoomba with Flyers afterwards we had a good feed at a Nepali restaurant, it turned out to be an interesting weekend food wise.

​Biggest thanks to everyone who came to the presentation in the afternoon. I felt very supported and so stoked to be there. I received a beautiful hand painted trophy and a toy cockatoo 😊

In these post- COVID and mid- La Nina times, I am so grateful for any racing opportunity. I have had some feelings of slight disappointment that it wasn’t the ‘true’ course or full distance, but in the end, still a great experience, and another stepping stone to some bigger goals for 2023
​
Congratulations to everyone that was there, lots of great results over the weekend!
The next day I received a message from my friend:

“Champagne and fried bread, carb loading for champions”!
Powered by