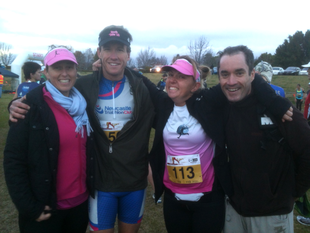 For three consecutive years, I raced the 10km event at the Winery Running Festival. My old boss got me into it in 2009. At that time, I was quite a bit “heavier” than I am now and did a time of 55:13, giving me about 176th position.

Then, as my fitness grew and kilos were shed and I had been training with the Newcastle Flyers crew (under the guidance of RP), in 2011, I completed the same course in 38:57 and won my age group (30-39’s). So, as you can see, massive improvement is possible. It didn’t come easy though… You’ve got to have commitment and be prepared to put in the hard work!
Following Ironman Australia up at Port Macquarie this year, I had a bad run of re-current colds which limited my autumn and winter training routine. As such, I was not sure which event (if any) to enter at the Winery Running Festival. A couple of weeks before the race, I decided to enter the marathon, which was my first pure marathon (i.e. without a 3.8km swim and 180km bike ride before it ;)
I had a glance at the previous year’s results for this event and knew that I could be up in the top few if I had a good day…
It was a 7am race start and on the morning of the event (Sunday 22nd July 2012), the weather was less than favourable. Cold southerly winds and spitting sideways rain were certainly in the air!
Without too much of a plan, I took a good position at the start line and made my way clear of the other runners before leaving the race compound area. I knew I needed to conserve heart beats early, so I decided just to take it as easy as possible and stay with the leading bunch.
Before too long, Tony Anderson (last year’s 2nd place getter) and I had opened up a considerable gap on the rest of the field. He was powering up the hills (including the infamous Audrey Wilkinson hill – very steep) and I was taking advantage of gravity to catch him on the downhill sections. I made a conscious decision not to burn too much energy on those hills!
Tony and I stayed together until around the 10km mark. We were chatting about our recent races and I remember Tony asking how I went at Ironman. I told him my result and his only comment was “well, looks like he’d be settling for 2nd place again this year”!
After that, I was feeling good and decided to push a little harder. I recall my pace being around 3:50-4:00 per km along some of those long flat stretches.
On my return from the turnaround point, I started encountering fellow marathon competitors and then the masses who were running in the half marathon event that started 30mins after our race. Obviously, the preceding motor bike gave me away as the marathon leader and the cheers and encouragement from the other passing competitors was one of the most inspiring things I’ve experienced. It was awesome!
By the time I reached the race compound and the half-way point, my Timex GPS was reading an average pace of 4:13 per km. Considering the hills and undulations on the course, I was stoked with that and had opened up about a 1 minute lead on Tony Anderson. However, he made some ground on me as I chose to stop for my special needs, including salt tablets and a can of Mother! I don’t think he stopped at all.
Away we ran once more for lap 2. The second time negotiating Audrey’s hill was definitely tougher than the first! It was a good opportunity to check out the lead I had on the other runners, as there was a small loop turn around at the top of the hill. I determined that I was leading by about 90 seconds, but a couple of the other runners had made ground on Tony, so I knew they were stepping up the pace a little.
They always told me that something happens at the 30km mark in a marathon. Well, it’s true! My legs were starting to feel heavier and the race was starting to hurt. I truly believe that one of the key skills you get from speed work running training is getting used to hurting whilst you’re running fast! This skill was coming in handy at this point.
At the 34km turn around point, I made a much needed visit to the portaloo and despite losing about a minute or so, I determined I was still about 90 secs ahead of those other runners. I was surprised to see that Tony had been overtaken by a couple of others.
On the return, there was a long incline section that really started to take its toll. I remember looking at my watch and thinking “come on mate, you can go faster than that!” I just tried to convince myself that the others would be hurting too, so just keep on going and the lead that I had built should keep me far enough ahead! Despite looking over my shoulder, it was really hard to tell where they were, since the course was filled with half marathon runners as well.
On the final few kilometres, RP and some of the other 10km event leaders wizzed past me. It was great to see those guys and it gave me the final bit of encouragement to get home strong.
The finish chute was a great feeling and it was a bit unbelievable to have won a marathon! I’m glad I decided to enter the event after all!
My Timex gave me a final reading of a 4:22 per km pace average for the 42.2km.
A big thanks goes to my support crew Michael Beatty (who got me to the race venue and handled my race gear) and family Sasha and Noah who cheered me on during the race…
Also, thanks to RP (aka “coach”) for his continued mentoring and friendship!
Powered by