Race Date: March 7th  Results: 2021
Training
​I learnt last year that plans work. During COVID I trained for what turned out to be a virtual event, the Western Sydney Half Marathon. I brought my time down by around 6:30 minutes. So, in December when I decided to train for the Port Mac Half, I chose a Garmin Coach plan that comes with most Garmin watches and used Greg McMillan. To be fair for those who have a PB under 90 minutes, these plans would not work as they have time goals no lower than 92 minutes.

Training in summer this year was not a great experience. As we all know, there were many mornings where the humidity and moisture in the air were unbearable. 11 mornings each fortnight I got out of bed and was running between 5 and 7am. The plan I had set for 4 days a week. I added to my load with interval and beach running sessions with Trevor Scott (who knew your high school maths teacher could be a brilliant tri and running coach!) and Sunday long runs across Light, White and some Blue trains. Some of the long runs were plan runs morphed into the Sunday long run. When parkrun started back up again, I dropped Trev’s sessions and focused on doing some tempo runs. This has led to a 10 PB course streak at parkrun of which all PB’s are > 1 minute than the previous best as I came out of COVID a better runner and came in to 2021 a better runner than 2020 already.

I struggled to hit the marks of most of my pace targeted runs in December but was slowly building confidence. Through January though as conditions worsened, I was struggling. I became frustrated and my anxiety heightened. I admit, I was in part responsible for asking that the pace and distance of the long runs be adhered too after a long run that was a bit quicker than should have been. It happens though and well-intentioned runs can become faster and longer than planned. I was at a juncture of my training where I felt I was going nowhere.
In February I built confidence and was starting to hit the mark, but I was dropping some optional runs that I would have done last year through a little bit of laziness or aiming for PB’s. I started to use Blue Track (thanks Lou) for my intervals and fast runs and unexpectedly broke my 5km by over 30 seconds. The week leading into Port, I broke my 10km record after doing a 10-minute WU (> 5 minute pace) and 8km @ 4:24 pace. I felt ready.
Pre-Race
So, I arrive in Port Mac lunchtime Saturday. As soon as I arrive, the atmosphere is buzzing. I start to see Flyers almost immediately. Trent Bonar’s non-twin son Odin is about to enter his race (which he wins). I can hear Dave Robbo MCing and then I turn the corner and John ‘On the beers’ Doyle, Kyle ‘Go Flyer’ Pinkerton and Chris Olsen (sorry, I got nothing) are out the front of either the pub, Baskin Robbins or the fish and chip shop (that’s not a multiple selection response though 😊).

​My memory is slightly hazy so I’m running with pub, others might have a different view and somewhere out there lies the truth. They all look quite relaxed as though they are on the beers though. I get an acknowledgement from JD (to be fair, is the only one that knows me as I was in the Flyers Relay team with him last year) and my wife and I are off to have lunch next door to those establishments.
During lunch, Trent arrives and talks to us from the footpath. He continues his relentless bullying since high school 😉 and criticises my lunch choice of a salmon dish and table water. Trent having returned from injury does the 10k the next day at a more relaxed pace than we know he can do.

​After lunch I pick up my race kit and head to the hotel. After I check-in I ran in to Lachie ‘The Kid’ Heuston and his partner. Seriously this kid looks like he stole his parent’s car (it’s quite an impressive vehicle) and came up to Port to impress his partner. I am still convinced he is the same age as my oldest boys, who are in senior high school. I’m even more convinced as I see his Combined High School bag with his gear in it and a bunch of stickers on his arms that the young kids and some older ones like to have these days (tatts?). Lachie gives me the low down on Doyle, Pinkerton (injured ☹) and Olsen about their events and he tells me he is doing the 10k. The fact he is doing the 10k and letting his bones develop still 😉 has me place him at about 16 or 17 (the very poorly constructed race results tell me otherwise). The next day he does impress his partner and his parents and comes 3rd in the 10k. Well done Lachie!
​After a restful night sleep, I wake up Sunday morning and run in to Cameron ‘The Flash’ Manning and his deadly crew as I am about to leave the hotel. Cameron’s doing the treble he tells me. Massive kudos to you mate for completing such a feat! I’m just happy to have done the half!
I drop my key off at the hotel desk but no one was there. After the half I found out that they checked me out of the hotel (nice) with my wife still in the room hahaha. Thankfully housekeeping had not come around and my wife had not left the room! I might have had to walk home!
I walk down to the race area and after a while Adam White, Rob Seville, Rob Collins (former Flyer) and Sarah Sparke (not a Flyer) join me. We chew the fat about expected race times as we await the race start. Close to 7am, JD comes through and wishes me luck as he heads to the start line for those doing pre 90 minutes.

​Dave Robbo states that the conditions were perfect for running and there were no excuses for not running a PB (anxiety ramps up a notch 😊). Those doing the treble (Jenn Davey, Jody Whitehead and Cameron) commence next and then those with an expected time between 1:30 – 1:45 commence a minute after that. The rest fall somewhere after we leave.
Race
I start out at a steady pace, I’m killing it. Around 4:30-35 pace for the first few kilometres. Mentally I had trained for and focused on 14-minute 3km sections (4:40 pace) as the training plan was for 1:40 but hoping to run a little quicker as I was expecting to fade late. Adam and I run pretty much together, with both of us taking the lead or running beside each other for the first half of the race. I see 5km tick over and I am < 23 minutes. It’s a bit quick but I feel good. Around the 2km mark, Rob and I high-five each other as we pass (hopefully no COVID officials read this). Around the 6km mark we pass Cameron and I offer encouragement. He says that he is just warming up!
I am almost the end of my 2nd lap; Adam has started to drift but I offer encouragement on the way through on the turn around. I complete the 2nd lap and the rails start to fall off slightly this caboose. My kilometre times are drifting closer to 5-minute kilometres as my watch starts to provide alerts.

I’m taking in my gel and water more frequently for the last lap. I stop to compose myself at the last drink stop and head home quicker. I take the turn towards the finish line knowing that I didn’t quite reach sub 1:40 (1:40:12 Strava, so I am taking it 😊) but still a PB by nigh on 4 minutes nonetheless.

My official time was 1:41:29. Cameron sprints past me at the finish line like a cheetah (although I realised afterwards, he started before me but still a brilliant time) and readies himself for the next 10km leg. 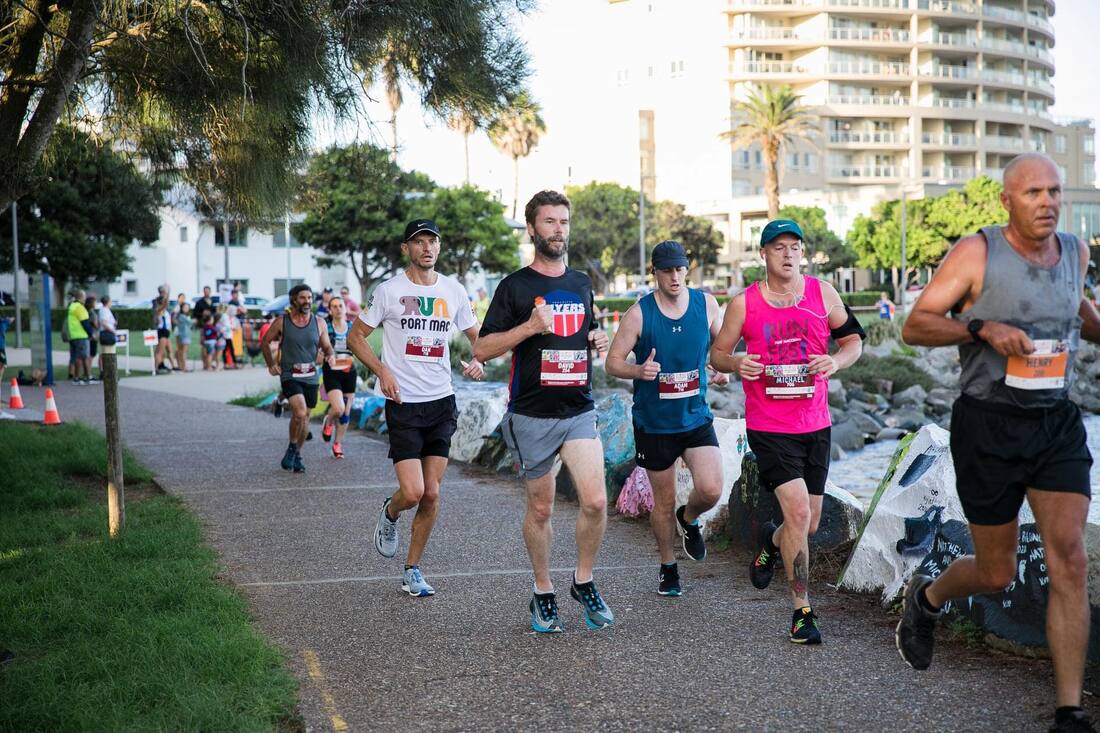 ​I go through and collect the medal and chat to Rob Collins and then join Stephan, Tamara and Rob Neville and we all celebrate our PB’s and get a photo together. So proud to be a Flyer today and so proud of all the Flyers with their runs. The drive to succeed and improve, the camaraderie and encouragement was awesome!
Powered by