It is difficult to know where to start the race report, because the marathon definitely does not begin on the day of the race. It begins a lot earlier. I have been speaking about trying a marathon for a few years now. But I never had the time / motivation / consistency / discipline to do it.

It was my 2018 resolution: Being back to running in competition and running a marathon in less than 3h10m.

I think in January I went to two long runs on Sundays with the Flyers. It was very hard to wake up at 5am on a Sunday morning to run 21km at 6am… At this stage my fitness also meant that I would struggle to stay awake the whole day after that. I tried to begin training seriously with Marnie but constant back problems made me stop training more than once.

​Advertising break: I went to Transition Chiropractic to visit James Straciwa. This helped a lot. Before visiting him, my back was blocking every two times I was running. After visiting him, I did a full comeback to fitness and marathon preparation with only blocking my back twice.

Still the marathon in mind and speaking about it with Marnie but not really training for it. Kind of aiming for Melbourne in October and it is still very far away. The weather is too hot for me. We usually meet for 6km jogging and are proud of ourselves when we get to 10 or 12km. :-)

This is when Marnie watched the commonwealth marathon. Seeing the Scottish leader collapse and the Ozzie victory gave her a lot of motivation (and also made her realise that we should actually train for it).
My marathon preparation went very smoothly, I was now aiming for 3h15m. My back blocked mid-august after a 90km week and a 100km week. It was frustrating, but now I think it was probably for the best. I am not sure my body was ready to endure 5 or 6 weeks that hard.
Before Lake Macquarie half-marathon, I knew I was fit. One week before, I did a good red train (and more kms to get to 36km…) and I recovered well from it, which is a good sign. I went to run under 90 minutes hoping to be easily under. The 1h25 were a surprise, it is my PB. I did not think I was able to do my PB, and run 8 minutes better than at Bay-to-Bay (!).
​I did one last big training two weeks before the marathon (26km including 2x10km at marathon pace). I was now aiming for 3h10.

I did NOT enjoy this part:
Half of my brain was thinking logical. “You are fit. You have done a consistent training. You just did your half marathon PB. You can’t lose all you fitness in three weeks”. Half my brain was paranoid. “You did not train enough. Your small cold will ruin everything. You will cramp because of your calf.”
​
At this stage, speaking with Marnie and with my French friends running the Berlin marathon helped. It looks like most of people have a weird tapering time.

I spoke with some of the girls representing Tasmania who were like me very happy with the weather. I also spoke with the “French Maid”. He was running to beat the World record of marathon dressed as a French Maid. He had to do better than 3h26. He finally made the world record, as well as three other people in this race including a guy running the whole marathon in thongs with a surfboard.

Count down: 3 minutes, first energy gel, 2 minutes, 1 minute… I was not stressed anymore, mostly excited and checking if my watch was ready to go.

0 to 10 km: Finding the pace
Being in the elite/preferred start was amazing for the experience and all the things listed above. However, it was not great to help me find my pace. Everybody around was faster than me and I had to be very concentrated to keep my pace. Everybody was going passed me, but I was thinking to all the advises I received and tried to keep my own pace. Also, this part of the race is not flat at all, which was not helping me to find my pace. I was going at 3’50, then slowing down to 5’ according to my watch. I calculated that this is an average of 4’25, not too bad (aiming an average of 4’30 for 3h10), so I stopped looking at my watch every 200m. I was feeling good and easy enough to enjoy running on the bridge.
​
Time at 10km: 44’12
10km to 20km: Anxiety during the race
Around the 10th kilometre, my right calf began to be painful (fuc**** ceiling painting). It was early, too early. It did not slow me down, but it gave me a bit of stress and overthinking. I was still feeling quite easy, which is normal at this stage of the marathon, and my brain was still fresh enough to think. I was very frustrated because feeling fit, but afraid that my calf would not make it until the end. I was afraid of cramping.
I found a good group of guys who were going at my pace (4’15 to 4’20 most of the time). I was aware of being too fast compared to the 4’30 planned. But I was feeling easy and relaxed, except for my calf. At a moment I was asked what was my aim, I said 3h10 and the guy was aiming for the same thing (qualifying for Boston for him), so I felt ok with my pace.
20km to 30 km: Good times
I knew Sean was waiting for me at km 25. So I was thinking about what I was going to tell him. My choice went to “my calf is painful”; I think I needed to share. After Hyde Park, there were a lot more of spectators so I was afraid to miss him. He was actually into a small and calm street so I really had time to see him; it has been very helpful and helped me not to think about the race for a few kilometres. The 25th km was the second fastest of the whole race. I think I wanted to impress Sean who said no to a cruise on a boat with free booze in order to come and support me.
I reached the 27th km, (fifteen to go) and then it was all quite easy until the 30th km. I just remember running in front of the pasta/pizza place we ate at the day before.

It was 42’18 for this 10km
33km to 35km: did they lie to me?
At this stage, the race was supposed to be flat. But it was not. They did not say on the website that from the 33rd km, it was actually uphill until the end. I am sure it was ‘Publicité mensongère”/ false advertising.

Jordi, did you lie to me? Jordi, tu m’as menti? – this is a nice rhyme in both language.

I am now thinking about the Uber driver from yesterday who told us it was a tough course.

I am also thinking about Paul who said that he was surprised on how good you can feel at km 30 and how bad at km 35.

I was feeling a lot less comfortable and I was slowing down, but not that much.
35km to 40km: just keep going
All my body was painful. At least I was not feeling my calf anymore. I was beginning to feel part of my body that have never been painful before, like the upper part of my back. I knew I was in front of my 3h10 aim. I knew that I could slow down and still make it.

So I just kept running, at a slower but steady 4’40 / 4’45 pace. I was still passing people. I was making calculations into my head. How long is it going to be until the end? When I realised it was still half an hour to go, it became very difficult mentally too.

I was not at all looking the landscape around. I was just concentrated to keep running. One leg in front of the other to get to the end.
I was not too far behind the 3hours, so I think I was passing some runners who were aiming sub3, and were slowing down knowing they were not going to make it. Passing people rather than being passed is a lot better for motivation. I was going to reach my goal, so it was easier for me to stay concentrated until the finish line.

Some spectators told me it was 800m to go. I began to appreciate a bit and to understand it was finally the end. I was able to accelerate a bit, I thought about smiling for the final photo. But it looks like I did not do it. 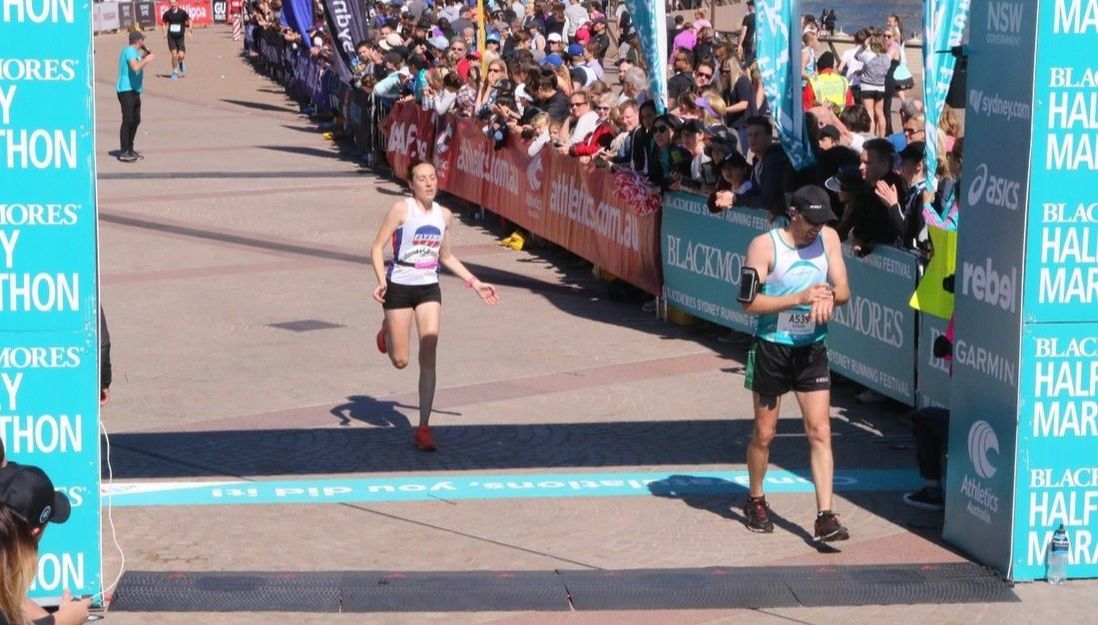