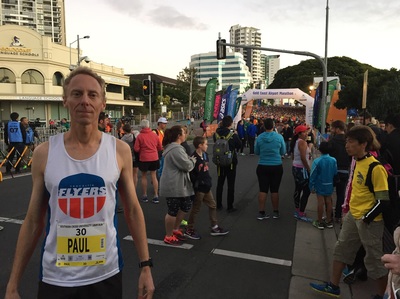 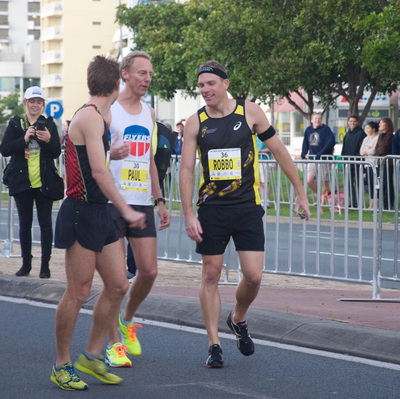 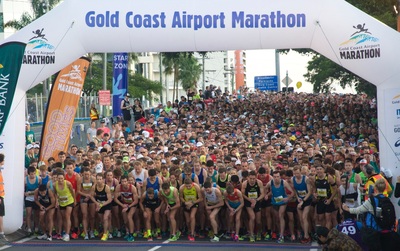 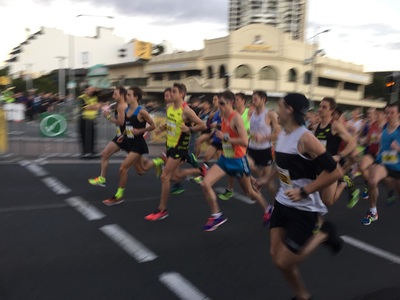 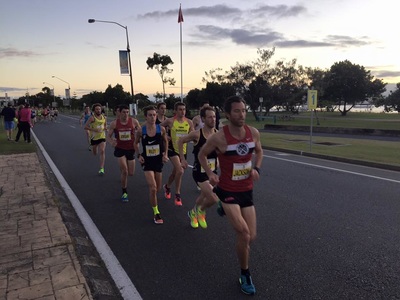 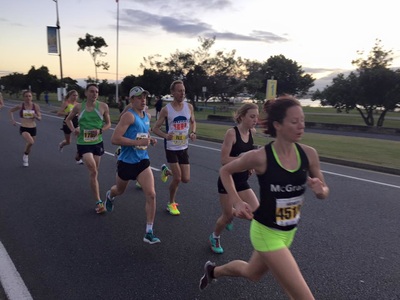 Okay. Concentrate. This is it. At 47 ½ years old the chances of bettering my lifetime PB of 34m06s (set in 2009) are diminishing rapidly so it’s time to focus. Taper was interrupted by a 2 day bout of gastro but it’s ok….we’re here and we’re standing. It’s pretty cold and I’m a bit hyper….. the race start has been delayed by 15 minutes and the 2 No-Doz tablets that RP recommended I take 1 hour before the race have really kicked in! I’ve never taken them before and I don’t drink coffee – so my brain is doing cartwheels! I say a last hi to Ali and the girls and also see Mel and Matt Roberts who are all near the start line – my hyper state doesn’t go unnoticed!
I’m on the start-line – in fact right behind Vlad in the seeded section thanks to Robbo putting in a good word with the event organisers (thanks Robbo!!) After a stressful week at work followed by the bout of gastro on our holiday this week I have no idea how the less-than-ideal build-up will affect my race. Time to find out. I can’t tell if I’m just nervous, still sick, or just hyped up on caffeine!
The pre-race organisation has been marvellous. Running as a seeded runner is cool – you get your own little fenced-off area (with its own loos!) with a few *very* athletic runners stretching and chatting. Vlad tells me he’s only running the first 5kms hard because the big race is next week at the Sydney Harbour 10km, which Runlab is promoting. Unfortunately I also notice my age-group nemesis Wayne Bulloch warming up which is a bummer because he’s been running brilliantly this year – he ran 33m15s at the Australian Masters Athletics Championships in April. (3rd fastest in the world this year for our age-group!) While the Gold Coast Airport Marathon Running Festival is probably the best in Australia, it does have some particular idiosyncrasies – like only giving out a medal/trophy to the age-group winner. 2nd place is ‘First Loser’. ‘Nil points’. ¡Nada!
For months (or years) I’d been planning 2 long-term goals for today’s race:
With Wayne in the field goal #1 was probably unattainable. So I focussed on goal #2.
As expected the race starts at a frantic pace. Vlad and the other ‘elite’ 30min runners quickly breakaway into their own group and the ‘elite’ females and ‘average’ seeded males form a second group. Man it feels fast! Last year the female winner ran 33m52s so the plan is to try to hold on to the pack of 5 lead females thinking this will be the 34 minute ‘bus’. Trouble is I can’t keep up. After only 2 kms they’ve already gapped me by 10 metres and I’m running by myself. Looks like my illness last week is going to be a negative factor if I’m already being dropped by all the elite females.
By the 4th km things have improved slightly with a few of the runners in the 2nd pack slowing and fading. The reprieve is short-lived as Wayne cruises past me at 4.5kms looking smooth and taking great racing lines. I try and hold on to him but I’m going to blow up if I do the whole race at his pace. I back off to my own pace and let him get on with his.
At 5kms my worst fears are confirmed when I see the big LED race clock ticking over exactly 17:00 min as I cross the ½ way timing mat 1 second behind Wayne. 17 minutes…..not good! It felt a LOT tougher than that!! That’s it - goal #2 is also slipping away because there’s no way I’m going to negative split given how dodgy my stomach feels. The illness has obviously taken its toll. Also – (note to self) – who tries something new (like a non-coffee drinker taking 2 caffeine tablets) on race day?! Idiot! No wonder I feel like I’m going to lose my breakfast.
Even though the race now feels it’s a write-off I focus on Wayne who doesn’t appear to be pulling further away after gapping me by 30m. Perhaps he’s having a bad day – I try to stay close in case he struggles further. My stomach feels lousy and why do my toes hurt?! Another mistake. I didn’t tie my shoe laces up tightly enough so my big toes are hammering into the end of the shoe.
Kilometres 6, 7 and 8 are painful but at least I’m keeping up with Bridey Delaney – who I’ve run the whole race with – she would go on to finish 3rd female. However things deteriorate in kms 9 and 10 as I slow slightly and now I’m just longing for the relief you feel when you stop running!
Although one thing does give me a boost - running with your name on a bib means lots of people are shouting your name towards the end of the race - so I attempt one last push as we enter the finishing area.
As I round the final corner on the blue carpet and squint at the finishing clock in the distance I read 33m43s. How is that possible?! Who cares – it’s time to sprint!! I don’t remember much about the final straight but I cross the line in 33m56s to finally achieve a goal I’ve had for at least 6 years. Happy. Relieved. Exhausted. Running is awesome!
﻿﻿My (adjusted) Garmin splits were: 3:12, 3:21, 3:19, 3:25, 3:23 (16:40)   3:28, 3:26.5, 3:26.5, 3:29, 3:26 (17:16)   = 33m56s
Turns out the halfway race clock was 20 seconds fast. (I should’ve checked my watch.)
I’m constantly amazed how you can continue to learn about a sport even though I’ve been running for years. I learned today that great training can compensate for a lot of minor mistakes. Working hard to follow RP’s excellent Flyers training/racing advice in conjunction with Adam Clarke’s superlative Personal Training produced big improvements. I.e. training smart will produce results.
A special mention to my wonderful wife Ali who’s very understanding and supportive – even though my one-time hobby has somehow morphed into a fully-fledged ‘lifestyle’ for our whole family over the last 10 years! 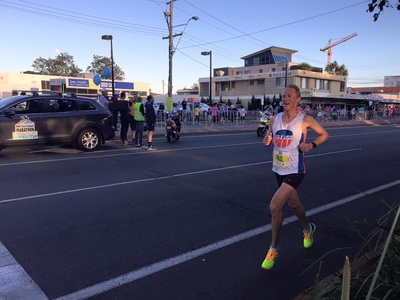 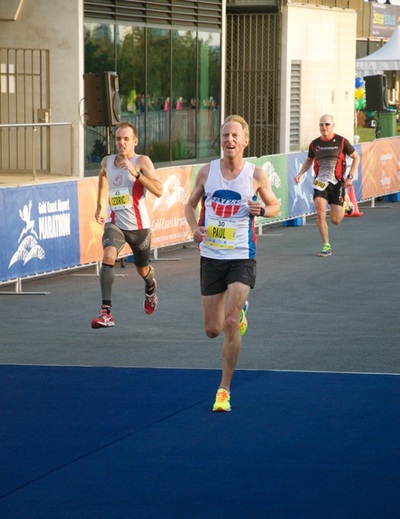 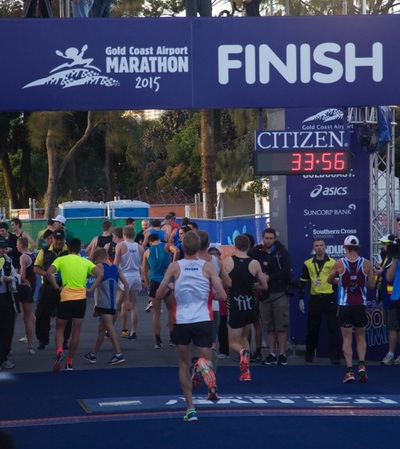 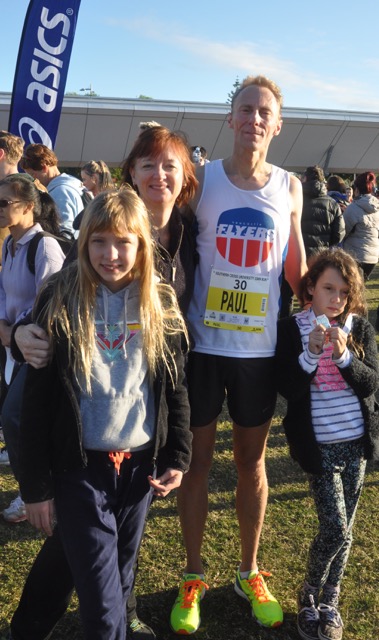