Sydney Marathon 2019 was my first marathon since I started running in 2017.

Although, I have always enjoyed reading other people’s race reports, I didn’t feel I had anything special to say about my races other than the time or placing I achieved. Now that I have run a marathon and have it go to ‘plan’  I feel I can at least share why it went to plan. So it’s not just words on paper I have given my race report some structure:
That way if you just want to know about the race you can skip the training part or vice versa. I hope you enjoy.

Finally, I get to the race part!  I was fortunate to have my running wife and number one training buddy by my side for the event. Louise accompanied me to Sydney the day before the race and we stayed in North Sydney. It’s tricky deciding where to stay - close to the start or finish. There are pros and cons of each. I like to keep my stress minimal prior to the race and happy to ‘suck up’ catching public transport back to your hotel post-race. 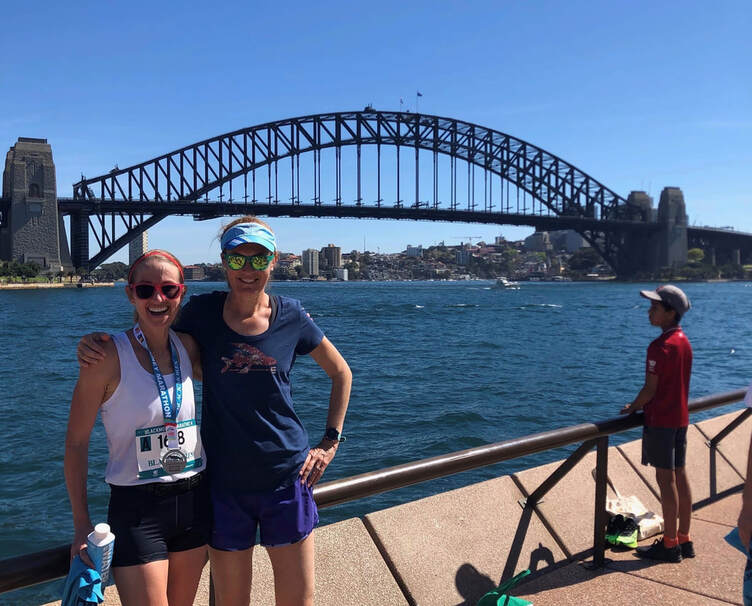 ​Yay - no Furber! I knew this would be hard and I had prepared for it. Another fellow runner seemed well prepared for the battle ahead and pushed on with me past the carnage of the marathon, trying to cheer on his fellow runners. We passed back under the bridge and I could see the Blackmore flags. I turned and said to him, we have just got to get to those green flags and we are done! I didn’t really care about my pace during the last 7-8km, I just pushed as hard as I could to the finish line. The last km is such a blur of joy, excitement and relief. I was going to finish my first marathon. I saw plenty of people in the crowd from my running clubs of Newcastle, my running buddy/running wife Lou all cheering me over the line.
As I crossed the line I was intercepted by one of my work colleagues who was the medical director with a big cuddle and then I spotted one of my  fellow Flyer runners and she had smashed her pb, gone sub 3 and was named the Australian Marathon Champion - amazing Ingrid Cleland.
Other Flyers, Robbo and Russell also smashed out a sub 3hr marathon - well done gents!

Overall, the Sydney Marathon was a fantastic event, great weather, great scenery and great support along the course from the crowd and fellow runners - who said road runners aren’t friendly! I was really pleased with my time but I was mostly pleased with my race execution. I stuck to my pacing plan, I drank and ate as planned (even if I didn’t feel like eating), I didn’t panic when I started to feel crappy but used my mantras to redirect my attention.
​As Eliud Kipchoge would say ‘It was a beautiful race’.