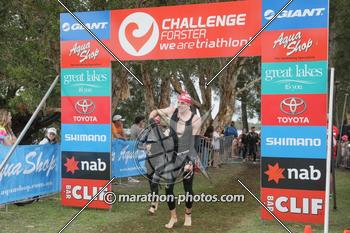 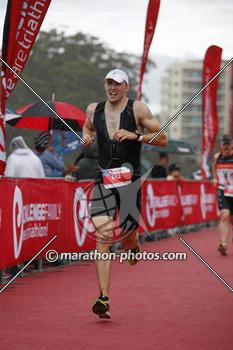 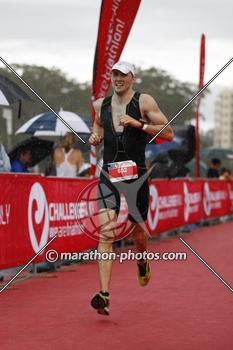 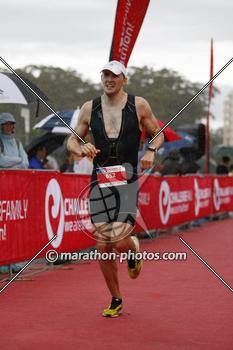 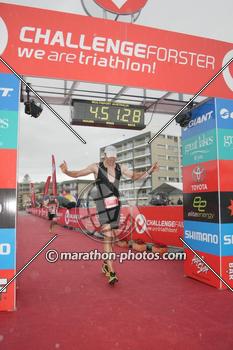 Race Date: November 23rd    Results: 2013
This was my 2nd 70.3 of the season. My first was in Mooloolaba 70.3 in September 2013, a race that did not go as I had hoped. After a strong off season of training I was expecting a time of around 4:40 (a 36 min pb) but ended up doing a 5hr race. Hot conditions on the day hurt me in the run leading to cramp around 18km mark.
I was determined to break the 5 hr mark with my last long distance event of the season. As a result of Mooloolaba, I changed my nutrition to allow me to deal better with hotter conditions. I did a number of sessions where I intentionally trained in mid day heat and wore additional clothing to raise my body temp. I did a number of sessions that had the same duration as the race. I also began weighing myself after my long rides to see how much water I was losing. Even drinking 2 bottles of fluid on the ride I was losing 2kg/3kg on a warm day.
It’s fair to say I hassled and nagged RP to aide me in the creation of a better nutrition plan for Forster. If my race went wrong, with all the preparation I had done, I had only one person to blame, RP.

There was a lot of talk around the expected weather conditions in the weeks leading up to this race. Many experience competitors, with local knowledge, had described the expected conditions as windy and hot. Thankfully on the day, they could not have been more wrong.
Weather for the mid day start to the race was a very pleasant temperature; I am guessing around 20/23 degrees with very little wind. It was very unusual to be hanging around until 11 am before heading to the first transition, maybe next year it could be a morning start.
It was great to see a few flyers at the setup area getting ready to compete as individuals and as part of teams. The race kicked off at the Forster keys. A last minute change to the swim changed it from a 2 lap course to a 1 lap course. Visibility in the water was nonexistent but the salt content in the water made floatation easy. I would love to say that I completely smashed the swim but the reality is the swim course was short. By my estimations the swim was around 1.6km rather than 1.9km. I generally look to do a “reasonable” swim but I definitely do not push hard in the swim. I was out of the water in just over 26 mins which was a great start to the race for me.
The bike, a pretty flat to undulating course out of town with not much wind. After Mooloolaba my focus was on a solid bike that would let me run a 1:40 21km. The bike was going well until a storm decided to join us. High winds and lashing rain are not ideal. Being Irish, I will admit to thinking at the time, “The Aussies will hate this SO much more than me”. Mentally I took it as an advantage. I was off the bike in 2:28 (2 mins ahead of schedule) which I was very happy with given the bike course was 1km long.
One major criticism I would have with the race is that the roads were not closed. It led to a number of areas where it was not possible to pass the bikes in front of you and I believe one competitor hit a car. Going forward, if they want this event to really grow, close the roads!!!
The run…… I can honestly say be I have never felt better during a triathlon run.  My first 7 km were a little ahead of expected race pace. I pulled up on 9km with a really bad stitch but was back running 1 min later. I was tempted to really push around the 12 km mark but held off and was glad I did. At 15 km I was having to focus hard to maintain my pace. My shoes decided to tear my feet to shreds which was not helping. I think an investment in some decent running socks is required. At 19 km I decided to give it all I had but soon realised the pace I was going at…..was all I had. I finished the run in 1hr 37 min, 3 mins ahead of what I had hoped to achieve.
Overall I did a 4:37 race which was 23 min personnel best. I was, and still am, over the moon with the result.
If you are looking for a good medium distance local triathlon race, you can’t go much better than Forster.
A race report would not be complete without noting some of the extremely impressive flyer results:
Powered by