Race Date: October 19th    Results: 2014
My 2014 Fernleigh 15 is going to begin with the end here when I preface with the fact that I crossed the line in 53:07 as the 10th male / 11th overall finisher. At the inaugural event in 2012 I ran 59:50, so a 6 minute 43 second improvement two years later.
The first thing I did when Paul suggested I write a race report for the Fernleigh 15 was go back and read the one I wrote in 2012. That was at a time when I’d been doing parkrun week in week out (I had the fever) and was also a relative newcomer to the Flyers, having been done the long runs for a couple of months. I was making gradual improvements all the time, building mileage, trying to add quality sessions where I could. It paid off and I ran a 10k pb on the way to the 15km finish. I remember being thrilled that I had run under an hour.
One thing I have gotten better at in the intervening time is my pre-race nutrition. Two (small) slices of toast with peanut butter and a glass of gatorade later chased down by a mug of black coffee for breakfast. Half an overripe banana and a gel 30-15 minutes before the race and I was good to go. What was not good to go was my memory. When I arrived at the high school I realised I had forgotten my Garmin Forerunner watch, which is usually attached to my wrist anytime I run. I even had the heart rate strap around my chest but had neglected to put the watch on, so it dawned on me that I’d have to pace by feel and racing those around me. Not something i’ve done often but surely something that perhaps all runners should do more of these days. Particularly in a racing situation.
Quick warm up followed by some drills, a march down to the start line and boom, we were off. A group formed very quickly featuring both Flyers (John Doyle, Andrew Smee), local competition (Belinda Murray, Steph Auston) and a couple of out-of-towners. We headed off up the gradual incline hitting a hard but steady pace and I’d say sitting on it pretty consistently, accounting for the terrain variations. There was the occasional bit of banter but for the most part just solid, hard work.
As you’d expect the pace quickened on the long downhill and as John read the pace out occasionally I know there were times when we were approaching 5K pace. Still, the effort felt fast, strong and controlled. Our group picked off the occasional runner that had headed out very fast but could not hold it and we steamed along the track towards the Redhead drinks station. This is the only downer on the course, it’s a real shame the track doesn’t quite have the length for the accurate 15k without it. Coming out of the turn at the station John made a break for it and at first I thought I’d lose touch with him. Kept the legs ticking and the effort steady though and reeled him back in before passing, just after the 10K point I believe.
After I passed John I was out on my own and running for the finish the whole way. Somewhat surprised I’d dropped the group I expected someone to reel me back in but tried to resist the urge to look over the shoulder. Concentrated on maintaining that steady, strong but controlled effort. Eventually I passed a young guy who had been lightning in the first 11 but appeared to be losing steam fast. At one point in the final kilometre I caught sight of Travis and Celia in the distance and that spurred me to kick for the finish even harder. As I was watch-less I have no idea what my splits were but I would put money on the final one being the fastest. Much like the 2012 it felt good to be announced over the line by Dave Robbo, now a very familiar and welcoming sound. I knew I’d had a good run but really no idea of the time so hearing Robbo say the time 53:07 was brilliant. Truth be told, that is more than I had dared hope for.
When he suggested I write this report, Paul also noted that people might be keen to hear what it took to improve by nearly 7 minutes in two years. I could probably write a lot about that alone, but will try not to! For a start, my average mileage is higher than it was in 2012. It has fluctuated to be sure, but I’ve had periods of 90-100km/week running, particularly when training for Sydney marathon in 2013. As was also pointed out, I’ve slimmed down and gotten leaner. I’m probably 10-12kg lighter than at the 2012 event. Late 2013/early 2014 saw me add both mileage and quality as I attempted to build towards the Gold Coast marathon. Plagued by niggles and an eventually 6 week layoff + recovery I never did the marathon but I HAD made fitness gains. 2014 has also seen me join the ranks of runners training with Adam Clarke at his studio (my core/functional strength is now greatly improved) and add some swimming to my training regime. I firmly believe that the aerobic work and extra toning I’ve gained from swimming during my recovery have greatly sped up the process of regaining and in fact improving my running fitness/strength.
So THAT’S what you have to do to improve your time by 7 minutes in two years. Nothing to it really. 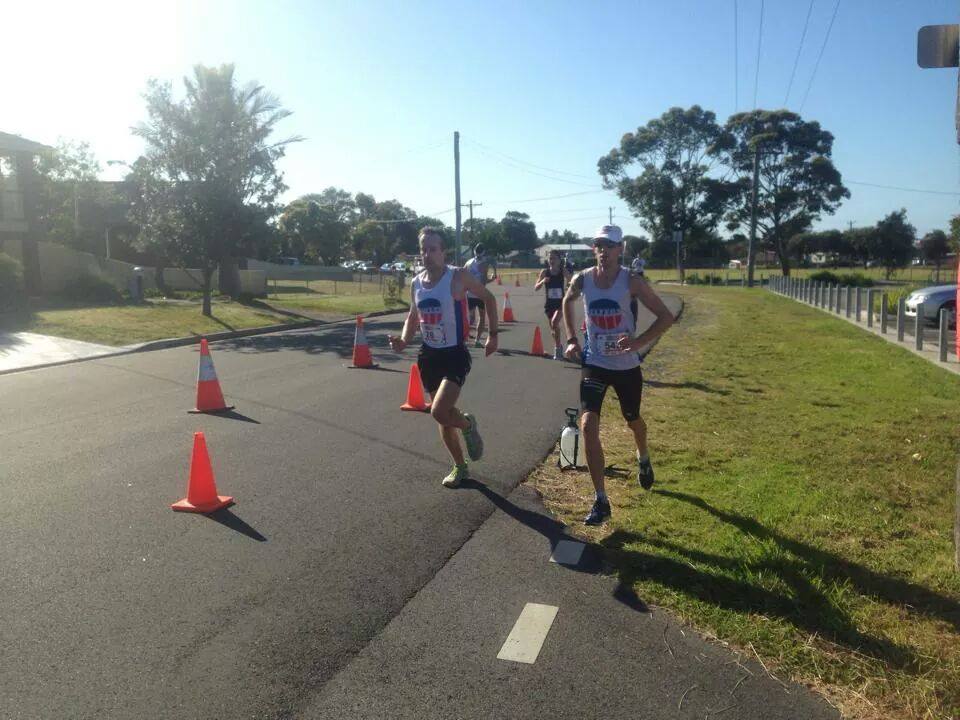