Race Date: August 27th    Results: 2017
Warning: This is me venting a whole years’ worth of ups and downs.
​
As some of you know last year I was diagnosed with 2nd degree Spondylolisthesis, the vertebras in my lower back are broken and out of alignment, and as a result I was contemplating giving running away. Dr Rob was initial pessimistic  about me continuing my lack lustre running career, however after a visit to the spinal specialist who was surprised that I could still function as well as I did, we revaluated to “reduce the volume and see how it goes”.

The diagnoses cleared up a few questions:

But it also asked a question about Gold Coast Marathon 2016. Was it the spondy that caused the symmetrical calf cramp or was it incorrect fueling.  Since it happened so early in the race and I had been on my feet a lot in the days prior, I am suggesting it was the spondy talking.

After a visit to Dr James, the Flyer’s resident spine cracker, he performed some magic. Walking out of the first session I notice a huge difference in the way I walked and subsequently how I ran. I no longer landed on at the front of my forefoot, but more mid-foot.

This had two effects:

At this point I was thinking the running game was over. However being the idiot all runners are, I kept running. The sciatica wasn’t as bad when I was running and went away after a good 3 km warm up.  However a runner’s idiotic determination wasn’t the only reason.  There are 3 more important reasons.

Firstly, I am a self-confessed computer geek. I work with computer and I like playing games on the computer. I could lock myself and play computer games all day.  I need another outlet and running is my drug of choice.

Secondly, the thought of regressing into the father who can’t help or participate in Corby’s activities didn’t appeal. Corby likes running and doesn’t mind going running with the old man.  I wanted to be role model of some sorts.

Lastly, I run because I still can. I see people of all shapes and abilities complete parkruns. Some are just unfit and will soon get better and fitter. Others have conditions worse than mine and if they can run a parkrun or climb Mount Everest, I can sure as hell put up with some pain and do it too.  It would be a disservice to all the people who can’t run, but would dearly like to be able to, if I threw away my opportunity.

After a while, what surprised me the most was the speed work was easier and sciatica didn’t hurt. Longer runs were still uncomfortable after 90 mins. I used to think I was soft, but now I realise I wasn’t soft but everyone else was. Heck if I could run for the last 30 minutes then all you other guys had it pain free and easy. I started to envy the Sunday Dirt Train. The thought of running for 3-4 hours and just being tired seemed too easy.

In terms of programming, there were 2 main changes in my programming this year. The long course Newcastle Cross Country on Saturday at solid tempo or threshold and longer GA runs. The NXC got me used to running hard when fatigued.

Anyway back to the Lake Macquarie Half Marathon and City2Surf . The City2Surf was intended as a stepping stone for the Lake Macquarie Half Marathon and the Fernleigh 15. Apart from KOM I performed no specific training.  The last few weeks of running have been very good. Paul Fenton can attest that my easy pace was faster than normal, “Are you surging again?”, however it felt easy and my heart rate was sitting in the famous Maffetone zone. Something good was happening.

​The question was the Goal and Pace. I found this old website for predicting C2S from other runs. I put in my latest 10km, Sydney Harbour 10, and it popped out with 54:01. Sub 54 min is was. Matt Mahony was gunning for 54:30 and I consider Matt to be a flat course peer (Scotty Alder is definitely better on the Mountain Goat stuff as KOM showed) so I didn’t think I was being unreasonable in my goal.

Back in 2011 before I knew anything about running, I tried out Pat Carroll Online Coaching.  He uses the City2Surf as Half Marathon Predictor. You should be able to hold the average pace for City2Surf in a Half Marathon.

Race Day
The two alarms were set, in case one doesn’t work, for 5:30.  Breakfast was tried and tested Peanut Butter, Banana and Honey Sandwich. Washed down with blackest long black in Newcastle.

The day before I had miscalculated travel times and hadn’t had time to pick up “The BIB”, so I made sure to get to the start early. If you ask Corby she will tell you that getting to a race early and Viktor don’t usually go together.

I must have been one of the first arrivals at the Esplanade, and I picked up the bib and the Grippel’s were kind enough to pin it on for me, making sure of any bib infringements.
​
The weather was perfect. Cool but not cold and the nasty wind from Saturday had disappeared. Perfect racing conditions.

Must have been about 6:30 and there was plenty of time. Maya even had time to try on some new shoes at the Pure discount rack, and decided to race the Half in them.  I know I know. Don’t change anything on race day.

There was a good crowd was starting to build and I wondered over to Flyer HQ.  The usual suspects were there and after a little while we started to warm up. Morning running doesn’t agree with me and I normally take a few km to actually start to be able to run and I really appreciated the lazy warmup.  I finished up with a few strides to open up the blood flow some more and made my back to HQ.

At HQ Brad Gibbins asked me what pace I was planning and I said 3:50. I need 3:52 however the Garmin rounds up the instantaneous pace to the nearest 0:05, so 3:55 wouldn’t make it. Surprisingly Brad said he will stay with me. I thought he was a bit stronger and faster and was underselling himself.  After the last splash and dash toilet stop we were all on the start line.

The Race
I found Brad and Reggie loitering at the start and I joined them. A few minutes later we were off.

Starts at these events are always fast and today was no exception.  It only took a few metres and Brad and Reggie were gone. Not to worry, pace was 3:30, and a little too hot, so I slowed down and worked myself into a grove.

Coming to the first of the outbound hills, I was maybe 30 metre behind Brad and Reggie, however by the time we got to about 1.5 km I had caught up to them. Reggie greeted me with “I was wondering where you got to”, which I responded with “been taking it easy”. A guy next to us let out a surprised chocking sound.  That was the last I heard or saw of him.

This was the start of the Brad-Viktor-Reggie train.

A little later Reggie commented “The think this is ego talking and I am going to die in the back end”.  Reggie is one of the toughest competitors I know and I wasn’t sure whether to believe her fully, but she did have the excuse of Barrington Corker race the previous weekend.

Brad and I were sharing the lead and Reggie was tucked in behind. Jordi and Emyln weren’t too far ahead. Their goal was sub 80, so our pace was looking promising. Maybe we could get closer to 80 minutes?

I think Reggie must have a paid support crew. Every few metre there was a “Go Reggie” shout-out.

Coming into the pool complex section Brad nudged me to lead through the park and the pace seem to surge a little. Once we were out of the park and back on the road, I can’t recall seeing Jordi or Emyln in front.  They must have put the peddle down.

There was nothing eventful on the way out to the turn around and back to the playground. Sure there were a number Flyers cruising past and some music. At the turn around I made a mental note of the chasing runners and I could see Scotty Alder about 10-15 seconds behind. Scotty and I have a friendly rivalry and today “Getting Aldered” was not going to happen.

Don’t know what it was but the concrete path next to the playground just upset my rhythm or something. I just didn’t like it and was relieved to get back on the road.

At this stage Brad and I were running side by side, and I think Reggie had started to drop a little.

At the drink stop at Speers Point Brad went for a drink. I had already decided not to fuel or drink. I tend to chock and it throws me for a few minutes.  This played to my advantage a little, I was able to follow the racing line and Brad had to run a few extra metres. It all counts.

As we were traveling back to the start the pace was still good even up the slopes.

By now we must have made small gap on Reggie and Brad was getting all the call outs, “Go Brad”.  For every fifteen “Go Brad” there was one “Go Viktor”.

The halfway mark came and went. Now lap 2 was on.  At the turn around I think the chasers were 20 seconds behind and closing in on Reggie.

Brad and I were mostly lock stepped.  The only time we weren’t was when we travelled the bend of the hills. I made sure I took as much of the racing line as possible.  When traveling across the top I realised what Reggie was up to on the out lap. She was using Brad and me as wind breaks. I noticed when I went to come alongside Brad that the wind picked up, so using Reggie’s tactic, I sensibly slotted in behind Brad again.

It was starting to get tough. I remember running past the Kids Scamper Cones and wanting to turn back, but quickly realising that I couldn’t win that one either.

Coming into the Park again, Brad picked up a gear and disappeared across the grass. I thought he was gone, and I was going to run solo. But I soon caught him before the getting to the Bridge.
I was really starting to suffer and really need to complete the last parkrun 5km.  I counted the seconds slowly to 26 before I passed the chasing pack heading out to the turnaround. Excellent. That would make the gap about 40 seconds, and they would have to bridge it in 5km, or 8 seconds per km.  If I keep the pace steady and don’t drop they will need to be running sub 3:50 for the last 5 km, which they didn’t do in the first 5km. Fat chance of them catching us. But I had to keep going too.

Doesn’t everyone doing running math calculations during a race? 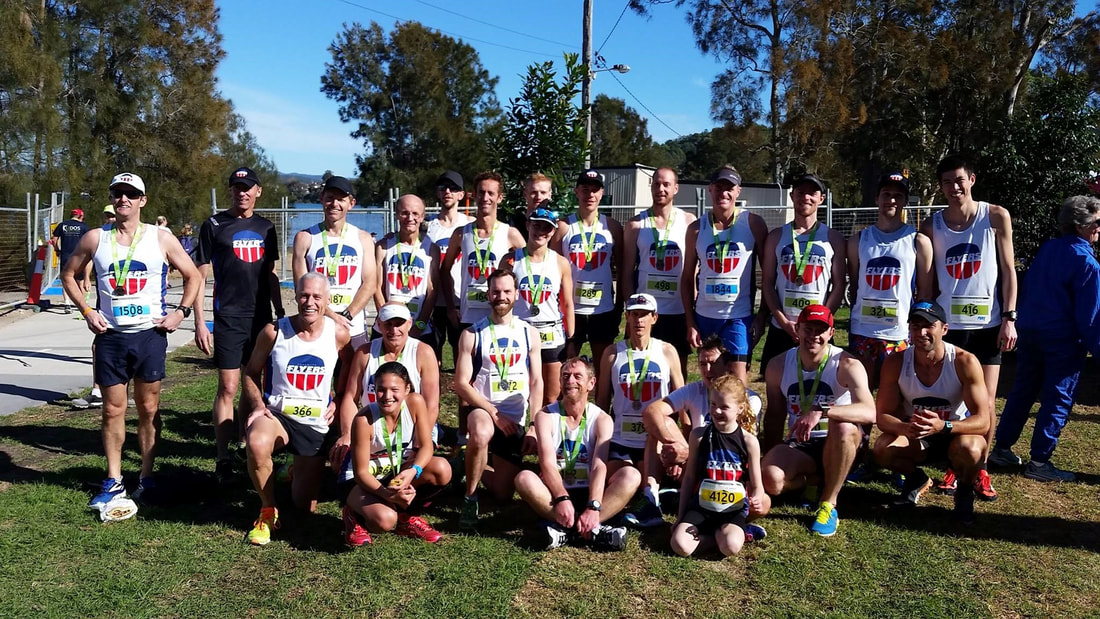