With lakemac half 2 weeks later and plenty of other races in the weeks and months before it, I’ve done little in the way of specific race prep for this event, save for taking it easy in the last couple of days before it. I did set myself some goals though.
Three of us head down at 4 am, Gordon, area manager from work and Steven, another mate who is a very good runner himself in my age group. We arrive at Bondi Westfield to park at around 6 am, plenty of time to get to the start and gear drop. Wisely we all put jumpers or jackets in the gear drop so we don't freeze at the finish. Thankfully the tall buildings have blocked the wind, its cold but calm. Some cursory warming up and loo stops. With a bit over ½ an hour to go I drink my pre workout 101 and go straight to the Red Start area, working my way through the crowd to get as close to the start, its game on for me and I'm keen to do my best.

​I come up to Richard Palmer, we exchange greetings, and Richard shouts “Race line! Take the race line!” Though I was mostly doing so I make a conscious effort to do so, moving across the road to smooth out the turns, as Richard does the same.
The top arrives heralded by another timing line. Heartbreak hurt more than in 2014 as I hit it hard, and it was trying to hit back. Onto a downhill and the pace reaches 3:20, but doesn't last long as more little hills come. We get out first good look at the ocean, watch says I'm more than 2 minutes ahead and with my improved downhill running it’s growing second by second.
I see another Flyer ahead, one of the super successful women's team who came first in the teams results. She’s powering along and it takes me a long while to finally catch up and pass on greetings and encouragement.

​On the downhills I just love it, up to 3:20 pace and passing quite a few. More nice views of Bondi getting closer and closer. Watch time ahead now over 3 minutes! This is turning into something special for sure.
We level out and are hit by gusty headwinds, pace slows to over 4 in parts, but not far now, less than a km, we take the 180 degree turn, and people are starting to sprint now as we all ramp up the effort, finally the final turn onto the finish straight. Now where is the actual finish? 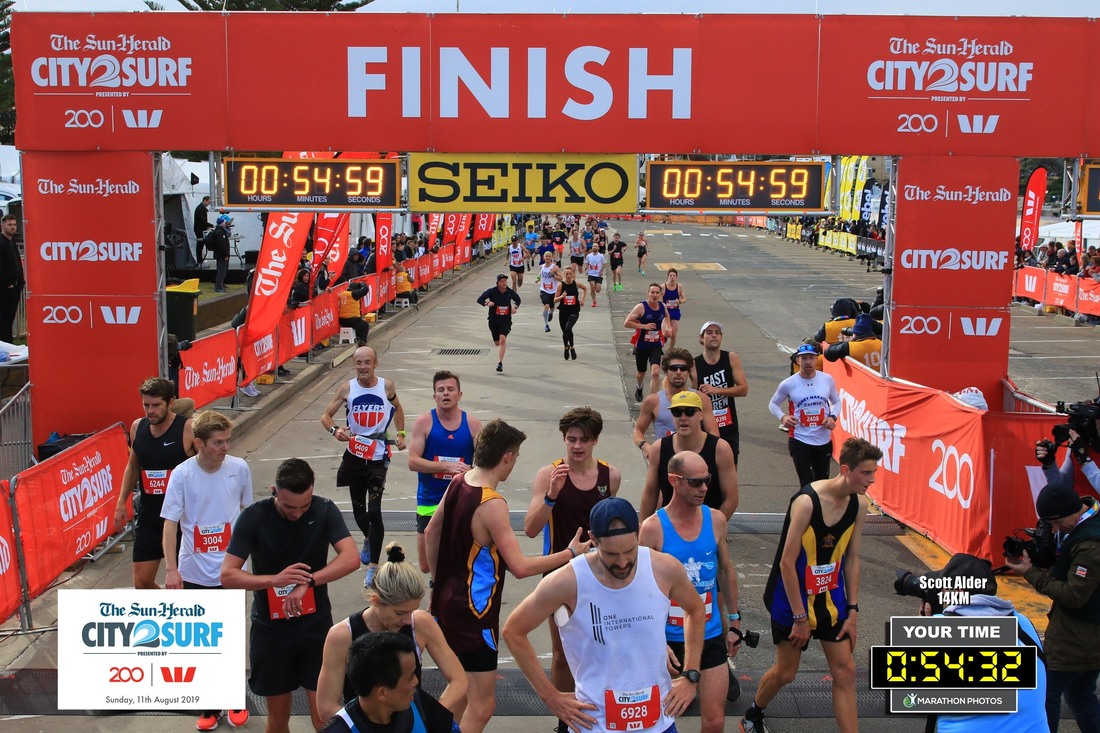 ​There are plenty of Flyers about, and soon they assemble for group photos, now I’ve achieved the pinnacle of my running career, I’ve made the famous Post C2S Flyers Group Photo as I join the group.
Out with our phones as we all start uploading our runs. It’s there I get a shock, one goal I never bothered setting was running this event at sub 4 average pace, for me it couldn't be done, but there it was, and official result was 3:55!
We head over to the gear drop to get our jumpers as we feel the chill. I'm in a bit of a daze with no idea how I managed a result like that at the age of 54. I take my post run whey protein drink and jelly beans for simple sugars.
We meet Gordon who put in a super effort with a dodgy hammy that was taped up but he finishes okay.  In a super credit to the race organizers the wait time for buses was next to nothing, with military precision the buses come in and pick us up bound for Bondi Junction. Most get on trains to head back to Sydney we head to the car to change, get wallets etc. then upstairs for brekky while we look up the official results, then homeward bound.

Lee Williams pre-race prediction of me was so accurate it was scary, 54 to 55 mins, net time official was 54:32, almost dead center of his prediction:
​Soon our social media is full of happy reports of people thoroughly enjoying the C2S, PB or not it’s a brilliant event, and a huge number of running clubs and groups were there. It’s a super well organized event, amazing for the near 80,000 people there. Its great reading through Strava and FB of people’s exploits in the run.
​Thanks to all the fantastic running groups and clubs, to Gordon and Steve who provided me great transport and company there, and to all the other great people I know in the running community. Well done everyone.​
Powered by