​You might think it a bit unusual that a race report for the 2017 Sydney Marathon begins on the other side of the world in Paris, over 9 years earlier, but it sets the scene for what would become a prolonged journey towards achieving a prized running goal.
A month before making our debuts over the marathon distance, my wife Gabby and I flew across from our then home in Edinburgh, to Paris for the weekend to celebrate Gab’s birthday. By chance it was the same weekend as the Paris Marathon and needing a long run ourselves on the Sunday we kitted up and hit the streets to soak up the atmosphere.
Our very unplanned run saw us end up at the half way mark of the marathon where both a patisserie and a a Metro station were conveniently located. After refuelling with a coffee and a croissant we jumped on a Metro service headed back to where we were staying.
Sitting across was a big, burly bloke who spotted us in our running gear and started chatting. Turns out he was from Boston, had a connection with the Boston Marathon and was in town watching his son run the marathon.
Determined to make amends for previous attempts at the distance and hungry to upgrade the PB set in Sydney in 2010 of 3:01:05 (or 2:61), I threw more mileage and training hours at the preparation for this race than ever before - road Marathon number 10, Sydney Marathon number 5, 2017 Marathon number 3.
However unlike standing on the start line before a 5K or a 10K, you can never be quite as confident with the Marathon that good preparation is going to lead to a good result. Nonetheless I was feeling better than ever and ready to give it my best crack.
The plan was for Team Robbo to travel down to Sydney on Saturday morning and stay at a Hotel in the City. However our youngest daughter Emma had other plans as she had picked up a gastro bug late in the week and was setting household records for the amount of vomiting in a 24 hour period.

​Excitement is high but I try and relax as we make our way up and over the Harbour Bridge. Charlie runs next to me and we have a bit of a chat while taking in the experience of running across this mighty landmark, free of traffic.
This means that every 20mins (about 5km), at the aid stations, I am downing a cocktail of Lemonade Gu Roctane gel, 2-3 sodium capsules and whatever electrolyte drink I can manage to actually get to my mouth from the cup and swallow. It certainly breaks the rhythm a bit but its all part of the plan to better negotiate the final part of the race.
On the approach to Centennial Park I see Kurt heading the other way and offer him a cheer. Charlie is still running with me as we enter the park, before he peels off to go and run with another mate. I know there are about 10km to cover inside the park. Time to put the head down and keep the kilometres ticking over.
We pass through 15km. 20:27 for that 5km. Another aid station fuel up then a chance at one of the many 180 degree turns on course, to see fellow Newcastle Flyers Jordi Bates and Steve Gallagher who are running together only a few hundred metres behind.
​The next few kilometres seem to take a while to pass (16, 17, 18, 19) and I’m now eager to get out of the park and reach the half way mark. I miss a cup at the 20km aid station which again alters the rhythm but am happy with another solid 5K split of 20:21.

Leaving Centennial Park through the Robertson Road gates I get a welcome cheer from Nat Heath and Rich Munro before getting to Half Way with the clock reading 1:26. Maybe a bit quick I think but the body and mind are holding up well and the next mission is to make to 30km where I’m sure to get a real test of how I’m travelling.

The downhill sections from Taylor Square to Hyde Park, and again from Hyde Park down to The Rocks are welcome, reflected by the split at 25km of 19:40. Although due to one of my feet starting to ache a bit I find I’m not completely comfortable letting myself go.

I had made a decision pretty late on in my training program (final 2 weeks) to race in a pair of Vibram Fivefingers. My last long training run in ‘normal shoes’ (Hoka Tracers) had seen an increase in discomfort in a spot under my right 3rd and 4th toes. A problem I had first noticed many years ago but had only started to change the way I ran in recent weeks. (look up ‘Morton’s Neuroma’). The foot and toes were not liking being squished into the toe box of the shoe but I found there was absolutely no pain running barefoot or in Fivefingers.

I’ve run a fair bit over the past 7-8 years either barefoot or in Fivefingers including over the Marathon distance, so my body and lower legs have been able to adjust. However from 25-30km onwards in this race, I was aware of the slowly increasing overall ache in both feet but I figured it was better than the nerve-type discomfort I’d previously experienced in the shoes and would just have to deal with it.

Passing through The Rocks is cool as the crowds are pretty strong and vocal but I’m aware that the number of runners around me has really dwindled. As we pass under the Harbour Bridge heading to Pyrmont along Hickson Road its suddenly very quiet.
​I see Jordi and behind him Steve again, on the out and back section of Pyrmont Bridge. They are both looking strong but like myself no doubt awaiting the big physical and mental challenges ahead.
I find it tough going through the streets of Pyrmont. Plenty of twists and turns and a couple of unfriendly little rises mean its difficult to establish the rhythm found earlier in the race. On the other hand, it might just be that the pace of the first 30km is starting to catch up with me. Or I just need to harden up a bit, roll up the sleeves and knuckle down. 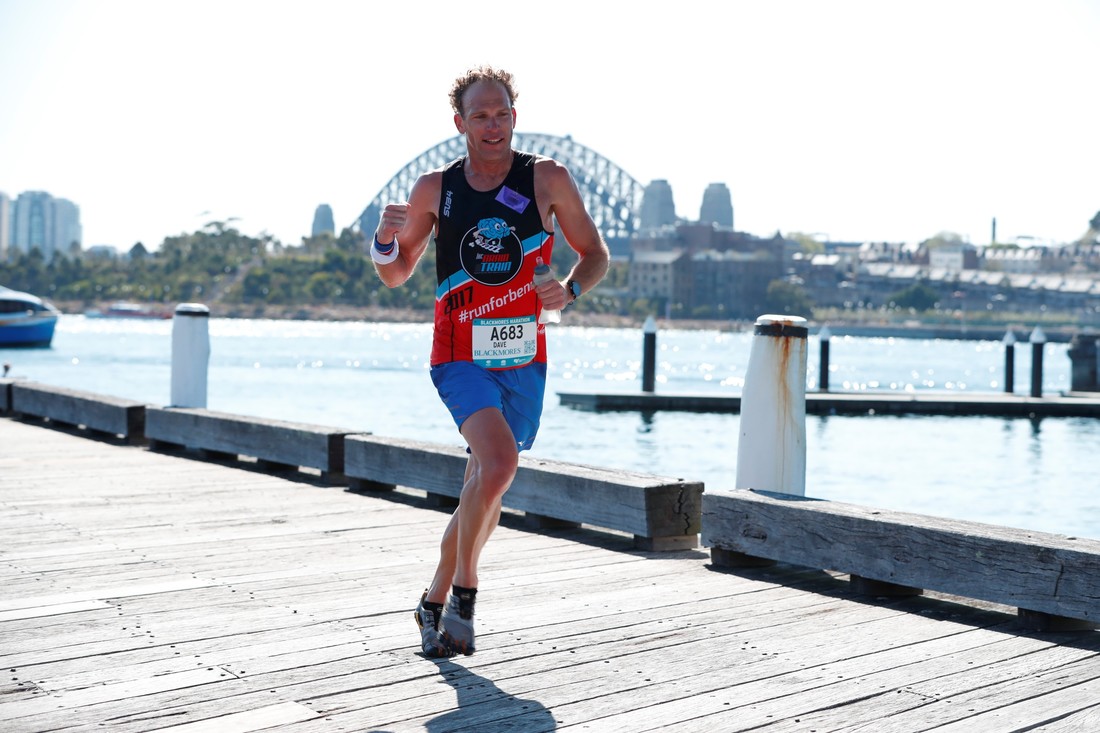 Conditions still seem to be pretty good although I am noticing the warmth of the direct sun and take pleasure in running through some of the more shaded sections of the course.

Time wise I’m pretty much where I want to be and I feel like I’m right in the fight now. With 10km to go the splits are slowing a bit and I like many other Marathoners at the same point in a race catch myself starting to do the maths in my head to determine the minimum requirements to achieve their goal, in my case to break 3 hours, the primary goal of the race. 5min pace would get it done from here and I’m holding 4:15s.
The feet are still increasingly aching, with the rest of the body now joining in as we wind in and out of the piers along the water. The 35km mark finally appears with the last 5km split indeed slower, 21:35. My focus now is to hold it together to reach the ‘parkrun to go’ mark. 4:20s are now the norm as I make my way around Darling Harbour. I’m pumped to once again see Nat Heath who is shouting out support which provides a much needed lift.
Shortly after I finally I hit the 37km mark and say out aloud ‘1 parkrun to go!’ I start to visualise running the Newy parkrun course but when I only get 1km further I’m thinking ‘Shit, that’s still a fair way left to run!’ No more visualising, just keeping ticking along and bagging those metres and kilometres. I’m still doing the maths and calculate that 5min pace would get the sub-3 done from here. 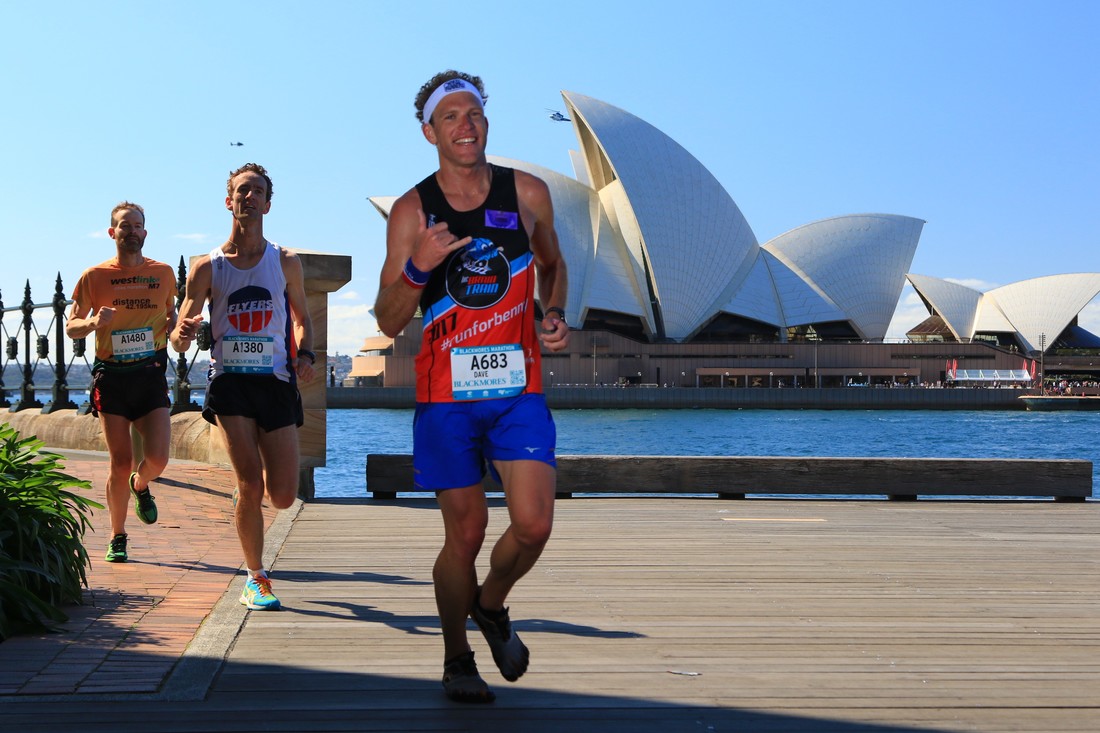 Up the final ramp and onto the cobble-stone path leading to the finish chute. Pat Carroll is giving it his usual hi energy treatment on the mic and get myself up to go hard for the line. Only to be sniped down by the most intense left hamstring cramp of the day which took my breath away and produced with it a couple of choice swear words. There couldn’t have been 50 metres left to go. 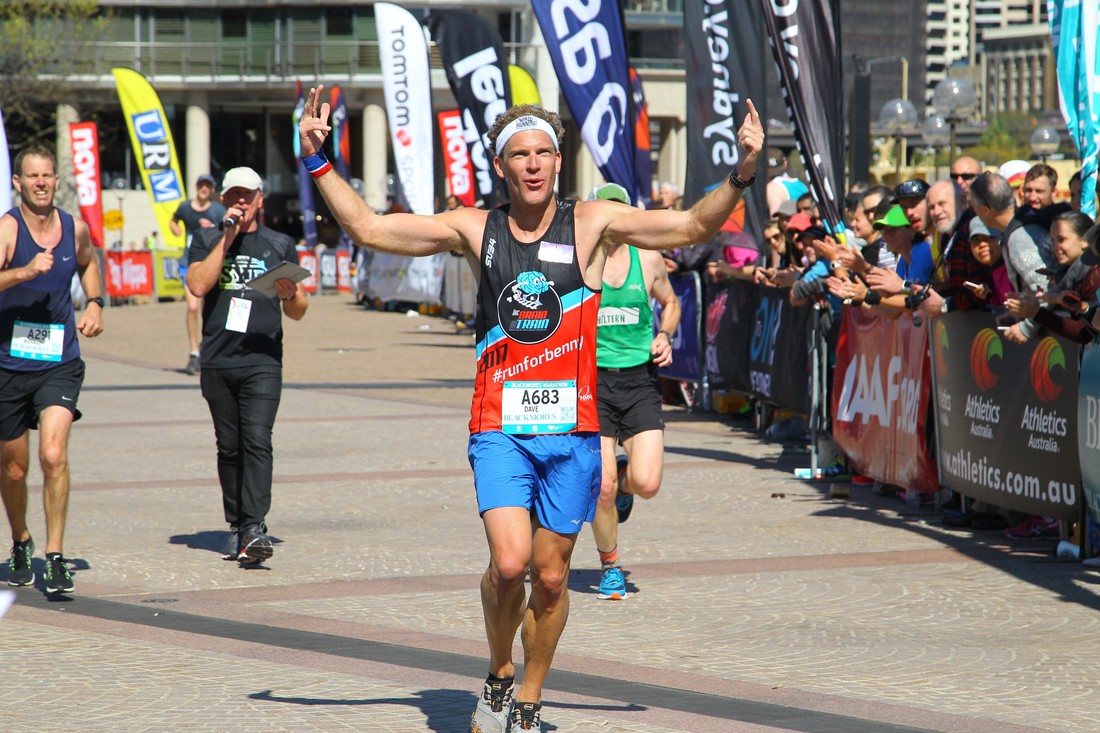 I considered rolling to the line if I had to but the hop strategy seemed to work ok and then with 10m left to run I could run again and it was a special moment to cross that finish line and fall into the outstretched arms of Jordi and begin the celebrations for both of us breaking through the elusive 3 hour mark for the first time!
​FINISH TIME: 2:56:26 (1:26:00/1:30:26). 74th overall. 2nd Dave.

After sweaty hugs of happiness with Jordi, Reidy, Pete Higgins and Pete Davis around the finish area, there are more hugs and a few tears with Jordi’s family nearby. Jordi’s late wife Jen in our thoughts for the race and there’s no doubting just how proud she would be of Jordi.
Its been a day of honouring another friend who is no longer with us, Benny Walton. It was a privilege to be a part of the ‘Brain Train’ team to #runforBenny and help raise funds for the Mark Hughes Foundation.

It was fantastic to see other members of the Brain Train out on course, including Ben’s wife Shelby, as well as on the steps of the Opera House after the race. I managed to bump into Mark Hughes himself who comments just how much he is once again blown away by the support from the Brain Train. 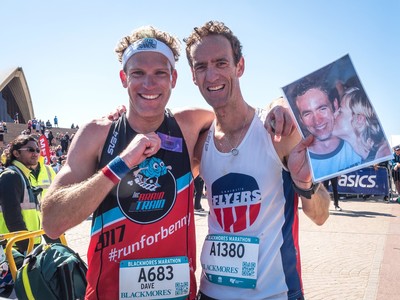 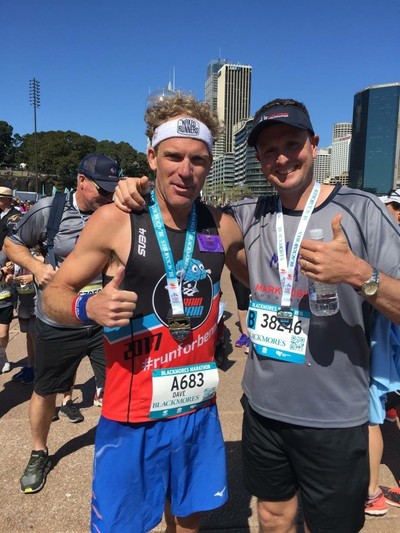 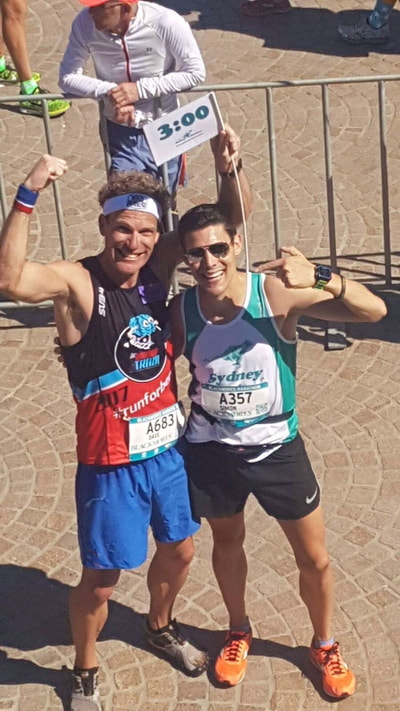 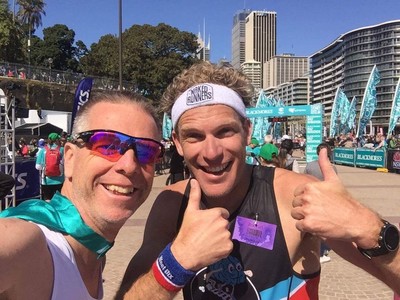 There is more time to soak up the buzz in the afterward where the t-shirt and medal are collected. I notice a solid layer of white salt coating my arms and on the shorts and singlet. I’m caught somewhere between wanting to drink, eat, vomit or lie down. The finish area of a Marathon is not a pretty sight. The rigours of the 42.2km journey taking its toll on all those around me as well.

Its great to catch up with 3 hour Pace Bus Driver Simon Wolnizer, happy that I didn’t require his services today.
Time for a quick post-race interview with Pete Davis Captain of the Sanitarium Wellbeings Run Against Violence team:
Then one last push for what seems like the biggest effort of the day… the approximately 1 kilometre walk from the Opera House back to the hotel. Finally I make it, stuffed but satisfied.

Huge thanks to my wife Gabby who has been an amazing support this year and there’s no way I would have been able to put in the time to prepare for this race without her.  Also, for the feat of sitting on the couch nursing a vomiting child for the best part of 2 days, deserves the medal way more than I do!

Thanks also to the Newcastle Flyers, KART, Glenrock Dad’s Club for the company and support during the training sessions. Thanks also to Alicia from Compeat Nutrition.
It’s great to have finally gotten the sub 3 hour marathon out of the system and I look forward to having another crack at the distance sometime, but maybe somewhere with a temperature no higher than 10 degrees for the entire race.
​And to my mate from Boston on the Paris Metro all those years ago, thanks for the motivation to prove that this rugby player could do it! 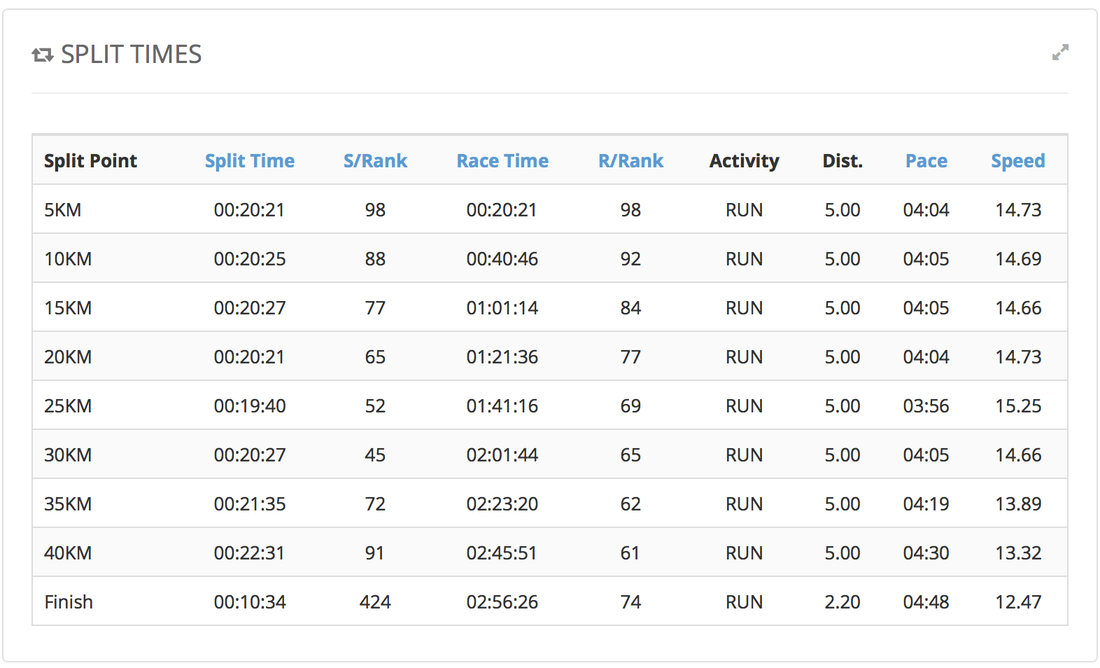