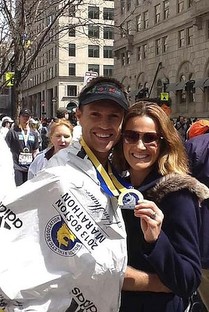 Angela Clarke had stood for hours in the 10-deep crowds near the Boston Marathon finishing line before catching a few frames of her husband, Adam, as he pounded his way towards his best run yet.

An hour later, when the couple from Hamilton in Newcastle were back in their hotel room two kilometres away, terror struck.

The first bomb erupted right next to where Angela had spent the morning.

''She was really distraught about what happened to those people who were standing there - or if they were still standing there,'' her husband said from their hotel.

Many of the Australians who survived the explosions were within metres of the two bombs near the finish line on Monday night.

In all, 156 Australians  were registered to take part in the marathon. Athletes Jeffrey Hunt, who finished eighth, paralympian Kurt Fearnley and Benita Willis confirmed on their Twitter accounts that they were safe. No Australian deaths or injuries have been been reported.
Many competitors were staying at the Fairmont Copley Plaza Hotel, the race headquarters, about 100 metres from the finishing line. Police evacuated the hotel and locked it down after the explosions.
Some Australians had finished the race and were resting when the bombs went off.
Among them were runners who had gone to the US as part of the Indigenous Marathon Project, which each year selects and trains a group of young indigenous men and women to compete in the New York City Marathon.
Project director and marathon runner Robert de Castella was with the project's chief executive, Tim Rowe, at the hotel when they heard the explosions, which he described as ''enormous thunderclaps''.
''You could feel the vibrations through the room," de Castella, who won the Boston marathon in 1986, told ABC radio.
He and Mr Rowe searched for Emma Cameron, who was later moved from the course and reunited with them. She had been just over a kilometre from the finish line when the bombs went off.
"It's a terrible thing to witness, to realise that this sort of thing can take place," de Castella said. The trio will return to Australia on Thursday morning.
Runner Craig Doherty was walking back to the finish line to take photographs when an explosion tore through a group of spectators. It knocked down at least one runner and blew out the windows of a sporting shop.
''Everyone stopped. There was stuff flying all over the place, and then people started running,'' Mr Doherty, from Brisbane, said. ''I said to my mate: 'That's a bomb'.
''Your eyes are fixated on this big plume of smoke as it goes up into the sky,'' he said.
It was followed 15 seconds later by a second blast. ''As soon as the second explosion went off in quick succession, everybody realised things weren't right.''
Policemen began running, urging the crowd to run for cover.
Fearnley, 32, had finished fifth in the wheelchair marathon and was resting at a nearby restaurant when he heard the blasts.  He said he momentarily believed the explosions were thunderclaps, before realising it was a perfect, sunny day.
He went to the restaurant window, which overlooks one of the side streets off the main course, and saw masses of people start to run past.
''It's a bit of a terrible thing, you know, it's a bit of a shocker. You don't expect this sort of stuff to happen when you're sitting outside,'' he told ABC radio.
He said many people had continued running, perhaps unaware of what had happened, but the finishing line had been was closed.
Athletics Australia said in a statement: "Our thoughts and prayers are with all those affected by this devastating tragedy, as well as with the people of Boston who annually host this outstanding event."
Powered by