This report first appeared on the ​The Mental Adventurist website.
Race Date: 14-15th of March, 2020

​Terra Nova 24 is a classic non-stop 24hr adventure race involving trekking, mountain biking, kayaking and other adventure disciplines. Mixed, Male or Female teams of two or four must navigate their way unsupported through an arduous 120+km course that is only revealed to them hours before the race. 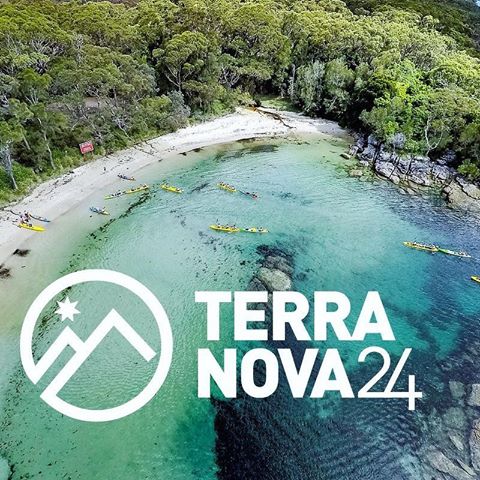 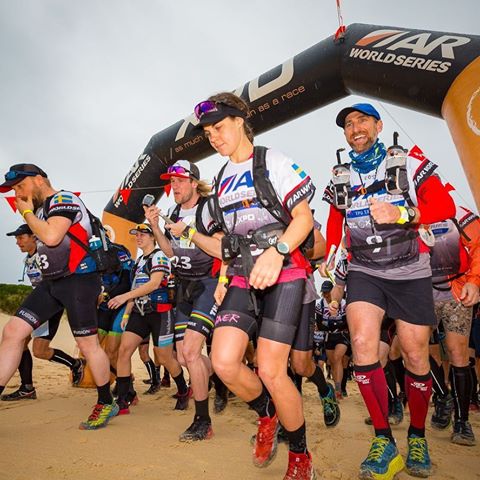 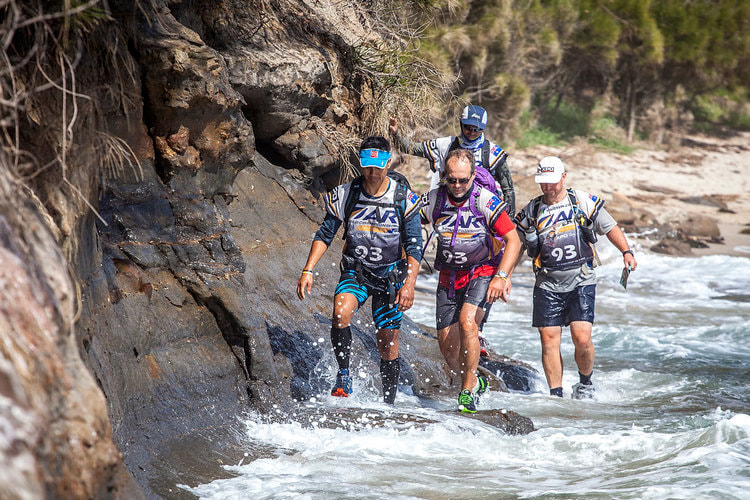 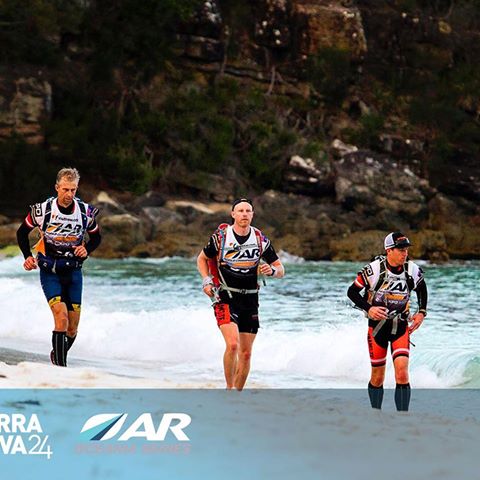 ​Not one to write a long post-race report but hey we’re in isolation so what else are we going to do, and this might be the last race for a while so enjoy.

Having absolutely no idea what to expect as the course details are only given out hours prior to the start we randomly pack our gear and food into boxes marked A & B, ensuring we had all the mandatory items before going to bed. Waking up the next day to howling wind and relentless rain we asked ourselves what the hell are we in for?
Bike and box B drop off at 8am out in the national park of Jervis bay approx. 15km from race start. Back into to Huskisson for registration and 2nd box drop off 9am (to be transported by volunteers to a secret drop off for later use) and we finally get the course details and able to map out our next 24 hours of our life.
First leg is a 4km sea kayak, no worries we got this… at race briefing we’re told due to the strong winds and rough seas in the basin the kayak leg will be modified. You’re still required to complete this leg only you won’t have a kayak to do so. 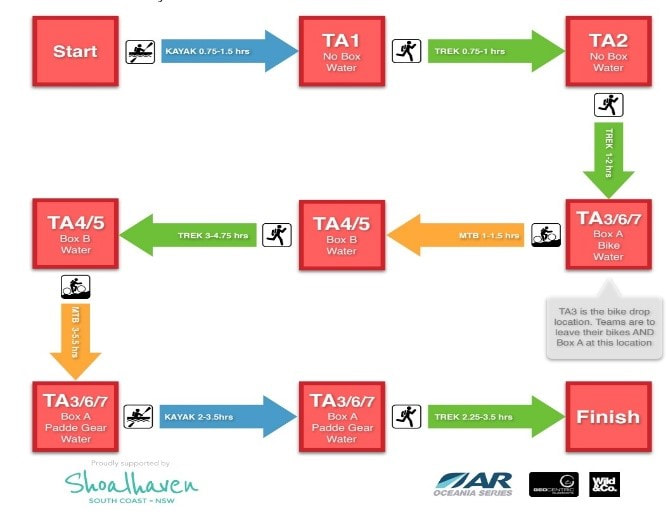 The race started on the main beach at Huskisson, which brought back fond memories 2 week prior when we were racing Big Husky Triathlon Festival 2020. 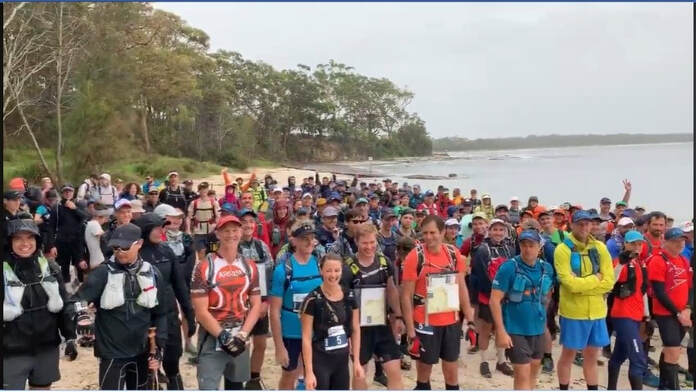 With the kayaks called off this meant coasteering - basically running next to the ocean which in reality meant climbing over rocks, pulling each other up cliffs, wading through water up to our arm pits and jumping off rocks into the surf. If this is what the rest of the race is like we’re going to have a ball, this was way more fun than kayaking, but we weren't going to be staying dry!
We made it to the first check point at Hyams beach where we get our next set of check point clues (clues are for hidden flags/checkpoints (CP) that you must collect along the way, each flag has a stamp which you punch into your control card). You must collect all flag and CP to finish, any missing stamps incur a 2 hour time penalty per missed CP.
The next trail running leg sent us inland with bush so dense we couldn’t see each other 2m apart and sometimes we felt like we were doing the Barkley Marathons not Terra Nova 24. Eventually we made it on foot past the 2nd and 3rd check point.
Leg 4 was the bike, usually my favourite leg of a triathlon but mountain biking is something else. With Ollie in charge of the course navigation we successfully made our way around collecting more flags before hitting Murrays Beach transition. We grabbed our next clues and busted into our box of goodies stocking up before a massive trail run leg. 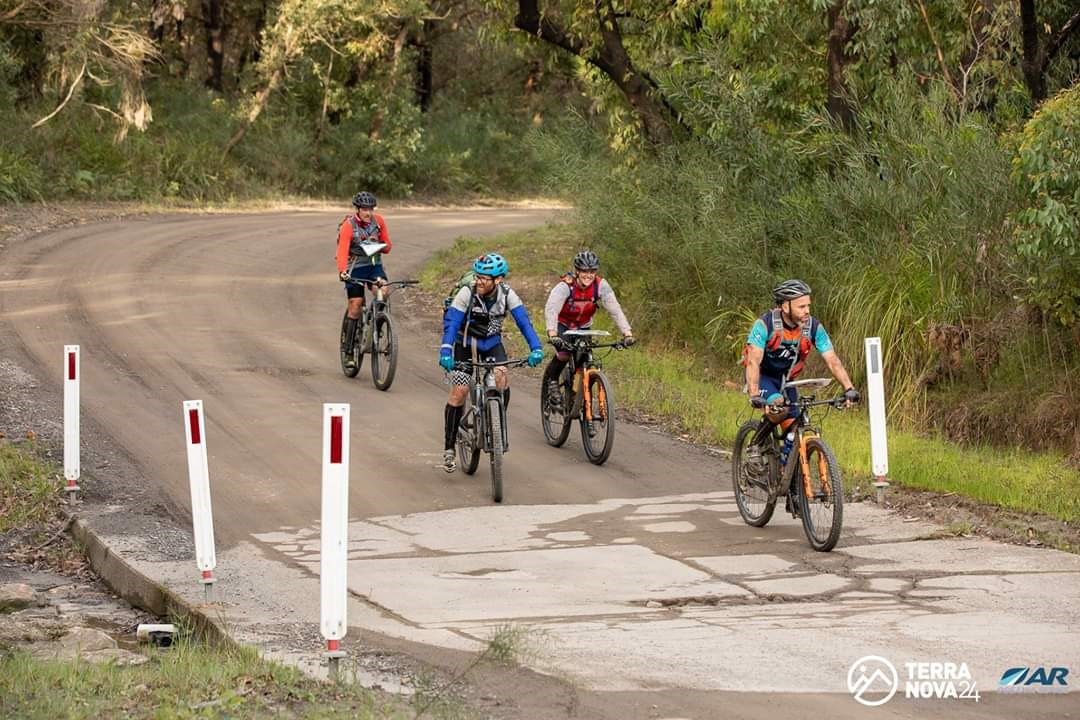 SHIT!!!! I look down and I’ve still got my cycling shoes on and my trail running shoes are back where we started the bike over an hour ago. Rooky mistake! Only one thing to do and that’s to run this leg in bike shoes.
By the time we realise it won't we're committed already - trees and bush so thick we had to climb through them and with the recent fire we were getting covered head to toe in charcoal. We made a decision to head to the cliff top thinking it will be clear there and we’d be able to get through easier…. we were wrong. The bush was just as thick and now the added risk of one wrong move and we’d be practising for the Red Bull Cliff Diving event as well. ​
We could see the light house in the distance, so we carefully made our way but a CP that should have taken us 30 minutes to get to took well over an hour... on the plus side the views out over the cliffs were spectacular.
​Next was check point D and this still gives us nightmares. With the only clue being ‘high point’ we headed obviously headed for the highest point we could see. Once we were there we search and search and search and search and search...you get the idea.
We discussed options but knew ditching it wasn't an option with a straight 2hr penalty for missing a CP.
After reviewing the map and more searching we decided 10 more minutes and then it would probably be worth taking the 2hr hit on our time.
Just as we're about to turn tail Ollie looks over and sees another team searching on the next ridge (maybe 200m away)...maybe we’re in the wrong spot and need to be looking there. We decide to head there and start the search again, a team lets us know we’re in the right area so we stick it out and FINALLY we find the god damn flag and stamp our card.
​Needless to say the last couple of CPs have taken the wind out of our sails, we had been near the front of the pack before these two calamities but we both knew that when the chips are down there's only one thing for it. This is a long race and the past is in the past so lets do this...
The next few CPs weren’t that bad with the last one being ‘hole in the wall’ which was a beautiful rock formation on the beach, then making our way along the coast (still in cycling shoes and my calf’s were now on fire) to transition just before it started to get dark. 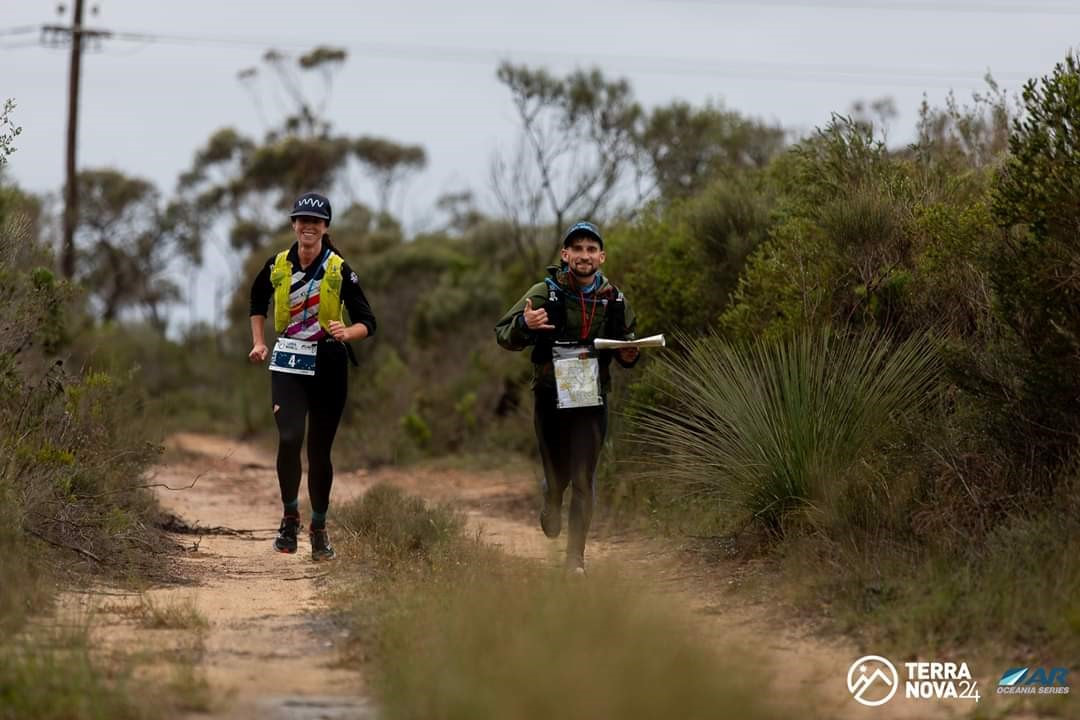 Next was another MTB leg with about 45km to cover on rough undulating terrain and about 30 minutes left of daylight. We quickly rolled towards Sussex Inlet, watching the sun set over the beautiful coast line of Jervis Bay riding around on 2 wheels was a definitely a great way to spend a Saturday night but the dark quickly set in and riding around in the bush looking for flags with little to no experience on riding an MTB quickly became a punish, with gear selection issues and potholes popping out of nowhere in front of you!
About half way through the leg my chain dropped and got severely stuck between the derailleur and big chain wheel - when I say stuck I mean elephant stuck in the eye of a needle kind of stuck.
​We tried and tried to dislodge it, but it was stuck hard. A few teams rode past but none able to offer any assistance. With both of us now thinking ‘this is the end of our race’ we decided the only way we could carry on was to remove the derailleur (with little bike maintenance experience) we improvised and were able to get it loose enough to remove the chain. Then somehow we managed to get it all back together....did we mention it was also dark!
Another 30 minutes lost standing still battered but not broken we're off to CP10 splitting up to get CP10A and CP10B - the only time the team could be more than 100m apart in the race. Over the next 2hrs we successfully collected the rest of our flags then made our way back to transition expecting the kayaking leg up next. 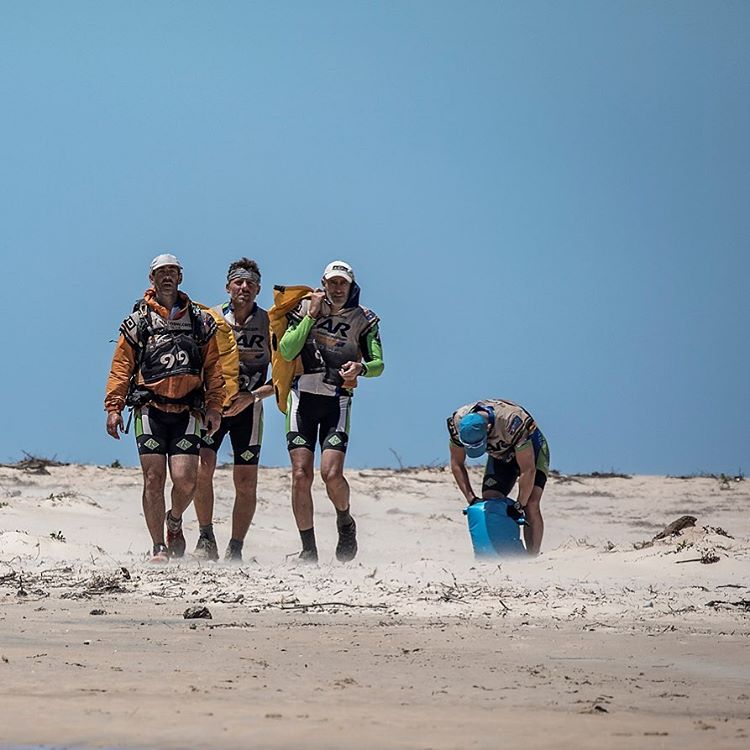 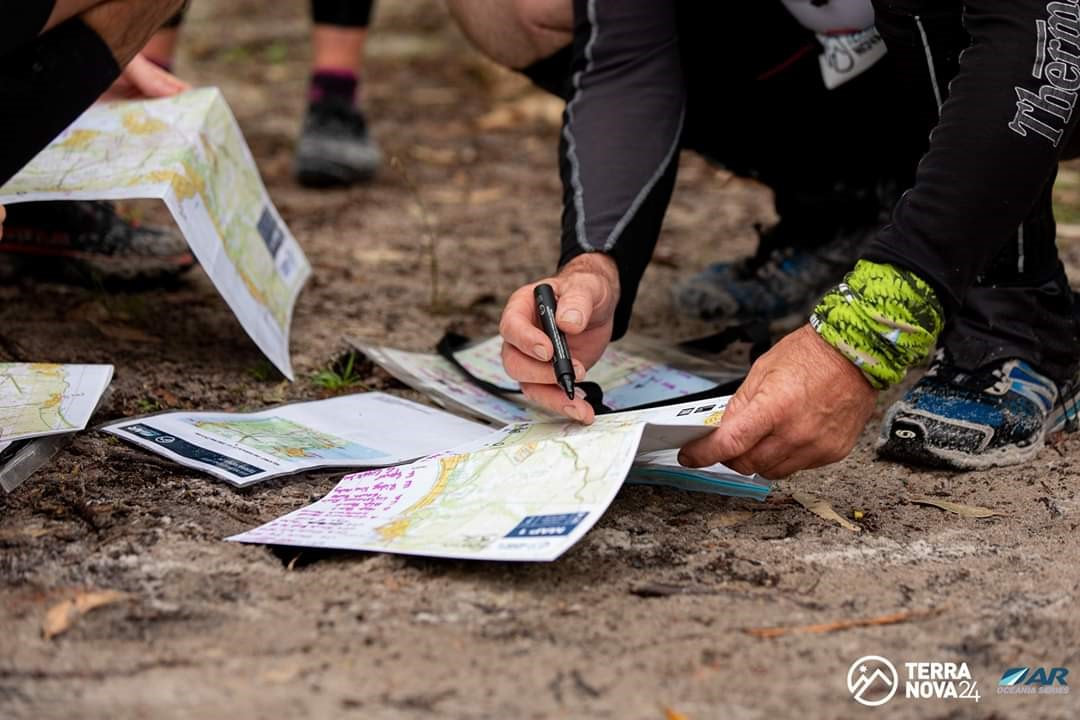 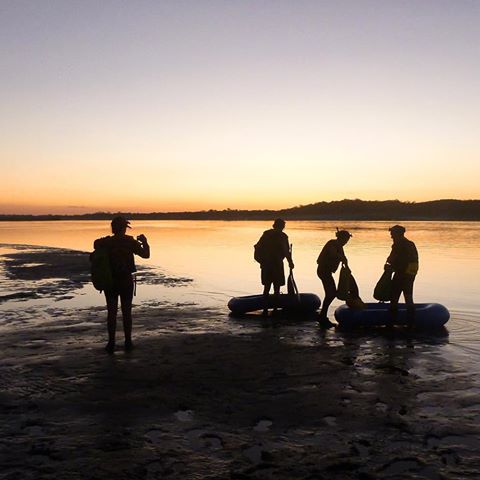 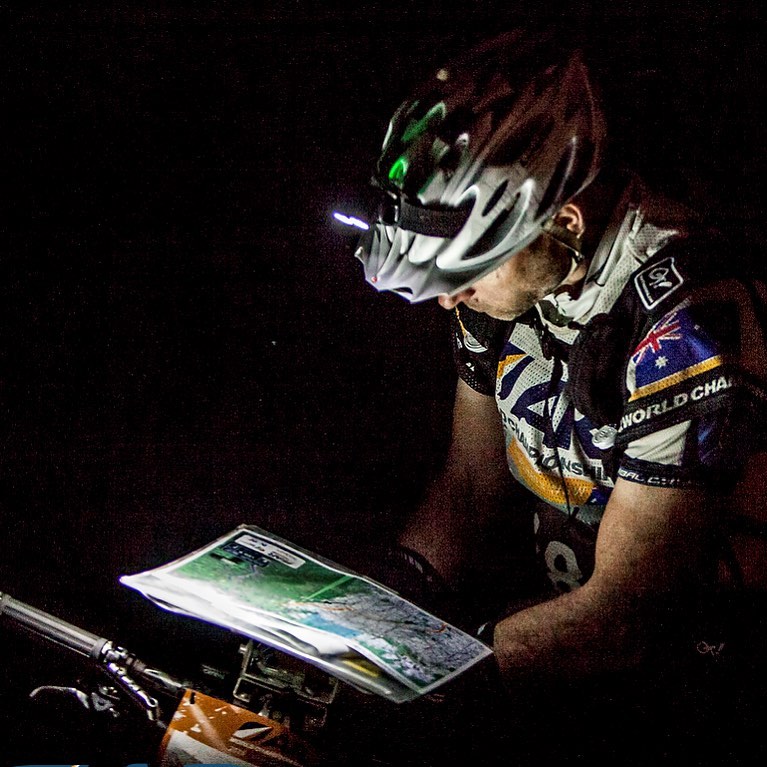 When entering transition, we were both well and truly over biking in the dark and never wanted to see a mountain bike again. We were then told that the wind was still too strong to kayak in the St Georges Basin, so we’d be required to complete the run leg instead, this would finish back in Huskisson where we’d complete the kayaking leg in the protected river.
By this stage we were used to constant change so it didn’t phase us and quickly set out onto the run...this time with trail running shoes.
​Now well over 12hrs into the race and the longest either one of us had completed at anything, we were surprised we could still manage a comfortable jog. We set off into the bushy areas behind the suburbs of Old Erowal Bay, Vincentia and Huskisson.
We soon found ourselves ‘off track’ (the technical term for lost) climbing over logs, piles of loose rock to discourage motorbikes and 4WD access and tracks leading nowhere but we continued on and eventually hit a river. Although this was no where were we needed to be we were able to get our bearings on the map and back track. Phew!! I was completely out of my depths with all this map navigation, but Ollie was all over it again and got us right back to the CP12 (which we later found out was missed by many teams). This really just shows how easily a race can swing back in your favour.
Collecting more stamps and making our way back to Husky at a good pace we were passing a number of teams who were, by now, walking. Once we were back in civilisation we could easily navigate our way around the streets and back relatively easy to HQ which was a little bit defeating to cross the "finish line" only to grab a kayak for one final leg.
Life jackets on, gear in the boat and go to pick up the kayaks, nothing… wow these things are so heavy. Take two and we struggle down to the boat ramp, now around 1.30am we’re off for the last time up Currambene Creek north of Huskisson.
With Ollie only flying back from the UK the day prior his jet lag was now taking over and only just managing to paddle, but he never gave up and about an hour later we were back at HQ but lastly, we still had to carry that bloody heavy kayak back up the hill. Struggling with the kayak we shuffled along and before we knew it we were both uncontrollably shivering from the cold making it even harder.
With the finish line so close we just had to grin and bear it one last time. At 3.45 in the morning, a monstrous 16hrs since we'd set off with a spring in our step we crossed the finish line still shivering so much we could barely give each other a celebratory hug and instead of getting a finishers medal we were wrapped in blankets and sent inside for fear of hypothermia. What an adventure!

They had hot showers which we quickly jumped in to warm up. Finishing a lot quicker than we expected meant we were able to go back to our accommodation and get about 5hrs sleep in before coming back for the presentation and pizza party.
​Very grateful I put full trusted in Ollie to do the navigation, despite taking a few ‘shortcuts’ we successfully gathered all check points without any penalties. Finish time 16hr08min – 7th mixed team (which is the blue riband event in adventure racing) and 11th overall and covered about 117km. Definitely more on the cards but for now that resolve is going to need to see us through this global struggle which we're all in together. See you on the other side for more mental adventures together.
​
Powered by