I first heard about this new trail run when I saw a post from Ingrid Cleland on the Flyers Facebook page. The post piqued my interest, as I had just recently missed getting an entry into the Blue Mountains UTA 50k event – when the entries for UTA opened I was sitting in a church pew at a funeral in New Zealand, and by the time I logged on to enter, the entries had closed, full up!
So – some time later in October – on another trip to NZ (family medical emergency) – I was sitting at the computer ready to hit the button to submit my entry to The Guzzler 50 – and when 10am arrived – nothing happened. Curious, watch checked, yes, 10am……ooops, NZ time. Damn, have to wait another hour!
An hour later, I was one of the first to enter. Within an hour the 50k had filled (250 entrants), and the 100k was the only option. Now began the long wait.

Training up until Christmas was the usual, plenty of Blackbutt parkruns, White Train Sunday runs, and Tuesday and Thursday Number 1 sportsground runs.
January and February were wipe-outs – first (ever) serious injury with foot tendon issues. Not a single kilometre run through those months. March was better with 150kms managed, including many trails through Glenrock, but on 28th March a snapped fibula stopped me in my tracks. The next 6 weeks till mid-May I managed zero kilometres. That left only 2 and a half months to build some fitness (sidebar – happy not to be entered into UTA, no chance of participating!)
​First week back, 45kms (forget that silly rule of building slowly, and increasing by 10% each week – nah, I’ll be right!) Second week, 45kms, 3rd week 34kms, 4th week 82kms then……and by the target date of 27th July (race day) I had managed 550kms – it would have to do…
I flew up to Brisbane on the Thursday prior to the Saturday run, checked out the start and finish areas (nothing, and I mean nothing was prepared – not encouraging!) Then visited some cousins and stayed the night, early to bed. On Friday I spent time chilling with family, had dinner with our Iranian friends Ebrahim and Zohreh (ex Blackbutt parkrun attendees now living in Brisvegas) and had an early night. Checked out the start/finish areas again- and got a $444 speeding ticket right at the start line! (Not happy! Be careful, 50 zone!)

​Crunch time! Just watched the 100km runners depart at 6:30am. Half an hour later, close to 300 x 50km runners took off – first step was uphill, a sign of things to come. Forecast was for 26 degrees most of the day (they were right!) and light winds (no cooling breeze found!)
One kilometre in and the first big hill appeared – called Powerful Owl – a long drag up to and along a ridgeline, lots of ups and downs, then a decline to the Enogerra Dam. Round one side of the dam then on to the first checkpoint at 17km mark. Managed to get here in 2 hours 6 mins, feeling okay, but knowing the bigger hills were still to come. That was the easy bit done (except for the fact that my drinking tube was all twisted, and no water imbibed during the first stint – not good) 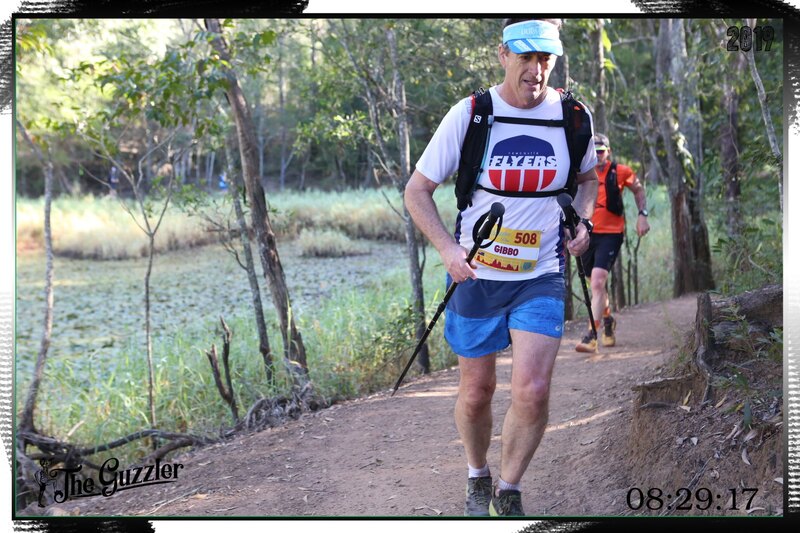 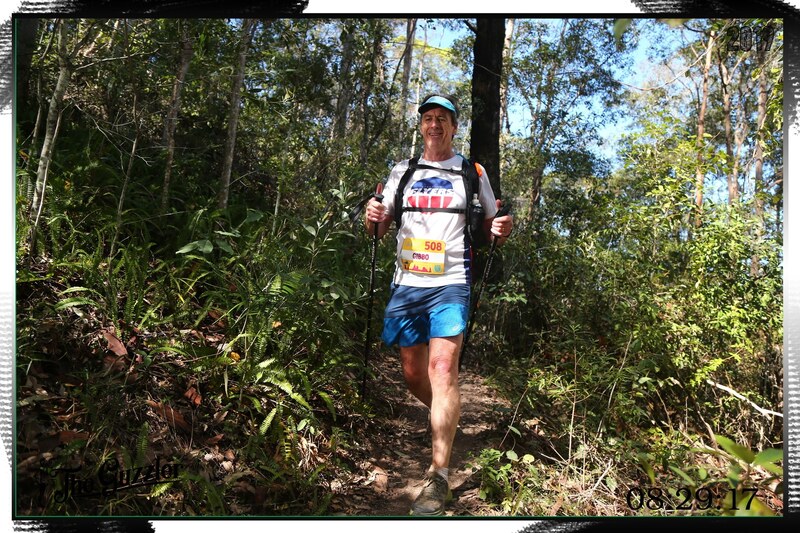 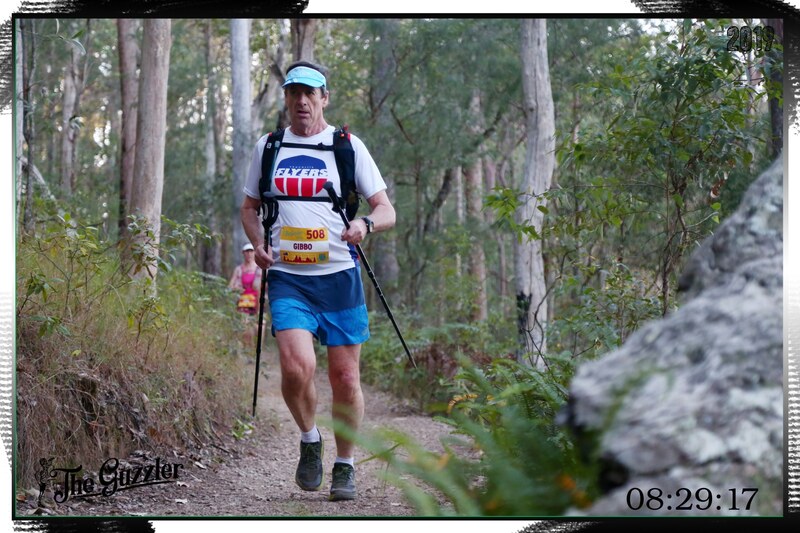 From checkpoint one to checkpoint two at McAfees Lookout was only 7kms – but what a hard 7klms. Steep hills up, steep hills down, nothing else, and overall rising some 300m. At McAfees there was a mandatory gear check, and a 10minute rest was very welcome. Lots of coca cola, tailwind, lollies crammed in.
​Another 2km climb back out of the valley, to yet another ridgeline, more ups and downs (and more and more) then a drop down to The Gap Reserve.

​One more peak to meet – and the word was out that it was the toughest of the lot. Not long, compared with other peaks conquered, but it lived up to its name – Kokoda! And on the hills leading to the REAL climb, I passed a sign saying 5kms to go – say WHHAAT – I’m already at 47k….! Thanks guys, you really mean 52, hey???

Kokoda. What can I say? Four kms from the end, and they hit us with this! Two kms up, and the steepest section encountered all day. Twenty steps forward, hunch over poles, suck in the big ones! Twenty more steps, hunch over poles, suck in the big ones! Twenty more (well, you get the drift…). Thankfully I had some support all around me, encouraging me to the top – crucial at the time!
​From the top, it was a bit over 2kms technical single track pathway down to the finish line….a most welcome sight at the end of 8hours 29minutes (moving time on Suunto says 7:27, the watch died about 500m from the end) and the reward on the finish line was my wife June and daughter Kiara waiting, and a Guzzler mug full of more cola! A quick collapse to the ground, and no more moving for 30 minutes! Results revealed 152nd overall, and 3rd in age group, just 3 minutes behind 2nd in age group. 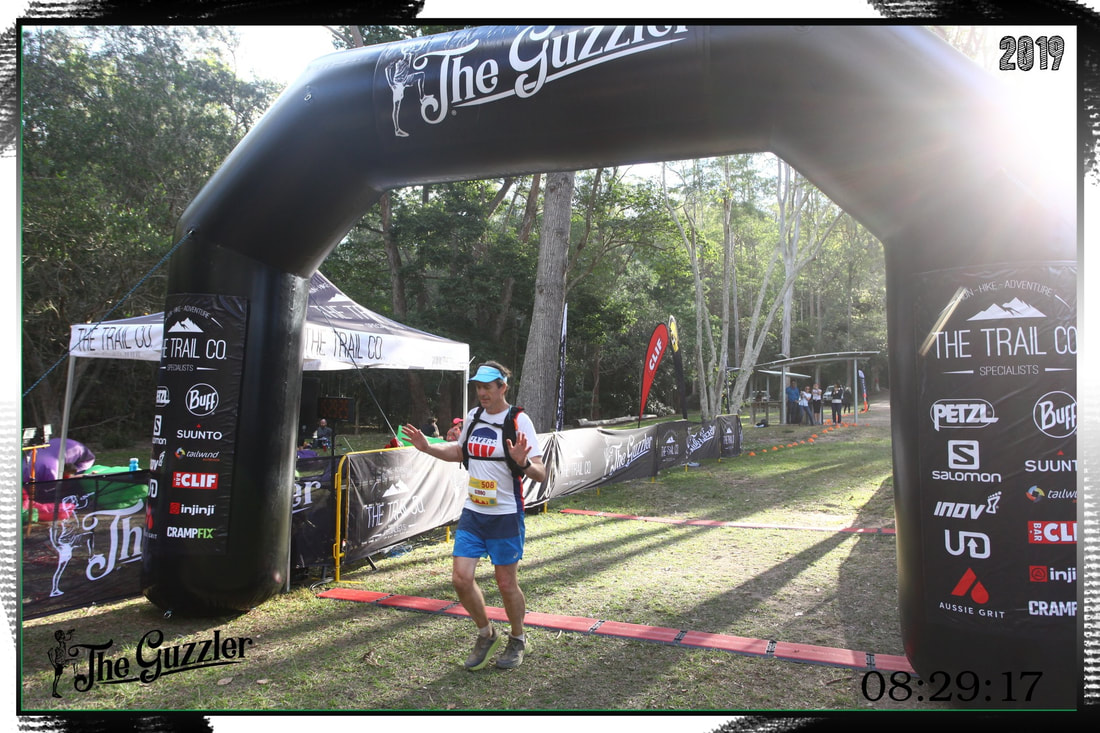 ​Overall 246 finishers in the 50k (winner in 4:09 – Ben Duffus 30mins ahead of 2nd - and last placed in 12:26) and 93 in the 100k (winner in 11:49 and last placed in 26:56)
​Compared with UTA the event is seriously low-key – no ‘event village’, few spectators, a coffee cart and a pizza truck at the end. Another few years of development will no doubt raise the profile of The Guzzler, and in a few years this could be a major trail run destination. Certainly the course is dramatic!
I do encourage Flyers to show the flag next year, as an alternative to UTA in May. Tickets sold out fast – though there was a big trade in tix as people were injured or pulled out. Fifty x 100k tix were cancelled and 50 x 50k were added as this was the much more popular option. I assume next year there will be even more entrants allowed.
​All in all, I am very happy to have entered, participated and finished. By Tuesday I felt fine, no leg soreness, and no regrets (except the speeding ticket!). Hopefully this report will prompt other Flyers for the next episode on 26th July 2020!
Powered by