Race Date: May 18th  Results: 2019
I have been told that my Gold Coast Marathon Race Report holds the record for the longest race report, so I will try and make this one a bit more condensed even though the race was 2 hours longer.
My problem started when Magic Freeman joined my team at Newcastle Permanent. Magic easily replaced my previous lunchtime running buddy Paul Fenton, however there was a difference in running personality and drive. Magic is obsessed with Hills and Ultras, and running on the flat was a necessary evil that was only tolerated in small doses when recovering from injury or as a super easy recovery run.

Now that I was committed, I need to start running bush, and what might surprise you that I hadn’t really run much in Glenrock prior to this little adventure even though I live next door. Hence I started to run as much as I could in Glenrock, exploring as much of it I could, and slowly building my distance.  Robbo thinks I might have a record for the number of miles run in Glenrock this year, Fly-Rocks.

I didn’t have a structured plan for the UTA, but knew that mileage and time of on your the feet were the important keys, hence I settled on a weekly time goals, with quality sessions 2-3 times a week of whatever I felt like.

My first goal was that all runs had to be an hour or more; distance didn’t matter, and if there were some hills in there even better. Run by feel, some days slow, some days faster.

The Seconds goal was to build some leg fatigue resistance, and I borrowed from Magic, James S, and the Dirt Train for their longer runs.  I always tried to either pre-fatigue my legs with a 90 minute run the day before the long run or solid effort the day after; hence the weekends were always made up a good chunk of mileage.

There was a few sessions focused on hills and tempo, but not raw speed, I believe I am fast enough (cough) and just needed to build stamina, speed endurance.
Key Training Sets

I had a good meal the night before at the hotel, all you could eat Paste Buffet, and managed to get to sleep before 9pm which is unheard of for me, and had about 8 hours of sleep.

Pack was loaded with goodies:

Surprisingly I was pretty chilled on race day. No nerves No expectation, only 4 loose goals:

Coach Magic said I was ready for 5:30 and I thought and told he was dreaming.
The Start
Weather was perfect. A couple of Bread Rolls with peanut butter and honey, washed down with double strength instant coffee, and the bus to the start line.

It was a 50km race, why push forward at the start? I took an open position, 10-20 metre back from the start line, maybe mid pack. No stressing needed.
​
The start was smooth and I had a good roll going up the first few km up and down to Narrowneck turn around. I counted the number of people in front and there were about 72 runners ahead. Russel was a good 200-300 metre ahead, which made sense since I started away back from the start line, and he is usually a fast starter. 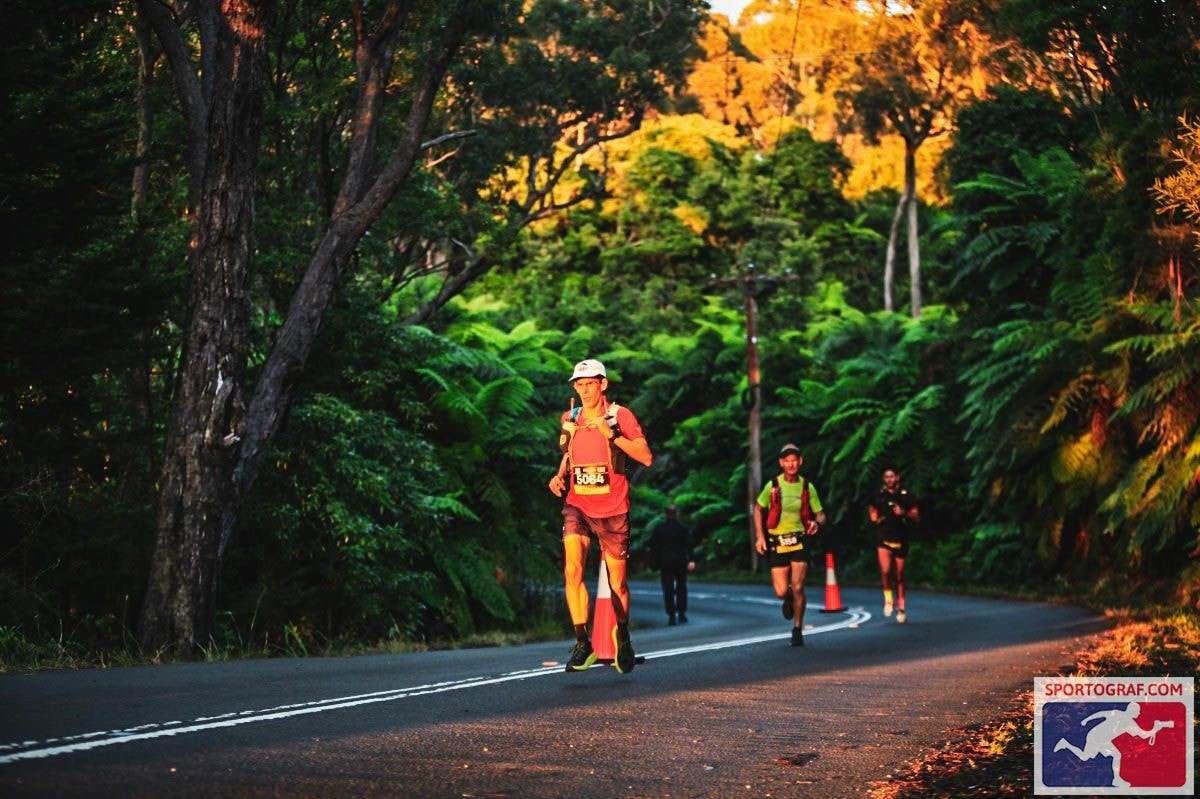 I was surprised how easily I was picking people off coming back up the hill to the sealed road and so I slowed down a little just in case I was getting too confident. Coming down the hill Matt M was marshalling and I made a detour to give him a high five.
​
Coming passed Scenic World I made sure I High Fived as many kids I could. Give positive vibes – Receive Positive vibes.
Giant Stairs to Leura Cascade Steps
Working our way down to The Giant Stairs we all started to self-seed and there was a comfortable gap between each runner leading to the stairs. This was a good sign. The stairs should be free of blockage and should be fast. But I was wrong, as soon as I entered the stairs there was a guy in red blocking it up, right at the top. I couldn’t understand how, there were big gaps between the runners leading up to the stairs. There were maybe 5-6 runners ahead and as I entered, and they soon started to back up behind me. I was expecting myself to be the slow one, but it was slower. Must have lost a few precious seconds if not a minute or two.

It was a relief to finally hit the ground and start running, but it was all single file and the man in red was still blocking the track. No idea what my time was going to be. I was just going with the flow and I wasn’t stressed. I was running top 70. This was easy.

First mistake – dropped a Gel and had to go back for it. Lost my place in the Conga line. Damn.
The Leura Cascade
Magic had warned me that the Cascade had more steps than Furber and they were relentless. The goal was just to survive and not do anything silly, conserve energy and once they were completed I could start to run.

Can’t recall much about this section except my knees were starting to niggle on the downhill sections. I was glad when it started too opened up and was runnable again.

I was very surprise to catch up to Russel at about the 12-13 km mark. I knew he had a good head start on me and I had a slow decent down the Giant Stairs. I ran behind him for a little bit and asked him how it was going. I got a positive reply. I asked to go past and as I was passing he said “It’s a long day”.  This made me double check my pace. Was I going too hard? No. I was going by feel and this was just a Sunday long run, just longer, and I felt pretty good. 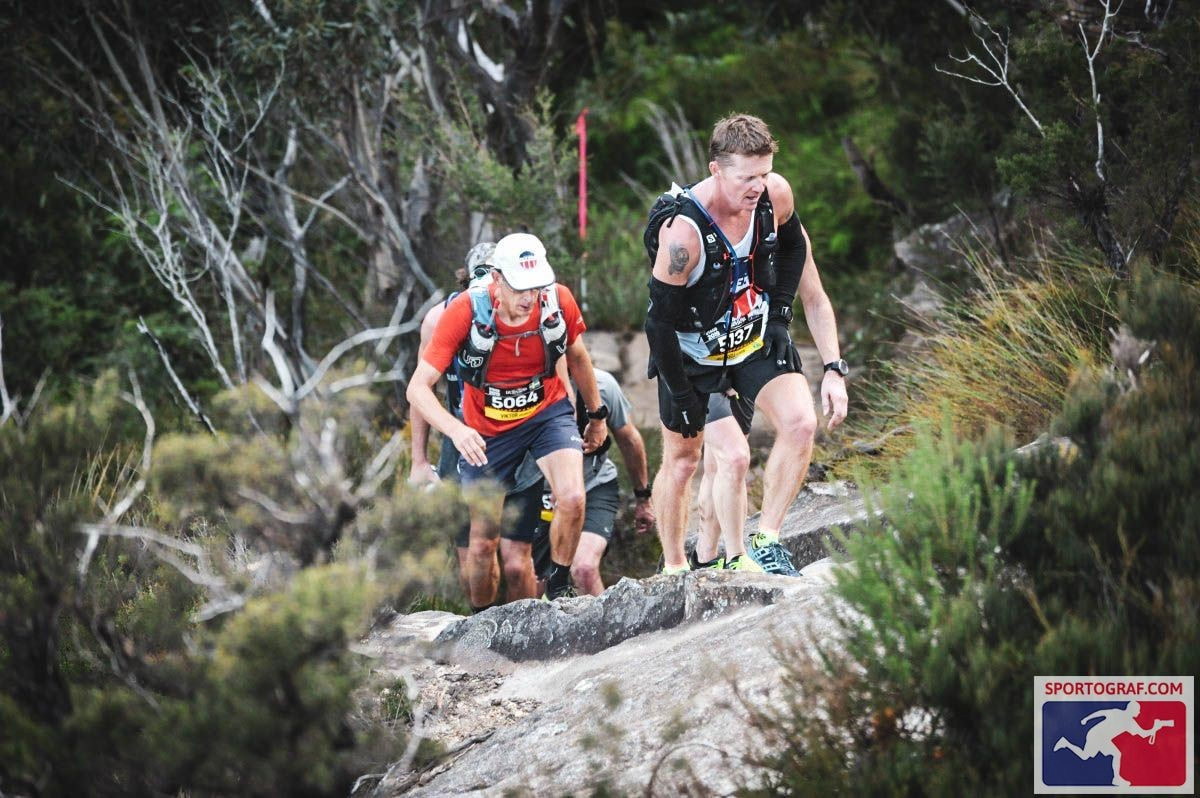 As I worked my way across the top and down I came cross 2 guys chatting away as if this was a Sunday long run.  I had a quick couple of words and one guy said he wouldn’t be out here if he couldn’t go sub 6 and stated he was on pace for 5:30. This blew me away. No fffingway. They let me pass on the downhill/step sections, and off I went. My knees started to niggle a bit more.

It was giant relief to get back on solid ground and join the road section for a km before Fairmount resort. We could see ahead for the first time and I could see my next few victims before the Fairmount resort.
As we got closer to Queen Vic he made small gap, however I was so stocked that I was running a potential 5:30 that I wasn’t going to do anything silly. My knees were still niggling.

As we entered the checkpoint he went straight through. No water. This was to be his mistake.
​
I made sure I topped up and the left to find the fabled Keduma Pass.
Kedumba
They say that Kedumba can break you for the remained of the race and to treat it with respect.

I knew I was in trouble and going to be in even more trouble as soon as the gentle downhill started. My knees were now starting to hurt. Wasn’t the whole problem with Kedumba that you end up frying your quads and you can’t run up out of Leura and Jamison Creek? Shit, my problem had started 6 km too early.

Here I was trying to preserve my knees by varying the pace and stride etc.  I was very surprised that I was all alone, where was everyone? I was passed by 2 people; one guys and later one girl who stopped to have a chat. I said she was moving really fast and she replied that she had to run fast down here because she wasn’t good going up the Furbar Steps. Then bang she was gone as quickly as she had arrived.

Just before Jamison, I caught sight of my running buddy again. Another victim coming up.

Stepping on the pavers to cross the creek was a sign that my knees we going to be a major pain later.

Once I starting run up hill my knee pain went away and I could easily catch a number of people by running and power walking the stepper bits. The First Aid Station surprised me. Here already? The music was playing Happy by Pharrell Williams and I danced into the station to the amusement of the volunteers, and danced out in front of 2 more victims. 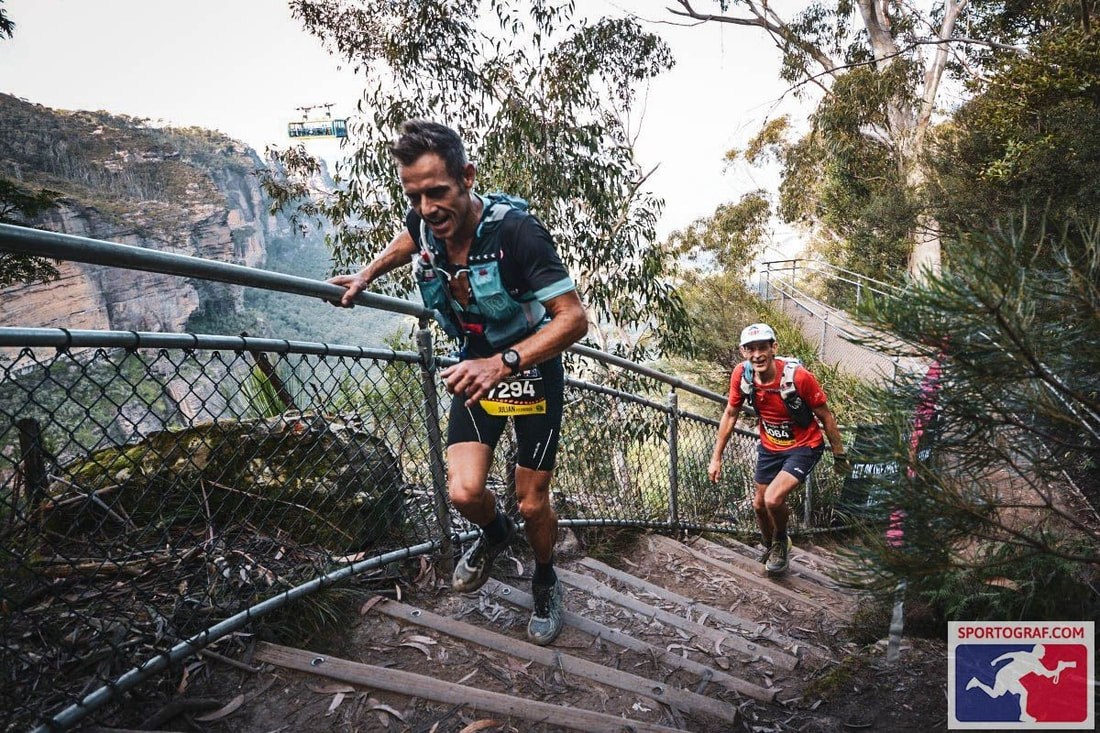 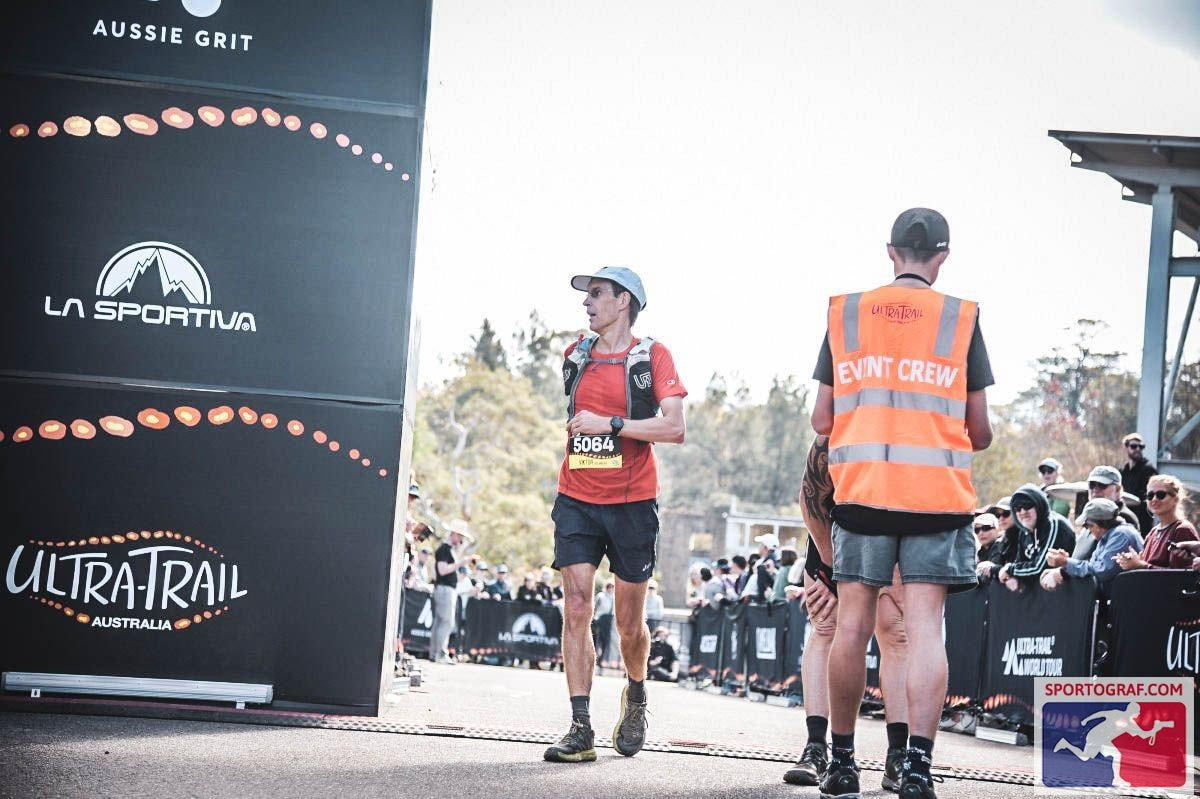